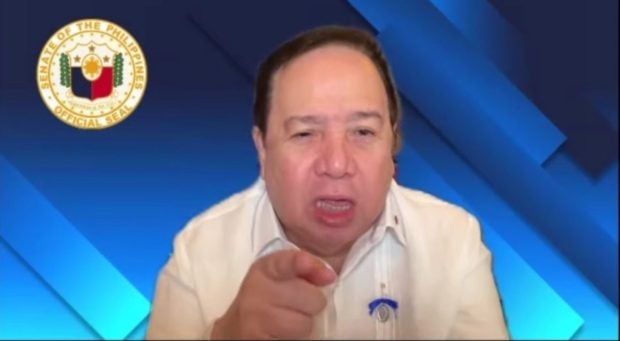 The committee, led by Senator Richard Gordon, made the recommendation in a draft partial committee report released to reporters on Tuesday.

“The nation has been betrayed. While millions are unemployed, have become poorer and hungrier, are desperate even for just a glimmer of hope, what this administration has done is to exacerbate the already execrable and hopeless state the people are all in. None can be more unforgivable,” the draft report read.

“When history is finally written about this moment in our journey as a nation, it will be said that we were the most unfortunate, the most ill-starred, the most blighted to have lived through this maladministration,” it added.

Under its draft partial report, the committee recommended the filing of charges against Duque for alleged violation of the anti-graft and corruption law and the plunder law.

The report noted that Duque had approved the transfer of over P40 billion to the PS-DBM.

“He issued Agency Procurement Requests (APRs) as justification for the transferred funds. However, on examination of the APRs, inherent overpricing is prevalent. For one, the PPEs – ceiling price is at Php 2,000 while the suggested retail price for this particular set of items ranges from Php 900 to Php 1,000,” the report stated.

“Following the ceiling price stated in the APRs, PS-DBM then procured the items at prices a tad below P2,000,” it added.

Duque has previously defended the transfer of the funds to the PS-DBM to make the procurements for them at the height of the pandemic.

INQUIRER.net has contacted Duque for his comment on the blue ribbon committee’s recommendations against him but has yet to receive a response as of writing.

For his part, Lao had earlier told senators that Pharmally was among the companies recommended to the PS-DBM when it used diplomatic channels to find suppliers at the height of the COVID-19 pandemic.

Lao had explained that his team did the “best” it could to ensure that the price of supplies being procured at the time was the “most affordable.”

It was then disclosed that Pharmally had “borrowed money” from Yang to help them fulfill some of the government’s orders in 2020. But the Chinese businessman insisted that his friends, not him, funded Pharmally in some of its contracts with the government.

Atty. Ferdie Topacio, the counsel of one of Pharmally’s officials, has once again slammed the Gordon-led committee, saying the justice system should just be allowed to “take its course.”

“There, in the judiciary at least, my clients will be assured of a fair shake, unfettered by the oppression of the medieval Star Chamber into which Gordon has converted the BRC (Blue Ribbon Committee],” Topacio said in a message to reporters.

“Before the courts, I am confident that the evidence will lead to the eventual acquittal of our clients from the charges recommended by the BRC, whose report is, to quote Shakespeare, ‘full of sound and fury, signifying nothing’,” he added.

Yang’s counsel, Atty. Raymon Fortun, said the conclusions in the draft report have no legal nor factual basis, and done “solely for reelection” and not in aid of legislation.

“Mr. Yang looks forward to the report being handled by an impartial investigation body that would decide the case based on actual evidence instead of hallucinations,” Fortun added.

The blue ribbon committee has been investigating the government’s transactions with Pharmally, which bagged over P8.6 billion in supply contracts in 2020.

Some senators saw alleged favoritism in the awarding of contracts to the firm as they doubted the financial capacity of Pharmally since it was only established in 2019 with a small capital of P625,000 when it secured the medical supply deals.

Pharmally chairman and president Huang Tzu Yen had also denied that they were favored in any way in the government’s procurement of pandemic-related supplies, saying the small company has been “unfairly prejudged.”