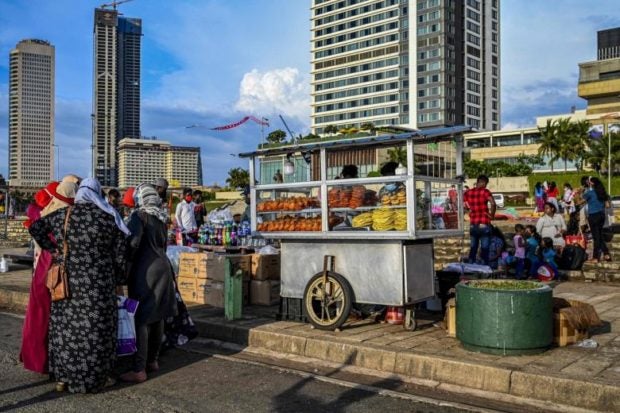 A street food vendor sets up his stall and waits for customers at Galle Face promenade in Colombo, Sri Lanka, on Jan 1, 2022. PHOTO: AFP

BANGALORE — Across Sri Lanka today, supermarket shelves are bare and restaurants are unable to serve full meals due to acute food shortages and high inflation.

Families, like that of travel agent Banduka Karunaratne in Colombo, are eating two meals a day, if at all, and have reined in spending.

Mr Karunaratne has had only one paid job in two years, guiding an Indian American family on a beach holiday last November. “Foreign tourists just disappeared during the Covid-19 pandemic, and so did my dollars,” he said, almost summing up the national situation.

Sri Lanka’s foreign reserves have been dwindling since President Gotabaya Rajapaksa took office in 2019, going from US$7.5 billion (S$10.2 billion) to US$3.1 billion last December, as key tourism income shrank amid the pandemic.

The island nation is facing an economic crisis and bankruptcy this year because there are many demands on that shrinking dollar pie.

As Sri Lankans face acute food shortages and a 14 per cent inflation, a debate is raging on whether the government should prioritise foreign debt obligations over feeding its starving people.

Colombo has nearly US$7.3 billion in foreign debt due this year.

“We have high debt from three countries – China, Japan and India,” said Prime Minister Mahinda Rajapaksa, the younger brother of the President.

Sri Lanka wants to address its low global credit rating by repaying all debts so that it can continue to borrow in the international markets at affordable rates.

But experts and opposition parties believe the government should instead focus its limited foreign exchange on easing people’s struggles by importing essentials such as rice, milk and crude oil for electricity.

Essential supplies have dried up because of many interconnected reasons. 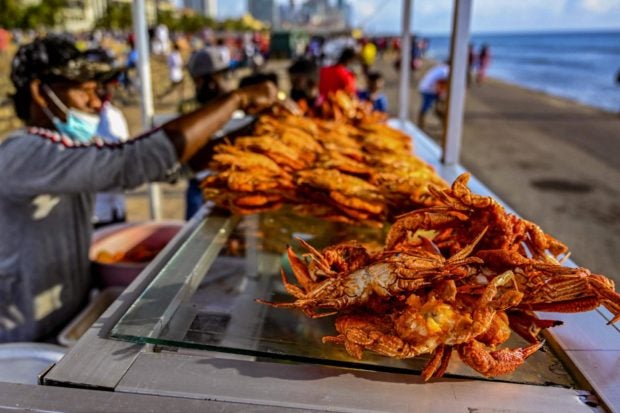 To make up for the shortage, the government has had to import more food, which is increasingly unaffordable given its debt, high infrastructure spending and populist tax cuts.

Food inflation hit a record 21.5 percent in December, up from 16.9 percent in November and 7.5 percent a year ago.

According to World Bank estimates, 500,000 Sri Lankans have fallen below the poverty line since the Covid-19 pandemic, a “huge setback equivalent to five years’ worth of progress”.

Faced with the dreadful choice of either using limited foreign currency to pay off foreign debt or helping citizens by importing staples such as milk, fuel and medicines, the Sri Lankan government has picked the former.

Finance Minister Basil Rajapaksa told the Financial Times that Sri Lanka is “trying all options” to avoid a default.

Plantations Minister Ramesh Pathirana said the government would settle oil debts of US$251 million with Iran by paying them with precious Ceylon tea.

The central bank governor said it would repay all debts as “seamlessly” as it paid a matured US$500 million sovereign bond early last month.

The government’s determination to keep a flawless credit record, however, comes at a direct cost to citizens. Long lines snake through the streets for everything from cooking gas and kerosene to fish, pulses, rice and paracetamol.

On Jan 4, the Finance Minister announced a $1.35 billion economic relief package, including a special allowance of 5,000 Sri Lankan rupees (S$33) a month to 1.5 million government employees, pensioners and handicapped soldiers. Farmers who faced a crop reduction by about 25 per cent were offered compensation.

Policymakers and opposition leaders suggest that Sri Lanka should opt for a bailout from the International Monetary Fund. Some analysts say that Sri Lanka must prepare to default, and then restructure its debt.

The Ceylon Chamber of Commerce (CCC) last month urged the government to change its focus from debt repayments to mitigating hardships of the people.

CCC chairman Vish Govindasamy warned that since the majority of the country’s foreign currency comes from tourism, “we cannot afford to send the world messages of food shortage in the country, it will only be counterproductive”.