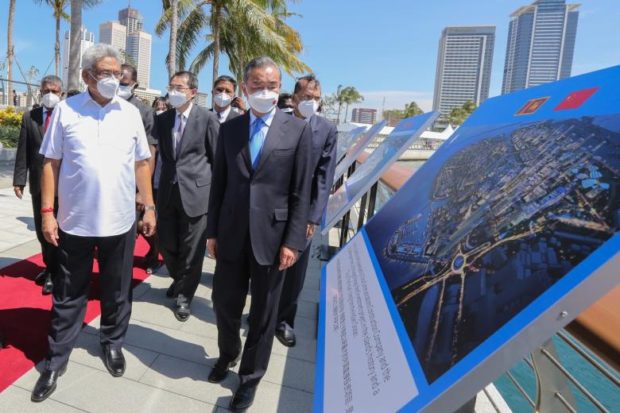 Mr Wang, who is also China’s State Councillor, arrived in Colombo on Saturday for a two-day visit to commemorate 65 years of China-Sri Lanka diplomatic ties and the 70th anniversary of the Lanka-China Rubber Rice Pact, a 1952 trade agreement under which Colombo supplied rubber to Beijing in exchange for rice.

PM Rajapaksa posted on Twitter that he had a “very pleasant meeting” with Mr Wang, “centred around the logistics of facilitating the return of the many (Sri Lankan medical) students to China”, tourism, investments, Covid-19 relief and post-Covid-19 preparedness.

President Rajapaksa thanked him for providing Covid-19 vaccines to the island nation. A majority of Sri Lankans have been inoculated with the Sinopharm vaccine.

Mr Wang’s visit is crucial as it comes during Sri Lanka’s worst financial crisis, with inflation rising to record levels, food prices soaring and foreign exchange reserves running dry. The nation could go bankrupt next year if it does not rebuild currency reserves to import essentials and repay debt obligations of US$29 billion (S$39 billion).

Sri Lanka’s tourism industry, which contributes 10 per cent to the economy, has been in shambles since the 2019 Easter bombing that killed 269 people, including 45 foreigners, followed by pandemic-related travel restrictions. The country has been dipping into its reserves to import fuel, machinery and food.

The Sri Lankan President asked China for help in restructuring debt repayments, and a concessional trade credit scheme for imports.

Sri Lanka owes China more than US$5 billion and last year borrowed an additional US$1 billion.

“Sri Lanka has been in a debt trap, not just borrowing from China and India, but also taking sovereign bonds to get by since 2007. Every five to 10 years, when the bonds mature, the government borrows another one to pay off the previous one,” said senior lecturer Ahilan Kadirgamar at Jaffna University’s department of sociology.

In October last year, the Sri Lankan authorities asked India for a credit of US$500 million for fuel.

Sri Lanka has also done currency swaps with India, China and Bangladesh, and taken loans to purchase petroleum from Oman.

But no country has been more generous than China.

“India is a solid immediate neighbor, the first to respond to any emergency like natural disasters or civil war, but China is the keen business partner Sri Lanka needs, with the capacity and will to invest big,” said Mr George Cooke, founder of Colombo-based think-tank Awarelogue Initiative.

When projects that China has invested in underperform, “Sri Lanka has been driven to agree with Chinese lenders to hand them the management of the same”, said former central bank governor W.A. Wijewardena.

For instance, China was the only country that agreed to finance a port in southern Hambantota, PM Rajapaksa’s home town, even though feasibility studies called it a dud. By 2017, the Rajapaksa government faced allegations of kickbacks from Beijing and the port predictably lost money and had to be sold along with 6,070ha of nearby land to a state-owned Chinese firm on a 99-year lease to repay the loan.

Relations between the two countries hit another roadblock last year when Sri Lanka rejected a Chinese shipment of organic fertilizer that local farmers and some experts claimed was contaminated.

The Sri Lankan commercial high court blocked payment for it and, in turn, China blacklisted the Sri Lankan state bank.

A US$1.5 billion yuan swap from China helped the island boost its reserves to US$3.1 billion at the end of December.

Debt repayment to China in 2022 is likely to be smaller than its ISB commitments of US$1.54 billion, at about US$400 million to US$500 million, a Sri Lankan finance ministry source told Reuters.

Sri Lanka’s central bank has repeatedly assured all debt repayments will be met and said funds for the January ISB has already been allocated.