Singapore expresses concern about situation in Myanmar, one year after coup | Inquirer News

Singapore expresses concern about situation in Myanmar, one year after coup 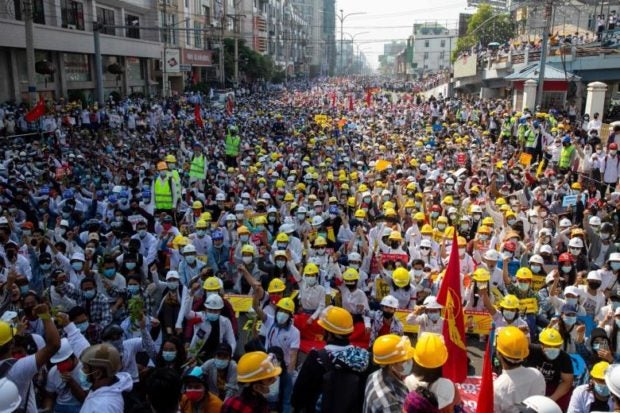 In this file photo taken on Feb 22, 2021, protesters take part in a demonstration against the military coup in Mandalay. PHOTO: AFP

SINGAPORE — Singapore remains deeply concerned about the situation in Myanmar, a year after the military coup, and expressed disappointment over the lack of progress in implementing the Asean “five-point consensus”.

On the one-year anniversary of the Feb 1 coup, Singapore’s Ministry of Foreign Affairs (MFA) noted that conditions for the people in Myanmar continue to deteriorate.

“We urge the Myanmar military authorities to swiftly and fully implement the five-point consensus, including by facilitating the Special Envoy’s visit to Myanmar to meet with all the parties concerned,” the ministry said in a statement.

Cambodia is the Asean chair this year and has nominated Foreign Minister Prak Sokhonn as Asean’s special envoy on Myanmar.

Myanmar has been mired in political conflict since the military seized power, triggering massive demonstrations that have since morphed into armed insurgency in various parts of the country. At least 320,000 people have been displaced nationwide and millions are at risk of poverty and hunger.

Under an Asean “five-point consensus” hammered out in April last year, the special envoy is tasked with meeting and helping to facilitate constructive dialogue among all parties concerned in Myanmar’s political crisis. The blueprint also calls for violence to cease, and for humanitarian aid to be facilitated.

Asean member states last October resolved to limit Myanmar to a “non-political representative” at its meetings pending significant progress on its blueprint. As a result, Myanmar was not represented at several of the grouping’s summits last year.

The MFA also urged the Myanmar military authorities to avoid actions that would be inimical to eventual national reconciliation in Myanmar.

Singapore to contribute $100,000 to Asean efforts to aid Myanmar