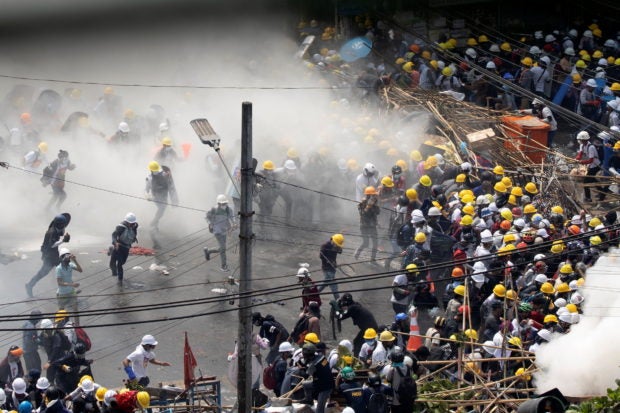 Tear gas and fire extinguisher gas float around demonstrators during a protest against the military coup in Yangon, Myanmar, March 2, 2021. Picture taken from behind a window. REUTERS/Stringer

Myanmar’s neighbors pressed its ruling military on Tuesday to release ousted leader Aung San Suu Kyi and cease what Singapore called the disastrous use of lethal force against opponents of their February 1 coup and work out a solution to the crisis.

The calls from fellow members of the Association of Southeast Asian Nations (ASEAN) came as Myanmar police again opened fire to disperse crowds after weeks of demonstrations against military rule. Several people were wounded, witnesses said.

ASEAN foreign ministers held talks with a representative of the junta in a video call two days after the bloodiest day of unrest since the military overthrew Suu Kyi’s elected government.

At least 21 people have been killed since the coup, which Singapore Prime Minister Lee Hsien Loong said in an interview with the BBC was a “tragic” step back for Myanmar.

The foreign minister of Indonesia, which has been pushing a regional diplomatic effort, urged Myanmar to “open its doors” to the ASEAN bloc to resolve the escalating tension.

Speaking to reporters in Jakarta, the minister, Retno Marsudi, called for the release of political detainees and for the restoration of democracy, while pledging that ASEAN countries would not break their pledge of not interfering in each other’s affairs.

“Restoring democracy back on track must be pursued,” Retno said.

“Indonesia underlines that the will, the interest, and the voices of the people of Myanmar must be respected.” 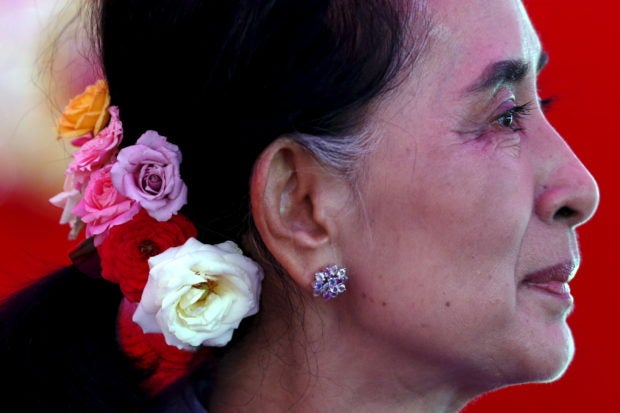 The bloc’s effort to engage with Myanmar’s military has been criticized by supporters of democracy, with a committee of ousted Myanmar lawmakers declaring the junta a terrorist group and saying ASEAN’s engagement would give it legitimacy.

Sa Sa, the committee’s anointed envoy to the United Nations, said ASEAN should have no dealings with “this illegitimate military-led regime.”

The coup halted Myanmar’s tentative steps towards democracy after nearly 50 years of military rule and has drawn condemnation and sanctions from the United States and other Western countries.

Singapore’s Lee said sanctions would not affect the junta but hurt the people and the way forward was to free Suu Kyi and work out a solution.

“To have to go back and have the military take over again … it is an enormous tragic step back for them. Because there is no future that way,” Lee said in the interview, according to a transcript.

“To use lethal force against civilians and unarmed demonstrators, I think it is just not acceptable. That is disastrous not just internationally, but disastrous domestically.”

Malaysian Foreign Minister Hishammuddin Hussein called for the immediate release of Suu Kyi and other detainees, adding that if the situation worsened, it would be a setback for regional peace, stability and prosperity. 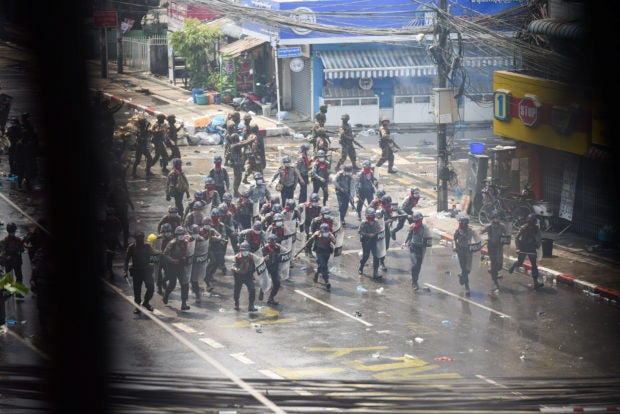 Riot police officers intervene during a protest against the military coup in Yangon, Myanmar, March 2, 2021. Picture taken from behind a window. REUTERS/Stringer

There were no reports of injuries in Yangon but four people were wounded in the northwestern town of Kale, where police fired live ammunition to disperse a crowd after protesters threw objects at advancing police, witnesses said.

“They were acting like they were in a war zone,” a teacher at the protest said of the police.

The teacher, who declined to be identified, and other witnesses said that as well as the four wounded by live ammunition, several people were hurt by rubber bullets.

Hospitals and police in the area could not be reached for comment. Military spokesmen did not answer telephone calls.

The military justified the coup saying its complaints of fraud in a November election won by Suu Kyi’s party were ignored. The election commission said the vote was fair.

Min Aung Hlaing has pledged to hold new elections and hand power to the winner but has given no time frame.

Suu Kyi, 75, appeared at a court hearing via video conferencing on Monday and looked in good health, one of her lawyers said. Two more charges were added to those filed against her after the coup, the lawyer said.

The Nobel Peace laureate has not been seen in public since the coup.

Hundreds of people have been arrested, according to activists, among them six journalists in Yangon, one of whom works for the Associated Press, said Tin Zar Oo, a lawyer for the AP journalist.