newsinfo / Nation
Nation
‘If that would appease Filipinos, why not?’ 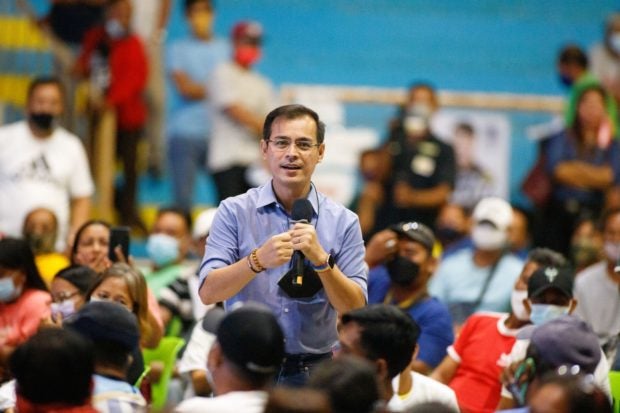 MANILA, Philippines — Manila Mayor Isko Moreno Domagoso said on Monday that he does not see any problem with the investigation into the country’s war on drugs if it would allay concerns from Filipinos and done within the jurisdiction of the local courts.

Moreno, during the official launch of his 10-point economic agenda, said that he would allow drug war investigations if he is elected president as long as it is bound by the country’s laws and Constitution — in reference to his insistence that the International Criminal Court (ICC) cannot prosecute President Rodrigo Duterte.

“Will our government initiate such a probe?  Yes, why not, bakit hindi kung talagang mapapanatag ko lang ang damdamin ng bawat isa [if that would satisfy the clamor of our people], why not?  Under our rules, under our laws,” he said in a press conference on Monday.

But Moreno stressed that while he sees no problem with the ICC doing an investigation into the drug war in the country, bringing Duterte before their courts is another concern as the Philippines’ justice system is very much alive and functioning.

The Aksyon Demokratiko standard bearer said he believes ICC can only intervene when the state’s justice system has already collapsed.

“One, the entry of ICC, the question of prosecuting President Duterte is too far different.  One, entry, you’re (ICC) welcome, you come here.  You want to investigate?  Go ahead, wala tayong problema [we don’t have a problem],” he claimed.

“And you ask your lawyer, can ICC prosecute any Filipino in the country, as a state with an existing, running, and effective justice system?  Do we have MTC [Metropolitan Trial Court], do we have MTC, do you all agree?  We have RTC [Regional Trial Court]? […] These are existing courts and the justice system is intact in the Philippines,” he added.

Moreno said he would neither hand over Duterte even if the ICC finds him guilty for committing the crime against humanity of mass murder, noting that it is the job of a sitting president to protect Filipinos from possible abuse.

“Hand him over, no.  My job — see, this is where leadership comes in — my job as a president, future tense lang tayo, elected president, my job is to protect you from any abuse, harm, and your rights ay binibigay sa’yo whether nasa Pilipinas ka, or nasa ibang bansa ka.  Bahagi ng trabaho Presidente proteksyunan ka [whether you are in the Philippines or in other country. Part of the President’s job is to protect you],” he said.

“As far as I believe ICC cannot prosecute somebody in our country, Philippines, with an existing justice system.  They can only interfere in disturbed countries […] All Filipinos will be prosecuted if, and if, cases will be filed against them, in our court, in Philippine court, under our constitution,” he added.

Duterte is currently facing a possible investigation after the ICC Pre-Trial Chamber approved the request of former prosecutor Fatou Bensouda to proceed with a full-blown probe of the President and his anti-drug campaign.

The impending probe is based on complaints filed by administration critics including former senator Antonio Trillanes IV and drug war victims from the Rise Up for Life and Rights, claiming that mass murder was committed in the drug war.

According to the petitioners, Duterte has violated Article 7 of the Rome Statute for widespread and systematic attacks in the form of murder of thousands of civilians during the government’s anti-drug program.

So far, police officers have only been held accountable only one operation — that of teenager Kian delos Santos where three Caloocan police officers were found guilty of murdering him, as the youngster was summarily executed contrary to accounts that he fought back against officers.

The court also affirmed that delos Santos was not the original target of the operation.

As of October 2021, 6,215 individuals have died in legitimate anti-drug operations, but groups claim that the number could be well between 12,000 to 30,000 — including victims of alleged extrajudicial killings.

The government, however, has constantly denied involvement in the extrajudicial killings, with Duterte at one point saying that it was warring drug gangs responsible for the deaths.

But recently, ICC suspended its investigation after the Philippine government asked for a deferral of the probe as there are domestic efforts to resolve issues in the drug war.