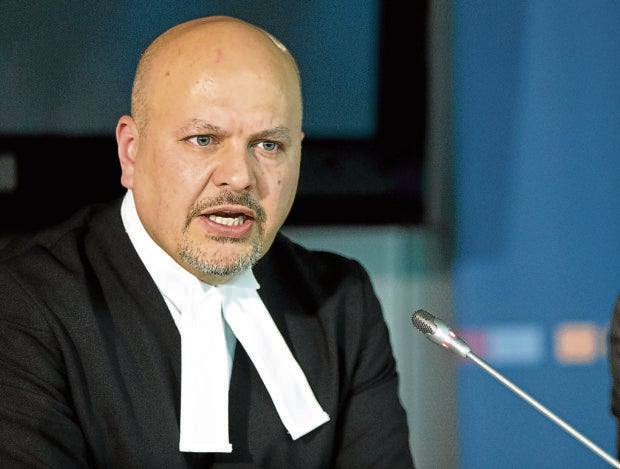 MANILA, Philippines — The International Criminal Court has suspended its investigation into the Duterte administration’s war on drugs following the request of the Philippine government to defer its probe on the alleged commission of crimes against humanity.

The ICC’s Office of the Prosecutor has notified the Pre-trial Chamber of the suspension of its investigation, with a reservation that it will proceed in the coming days upon assessment of the “scope and effect” of the request to defer the probe.

“The Prosecution has temporarily suspended its investigative activities while it assesses the scope and effect of the deferral request,” a report of ICC Prosecutor Karim Khan read. 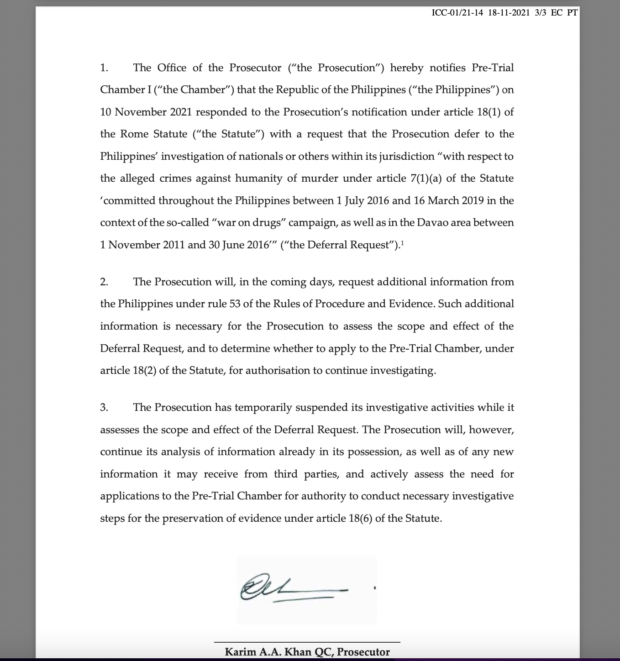 An excerpt of the ICC’s report on the deferral of investigation into the Duterte drug war killings.

The ICC Prosecutor however said that his office will continue its analysis of information already in its possession, and any new information it may receive from third parties, as well as “actively assess the need for applications to the Pre-Trial Chamber for authority to conduct necessary investigative steps for the preservation of evidence.”

“The Prosecution will, in the coming days, request additional information from the Philippines under Rule 53 of the Rules of Procedure and Evidence. Such additional information is necessary for the Prosecution to assess the scope and effect of the Deferral Request, and to determine whether to apply to the Pre-Trial Chamber, under Article 18(2) of the Statute, for authorization to continue investigating,” Khan stated.

Earlier the Philippine embassy in The Hague, Netherlands formally asked that the probe be deferred to give way to domestic efforts to investigate these crimes. This, after the administration had ignored calls to answer to allegations of state-sponsored killings in relation to the implementation of President Rodrigo Duterte’s drug war.

The Philippines, a state party to the Rome Statute since November 1, 2011, formally notified the body of its  withdrawal from the statute on March 17, 2018.

But while its withdrawal took effect only a year after or on March 17, 2019, the ICC retains jurisdiction with respect to alleged crimes that occurred on the territory of the Philippines while it was a State Party, from November 1, 2011 up to and including March 16, 2019.

“While the relevant crimes appear to have continued after this date, Pre-Trial Chamber I noted that alleged crimes identified in the Article 15(3) Request were limited to those during the period when the Philippines was a State Party to the Statute and restricted the authorized investigation to that period,” the ICC had said earlier.