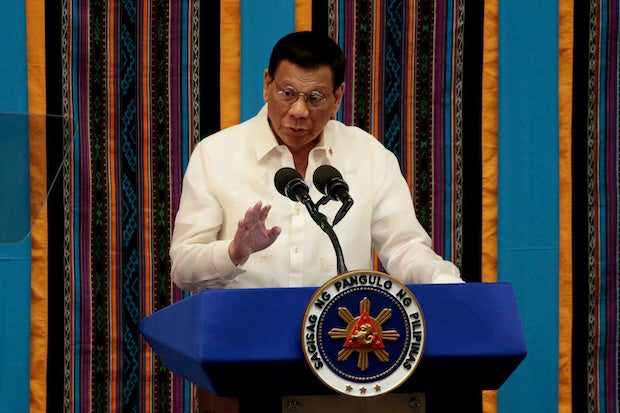 Philippine President Rodrigo Duterte gestures during his fourth State of the Nation address at the Philippine Congress in Quezon City, July 22, 2019. (File photo from REUTERS)

MANILA, Philippines — The Pre-Trial Chamber I of the International Criminal Court (ICC) has approved the start of the probe into the crimes against humanity cases filed against President Rodrigo Duterte in connection with the drug war killings, the ICC announced on its website on Wednesday.

The probe will cover crimes committed from Nov. 1, 2011, to March 16, 2019. In 2011, Duterte was vice mayor of Davao City. He had to give way to his daughter, Sara Duterte-Carpio, for the top position due to term limits. He was elected president in the May 2016 elections.

“The Chamber found that there is a reasonable basis to proceed with an investigation, noting that specific legal element of the crime against humanity of murder under Article 7(1)(a) of the Statute has been met with respect to the killings committed throughout the Philippines between 1 July 2016 and 16 March 2019 in the context of the so-called ‘war on drugs’ campaign, as well as with respect to the killings in the Davao area between 1 November 2011 and 30 June 2016,” the ICC said in its decision.

In 2018, Duterte declared the Philippines’ withdrawal from the Rome Statute. The withdrawal took effect on March 17, 2019.

Since then, the president has repeatedly said that he would not cooperate in any ICC investigation. The Rome Statute which created the ICC had no legal effect as it was not published in the Official Gazette and that the country had already withdrawn from the treaty, he argued.

But according to the ICC,  it still has jurisdiction over the alleged crimes because they took place from Nov. 1, 2011, to March 16, 2019 — when the Philippines was still a signatory of the statute.

The judges said that relevant crimes appeared to have continued after that date, but that the court was limited to investigating those suspected to have occurred while the Philippines was a member.

The Supreme Court also voted unanimously in July this year that Duterte could not invoke the Philippines’ withdrawal from the Rome Statute to evade investigation by the ICC prosecutor.

The high court ruled that the Philippines was bound to recognize the jurisdiction of the ICC and cooperate with its processes even after its withdrawal from the Rome treaty.

On Aug. 29, the ICC reported that 94 percent of the 204 representations filed before the court supported a formal investigation of the crimes committed in the president’s anti-drug campaign.

The withdrawal from the Rome Statute took effect in March 2019, thus the crimes attributed to Duterte were reckoned up to that date.

In its report last month, the ICC said almost all of the families that accused the president of instigating the killings wanted accountability and justice.

The government acknowledged that around 7,000 people had been killed by the police in the drug war since Duterte took office in 2016, but local and international human rights groups said the real figure was 12,000 to 30,000, including killings by state-backed vigilantes.

In Wednesday’s ruling, the ICC judges approved the request by their prosecutor Bensoud to begin the investigation into potential murder as a crime against humanity.

Their assessment of material presented by prosecutors, who had asked for permission to investigate, was that “the so-called ‘war on drugs’ campaign cannot be seen as a legitimate law enforcement operation,” but rather amounted to a systematic attack on civilians.

Human rights groups accuse Duterte of inciting deadly violence and say police have murdered unarmed drug suspects on a massive scale as part of the campaign.

Police deny this, and Duterte says the police are under orders to kill only in self-defense.

In July, Duterte attacked the ICC, saying he would continue his fight against drugs.

“I have never denied [it], and the ICC can record it: Those who destroy my country — I will kill you,” he said.

—WITH A REPORT FROM  REUTERS

Withdrawal from ICC no free pass for Duterte, says ex-judge