Withdrawal from ICC no free pass for Duterte, says ex-judge 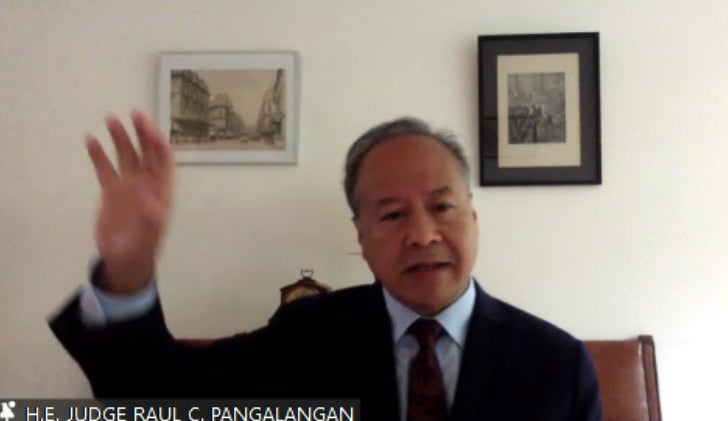 MANILA, Philippines — The Philippines’ withdrawal from the Rome Statute is not a free pass for President Duterte to escape the judicial mantle of the International Criminal Court (ICC) or evade accountability for the deaths of thousands of alleged victims of his brutal war on drugs, according to former ICC Judge Raul Pangalangan.

But Pangalangan, the first Filipino to sit as judge in the international tribunal, conceded that the ICC does not have its own law enforcers to implement arrest warrants against individuals indicted for committing crimes against humanity.

Speaking in an online forum on Friday, he said Article 127 of the Rome Statute—the international treaty that created the ICC—clearly stated that the withdrawal of a state-party did not excuse it from cooperating with the court’s processes.

A day before she stepped down last week, ICC Prosecutor Fatou Bensouda announced that she had requested the ICC pretrial chamber to open a formal investigation of charges of crimes against humanity involving murder against Duterte in his war on drugs.

Malacañang said Duterte would not cooperate with the probe since the Philippines had already bolted from the treaty in 2019.

“When [we] signed the statute [in 2011], we agreed to the terms laid down in the statute,” Pangalangan said.

Pangalangan, a former dean of the University of the Philippines College of Law who was elected by his colleagues as president of the ICC Trial Division in 2019, said the legal concept was applied in the case of Burundi, the first nation that left the ICC in 2017 following the violent crackdown by state forces against critics of then President Pierre Nkurunziza.

He said Burundi was among the first cases he handled as a member of the ICC pretrial chamber.

“When (Bensouda) asserts her jurisdiction over crimes committed while the Philippines is still a member of the Rome Statute until March 2019, she is squarely invoking the application of Article 127,” said Pangalangan, who retired as ICC judge last month.

Duterte ordered the country’s withdrawal from the Rome Statute in March 2018, a month after Bensouda announced that she would start a preliminary examination of the complaints against him. The withdrawal took effect a year later.

Pangalangan, also a former Inquirer publisher, said the cooperation of state-parties to the Rome Statute was needed in enforcing the orders and decisions issued by the 18-member international court based in The Hague. The Philippine government’s action was not yet needed at this point since the ICC has yet to grant Bensouda’s request, he said.

“Is there a global police by which the ICC orders arrest to be carried out? There’s no such thing in international law, in general, and no such thing for the ICC, in particular,” he said.

“[That question] captures the dilemma [of the ICC]. We need the cooperation of states,” he said.Such cooperation was demonstrated by the United States when US soldiers captured a Ugandan rebel leader who was indicted for war crimes in the ICC and then turned him over to the Ugandan government, said Pangalangan. He noted that the US was not even a member of the ICC.

Speaking in the same forum, Ruben Carranza, a senior staff of the International Center for Transitional Justice, said exacting accountability for the thousands of drug war killings was not a simple process.

A guilty verdict from the ICC on the President and his subordinates who carried out his bloody campaign is “such a distant prospect right now,” he said.“It’s important to manage everyone’s expectations,” said Carranza, who was a commissioner of the Presidential Commission on Good Government that was tasked with recovering the ill-gotten wealth of dictator Ferdinand Marcos and his family and cronies.

He cited the case of former Sudanese President Omar al-Bashir, who was ordered arrested by the ICC in 2009 for genocide, war crimes and crimes against humanity for the deaths of over 10,000 of his countrymen during the Darfur war.

Al-Bashir was arrested only after he was ousted in a revolution in 2019, which was inspired by the “Arab Spring” protests. It took a year before Al-Bashir was handed over to the ICC by the new Sudanese government to stand trial.

“What led to the accountability for Al-Bashir? A revolution in his own country … his ouster by people who refused to leave the streets of Sudan until he was removed from power,” Carranza said.

“So, it’s not the law and lawyers that lead to justice. It’s the people—be it the victims of the drug war or the Sudanese people against an authoritarian leader,” he said.

Arrest warrants from the ICC are not enough to hold corrupt leaders and dictators liable for their crimes. “It’s political power and when you grab it,” Carranza said. “The national justice processes are arguably more important than the proceedings in the ICC.” INQ