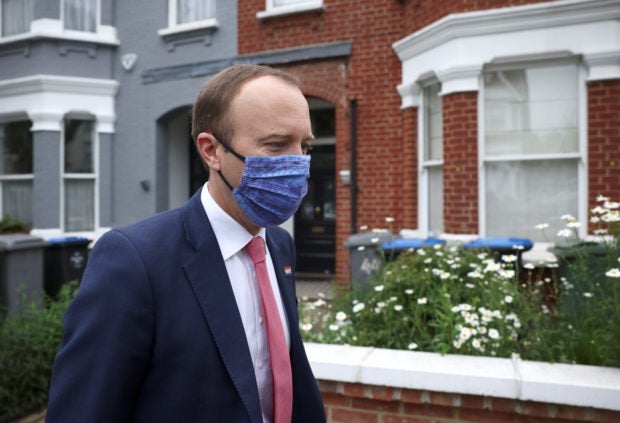 LONDON — British Prime Minister Boris Johnson rejected calls on Friday to fire his health secretary, after pictures appeared of him embracing and kissing an aide in his office, in what he acknowledged was a breach of coronavirus rules.

The Sun newspaper, which published the photographs of Matt Hancock and the aide on its front page, said the images were taken last month, before the government lifted rules banning intimate contact with people outside a person’s household.

The aide had been a friend of Hancock’s before she was appointed to his staff. Hancock is married.

“I accept that I breached the social distancing guidance in these circumstances,” Hancock said. “I have let people down and am very sorry. I remain focused on working to get the country out of this pandemic, and would be grateful for privacy for my family on this personal matter.”

Hancock, 42, has been at the center of the government’s fight against the pandemic, often appearing on television to tell the public to follow strict rules and to defend his department against criticism of its response to the crisis.

A spokesperson for Johnson said the prime minister had accepted Hancock’s apology, had full confidence in him, and “considers the matter closed”.

The opposition Labour Party called on Johnson to fire Hancock and demanded an investigation into whether he breached the code governing the behaviour of ministers.

“This matter is definitely not closed, despite the government’s attempts to cover it up,” a Labor spokesperson said. “Matt Hancock appears to have been caught breaking the laws he created, while having a secret relationship with an aide he appointed to a taxpayer-funded job.”

Hancock has been criticized for his department’s handling of the pandemic, particularly in the early months last year when it struggled to deliver testing and protective equipment for hospital staff treating COVID-19 patients.

Hancock was found in February to have acted unlawfully by not revealing details of contracts signed during the crisis. The health ministry said it had needed to move quickly.

Hancock also said last year that it was right that a government scientist resigned after breaking COVID rules by meeting a partner.

More than half of UK adults said Hancock should resign, according to an opinion poll on Friday. Savanta ComRes found 58% of those polled thought he step down.

“It’s a disgrace,” said Charlie Irwin, a 19-year-old who lives in Kent in the south of England. The government has been “so onto us about, you know, ‘you can’t do this, you can’t do that,’ and then to go and break them.”

The Sun did not say how it obtained the security camera images, but it cited a whistleblower as commenting on the relationship. London’s police said they would not investigate Hancock because they do not retrospectively investigate breaches of the government’s coronavirus regulations.

The Sun said Hancock met the aide at Oxford University in the early 2000s. She is listed on the health department’s website as a non-executive director.

Asked about the appropriateness of appointing friends to positions in government, Transport Minister Grant Shapps told Sky News that “very strict rules” were in place.