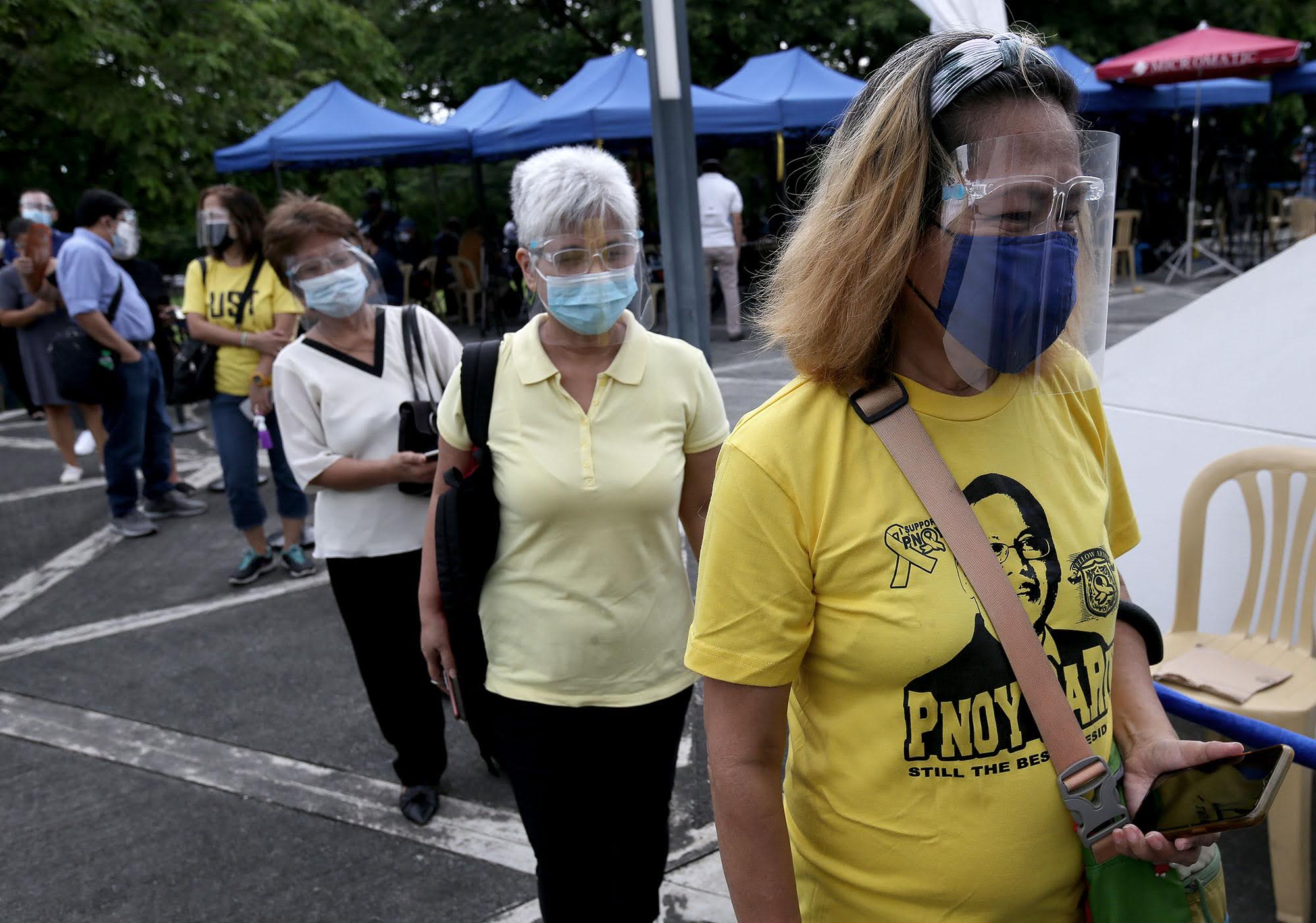 COLOR OF PROTEST Supporters of the late President Benigno Aquino III and his family—sweepingly mocked by pro-Duterte administration groups as “dilawan”—showup proudly wearing their color on Friday at Ateneo de Manila University campus to pay their last respects to the departed. —RICHARD A. REYES/ GRIG C. MONTEGRANDE

MANILA, Philippines — Mourners lined up on Friday at the gate of Ateneo de Manila University as early as 6 a.m. for the public viewing of the urn containing the ashes of former President Benigno “Noynoy” Aquino III.

Applause marked the urn’s arrival at the Church of the Gesù. Honor guards received it at the church steps at 9.30 a.m. and deposited it near the altar.

Five years ago to the day, Aquino visited his alma mater for his final address as President.

In military camps, the Armed Forces of the Philippines rendered the traditional gun salute for its fallen former Commander in Chief.

Thereafter, a volley was fired every half hour until 5 p.m., the eight rounds representing the eight Tagalog provinces that rose against Spanish colonial rule in the 19th century.

The military custom was carried over from the battlefield, when soldiers would temporarily cease fighting to tend to the dead. The volleys signaled that the burial party was ready to resume battle.

The remains of Aquino, who died due to renal disease secondary to diabetes on Thursday at 61, were brought to Ateneo for a final homecoming before his scheduled interment today at Manila Memorial Park in Parañaque City.

Ateneo president Fr. Bobby Yap welcomed the school’s “illustrious son,” who received his elementary, secondary and tertiary education there and graduated with a degree in economics in 1981.

Many of the mourners wore yellow, the protest color long associated with the Aquino family.

Maureen Borja, 45, was first to queue at Ateneo’s gate at 6 a.m. She and 15 others traveled all the way from Camarines Sur in Bicol to pay their respects.

Laureles expressed shock that Aquino had died at a relatively young age, but said he fulfilled his duties and was able to serve the country.

Past and incumbent officials

Local police and marshals were deployed to enforce health protocols.Aquino’s Cabinet Secretary Rene Almendras told the Inquirer that initially there was no plan for a public viewing given the pandemic, “but the family decided [to] push through” with it.

Later in the day, Kris Aquino, the former President’s youngest sister, thanked those who had come, saying: “We know how difficult it is to come here.”

Among the mourners were Aquino’s friends and allies, such as Mar Roxas, his running mate in the 2010 election, and former Sen. Antonio Trillanes IV.

Liberal Party (LP) president and Sen. Francis Pangilinan recalled how Aquino was “very selfless” until his final months, choosing not to talk about his failing health so his friends would not worry.

It was also how Kim Henares, former chief of the Bureau of Internal Revenue, remembered Aquino: Initially he did not want to undergo a kidney transplant as “he felt he was depriving another person” of a kidney.

Pangilinan likewise recalled that during the funeral procession of his mother, former President Cory Aquino, in 2009, then Senator Aquino got off his vehicle and joined the walking crowd.

Said Pangilinan: “It was raining and he marched with the people. That was when they embraced him and prodded him to run for President.

“But why did he really step out [of the car]? He was looking for a place to smoke! I told him that may be the only instance that smoking became good for his health.” Asked how Aquino’s death would affect the political landscape, Pangilinan said: “We don’t know. We just have to take it one step at a time. Right now we are mourning.”

At 10 a.m. Friday, all troops in military camps, stations and bases assembled for the official reading of the notice of death of the former President.

Flags in military camps are to fly at half-staff for 30 days, per the military manual.

Flags in government offices will also be at half-staff during the 10-day period of mourning ordered by President Duterte for his predecessor.

“With wisdom and prudence, President Aquino steadfastly steered our country toward economic stability and through the many disasters and challenges that we faced during his term as our leader,” Sobejana said.

As President, Aquino advocated the strengthening of defense and security capabilities. Republic Act No. 10349 was enacted under his presidency to revitalize the slow-paced AFP modernization program.

The AFP also noted that the Aquino-period “Oplan Bayanihan,” or the Philippine Internal Peace and Security Plan, “encouraged us to adopt an inclusive approach toward security, where every Filipino is a stakeholder in the quest to achieve just and lasting peace. It opened up space for people’s participation in making our country and our future safer and more peaceful.” 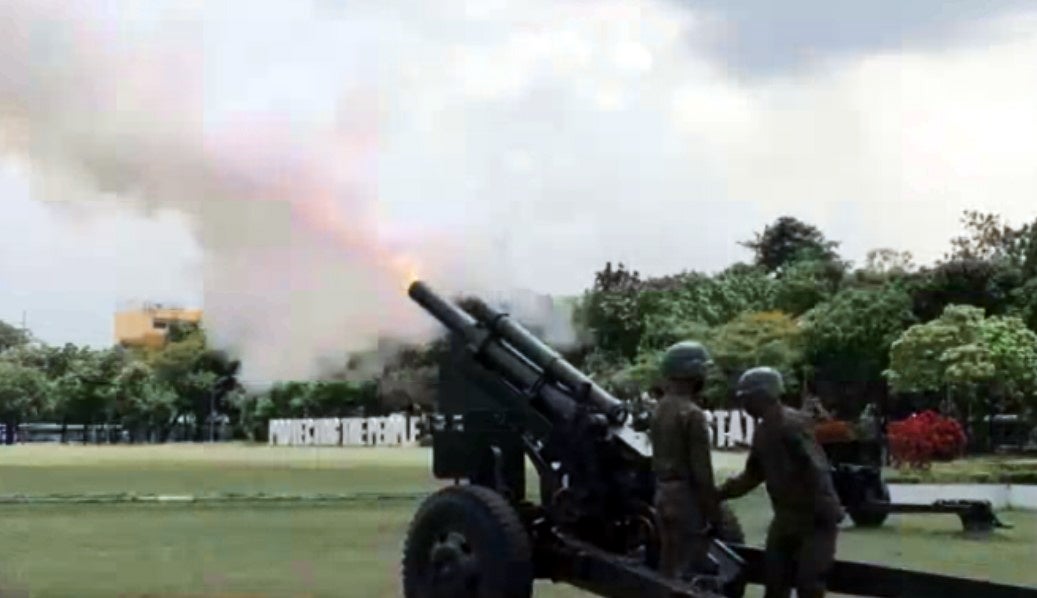 But Oplan Bayanihan was scrapped by President Duterte in December 2016 in support of the peace talks with communist and Moro rebels. It was replaced in January 2017 with Development Support and Security Plan Kapayapaan.

On Thursday, AFP spokesperson Maj. Gen. Edgard Arevalo told CNN Philippines that full military honors would be extended for Aquino, but some changes have to be made in view of the pandemic.

Three 21-gun salutes are to be rendered today in all military camps in time for Aquino’s interment.

Arevalo said soldiers would be deployed to line the roads to provide the honors at the funeral.A funeral Mass to be presided over by Archbishop Socrates Villegas is scheduled at 10 a.m. at the Church of the Gesu.

The funeral cortege is to depart immediately after the Mass and proceed to Manila Memorial Park via C-5 Road to South Luzon Expressway leading to Parañaque.

At the House of Representatives, LP members sought to honor Aquino, a former congressman representing Tarlac, and express the chamber’s sympathies at his passing.

If adopted, a copy of the House resolution will be furnished the Aquino family. —With a report from DJ Yap