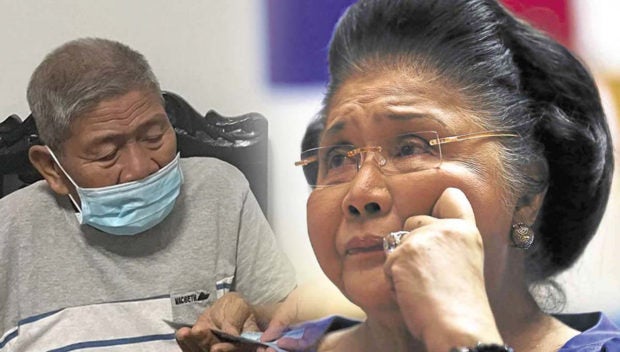 This is a combination photo of Leonardo “Lolo Narding” Flores (left), 80, a resident of Asingan town in Pangasinan who was jailed after being accused of stealing mangoes from a neighbor’s tree, and former first lady Imelda Marcos (right), wife of the late dictator Ferdinand Marcos, who was found guilty of seven counts of graft and was sentenced to imprisonment of six to 11 years for each count in 2018, but has remained free. INQUIRER FILES

MANILA, Philippines — Former first lady Imelda Marcos, wife of the late dictator Ferdinand Marcos, is trending on Twitter Thursday after an octogenarian from Pangasinan was jailed for allegedly stealing 10 kilos of mangoes.

Netizens were quick to compare 92-year-old Imelda with the situation of Leonardo Flores or “Lolo Narding,” an 80-year-old resident of Asingan town in Pangasinan who was under police custody since January 13 after being accused of stealing mangoes from a neighbor’s tree. Flores was only temporarily released Thursday after financial assistance poured in to pay for his bail amounting to P6,000.

READ: Help pours in for octogenarian jailed for ‘stealing’ mangoes in Pangasinan

Netizens also called attention to how the Marcos family’s matriarch remained free despite a conviction in 2018 for seven counts of graft, even asserting that the country’s justice system appears to only favor the rich.

“Imelda Marcos was convicted guilty of 7 counts of graft in 2018 but has never seen a day in jail. She was sentenced to a minimum of 42 years in prison but was deemed ‘too old’ to keep behind bars. Get lost with your selective justice. This is not fair at all,” a Twitter user lamented.

“[W]hat a compassionate act for an elderly who clearly thought those were his mangos! If they can put him in jail regardless of his age on charges of stealing 10 kilos of mangoes, why can’t they [jail] an already convicted Imelda Marcos who stole billions?” another Twitter user pointed out.

“But Imelda who is convicted is still not in jail? We clearly need a new leader that is not an anti-poor,” a Twitter user likewise declared.

In 2018, the Sandiganbayan’s fifth division found Imelda guilty of seven counts of graft and was sentenced to imprisonment of six to 11 years for each count.

The charges against the former first lady were in connection to her violation of Republic Act No. 3019 or the Anti-Graft and Corrupt Practices Act when she diverted over $200 million in public funds to seven private Swiss foundations during her term as Metro Manila governor, assemblywoman, and minister of human settlements during her husband’s rule.

Despite the warrant issued by Sandiganbayan, Imelda was not arrested.

Former Philippine National Police chief and retired police Gen. Oscar Albayalde said then that they did not arrest Imelda as he considered her age and health. She was 89 years old at the time.

This was not the first time that social media users compared Imelda with another elderly who violated the law.

In 2020, social media users clamored for the release of 72-year-old Elmer Cordero, a jeepney driver who was detained for protesting their loss of livelihood amid the lockdowns imposed due to the COVID-19 pandemic which stopped the operation of public utility vehicles.

INQUIRER.net has sought a comment from the Marcos camp about this matter but has yet to receive a response as of posting time.