6 hurt, 3 of them children, in Cotabato passenger bus bombing 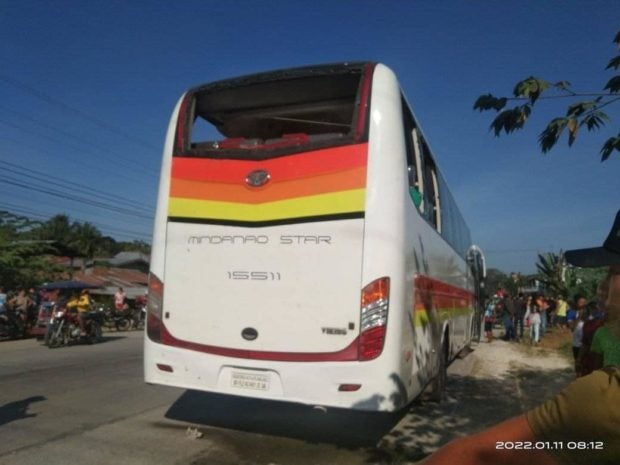 ALEOSAN, Cotabato — At least six persons, three of them children, were injured when an improvised bomb went off inside a traveling Mindanao Star Bus in Barangay San Mateo here at 8 a.m. on Tuesday.

Alex Sandig, 40, one of the passengers, said the explosion was so powerful that it almost turned the vehicle upside down.

“Parang umalsa ang likuran ng bus pagkatapos ng explosion, wasak ang mga bintana ng bus (It lifted the rear part of the bus after the explosion, all the windows were shattered),” he added.

Passengers said the IED was planted at the rear portion of the bus, which had a body number 15511.

Four of the wounded passengers were rushed to various hospitals in Midsayap, Cotabato province. Three of the six injured were minors, according to the Aleosan police.

No one has claimed responsibility for the attack which came two days after the police imposed stricter checkpoint operations for the implementation of the election gun ban.