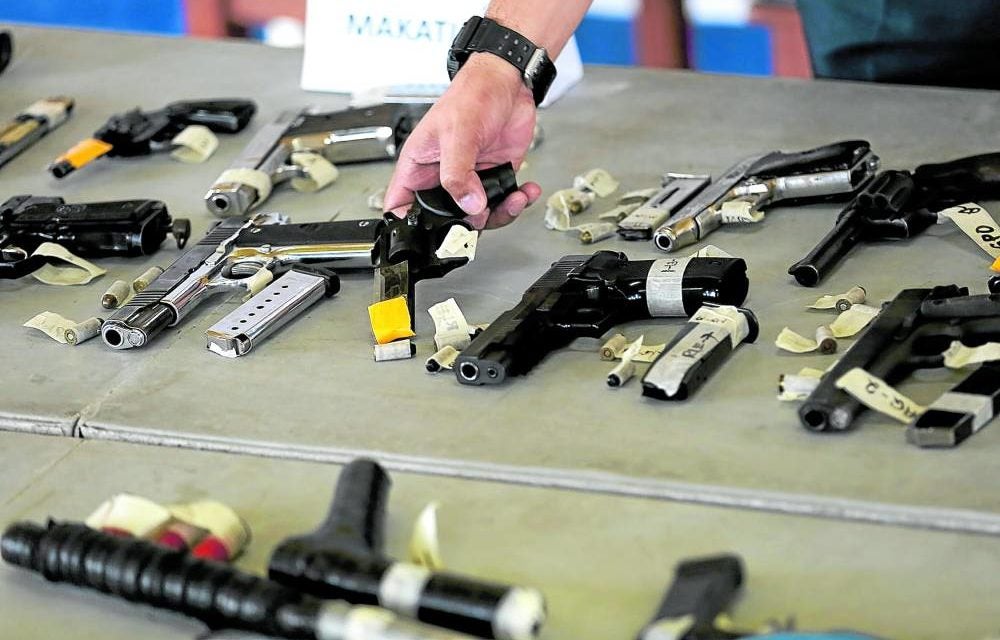 (FILE) AVERTING ELECTION VIOLENCE This photo taken during the election period in 2019 shows several firearms seized during police operations and checkpoint inspections by the Southern Police District in Metro Manila. —RICHARD A. REYES

The gun ban which is being imposed by the Commission on Elections (Comelec) in relation to the upcoming elections, ends on June 8, 2022.

In a statement, the PNP said authorities in Western Mindanao posted the earliest reports of gun ban violations.

At 12:50 a.m., along the National Highway in Barangay Poblacion, Imelda, Zamboanga Sibugay, a suspect identified as Wendell Datoy, 39, was arrested for possession of a .45 caliber pistol, without any documentation of authority to possess the firearm.

Hours later at 4:15 a.m. in Barangay Sanito, Ipil, Zamboanga Sibugay, two men in a motorcycle were intercepted by the PNP-Comelec. A replica .45 caliber pistol was confiscated from the two suspects aged 18 and 17, police said.

Meanwhile, two separate cases of gun ban violations were also reported by the National Capital Region Police Office. A .38 caliber revolver was seized from Jerwin Gubaton, 39, a tricycle driver who was stopped by police for not wearing a face mask.

Gubaton was then arrested for violation of Republic Act 10591 and the Omnibus Election Code.

Also arrested in a separate checkpoint at 2:20 a.m. along Rotonda, Amparo Subdivision, Brgy. 179, Caloocan City was John Paul Dunlao, 23, who was first stopped for not wearing a crash helmet. While reaching for his motorcycle’s registration papers from his bag, police officers spotted a .38 caliber revolver with four live bullets inside the bag.

“These early results of our strict implementation of Comelec Resolution No. 10728 more or less describe the overall aggressiveness of police operations against violators of election law,” PNP chief PGen. Dionardo Carlos said.