Comelec checkpoints, gun ban to start on January 9 ’til end of election period 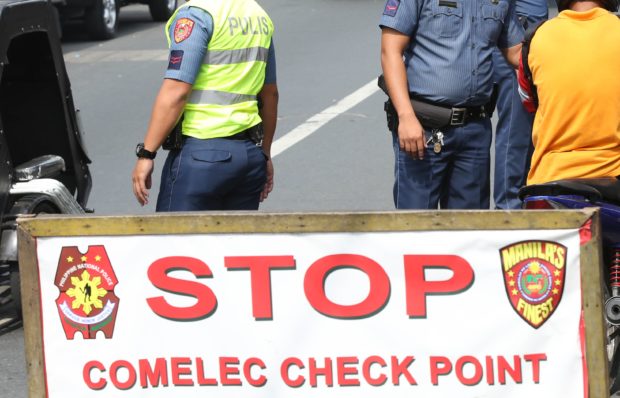 MANILA, Philippines — The Commission on Elections (Comelec) will put up checkpoints during the election period to enforce the gun ban to ensure the peace and order in the conduct of the 2022 polls.

The Comelec, through Resolution 10741, set the guidelines for the conduct of checkpoints nationwide during the election period, which will start on January 9 up to June 8, 2022, or well after the elections.

“To effectively implement the Firearms ban during the Election Period, it is necessary to establish a Commission on Elections checkpoint,” the resolution read.

There should be at least one Comelec checkpoint in each city and municipality, according to the guidelines. The checkpoint will be manned by military or police personnel.

Only visual search is required on the checkpoint, and the public is not required to open their glove compartment, trunk and bags. The manning personnel could not compel anyone to besubjected to a physical or body search “in the absence of any reasonable ground to believe that a person has just committed, is about to commit, or is committing a crime.”

Those who will violate the gun ban will be arrested by authorities.

Regular officers, members and agents of the several agencies will be allowed to carry firearms during the election period. The full list could be accessed here: