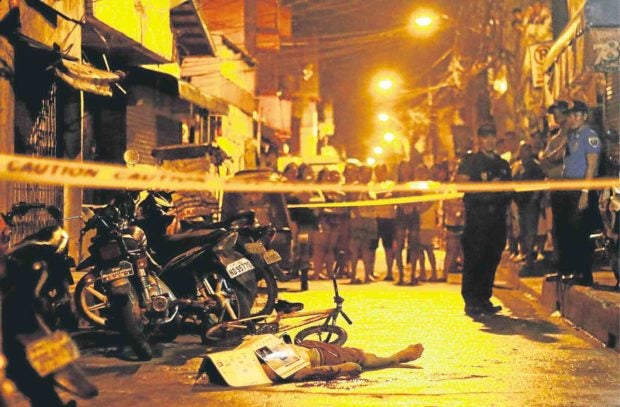 In this 2017 photo, police officers stand guard over the body of another drug suspect shot dead by gunmen on a motorcycle in Pasig City. Thousands were believed to have been summarily killed in the drug war since President Rodrigo Duterte took office in 2016. (File photo from Philippine Daily Inquirer)

MANILA, Philippines — Labor leader Leody de Guzman, who is running for president in the May elections, criticized President Rodrigo Duterte on Wednesday for refusing to show remorse for the thousands of people killed during his administration’s bloody war on drugs.

The issues of corruption and illegal drugs were what installed Duterte in the presidency — the reason why he could not let them go even though he clearly failed to eradicate these two plagues, De Guzman said.

“Instead of humbling himself in the twilight of his miserable term, he has not asked for forgiveness for the thousands killed in his anti-poor war on drugs and for the billions of pesos that were lost every year to corruption,” De Guzman said in a Twitter post in Filipino.

De Guzman issued this statement after Duterte reiterated during his taped weekly briefing on Tuesday night that he would never apologize for the deaths caused by his drug war.

According to De Guzman, however, only the worsening corruption and drug problems are Duterte’s legacy to the next generation of Filipinos.

The labor leader said Duterte’s move was a tactic so that he would not appear as a “lame duck” president.

“Even as his popularity fades, these issues will be used to prevent him from becoming a lame duck,” De Guzman said.

“This is not just to maintain his tough image but to give himself leverage over the candidates seeking his endorsement and even over the next administration,” he added.

As of December 2021, some 6,000 drug suspects had been killed in the war on drugs since Duterte took office, according to the Philippine Drug Enforcement Agency.

A University of the Philippines (UP) study on July 23, even estimated that the drug war has killed an average of two people each day.

Duterte says he will never apologize for drug war fatalities

‘If I go to prison, I go to Muntinlupa,’ Duterte says of ICC probe