Unicef on kids after Odette: ‘We can’t leave them behind’ | Inquirer News

Unicef on kids after Odette: ‘We can’t leave them behind’ 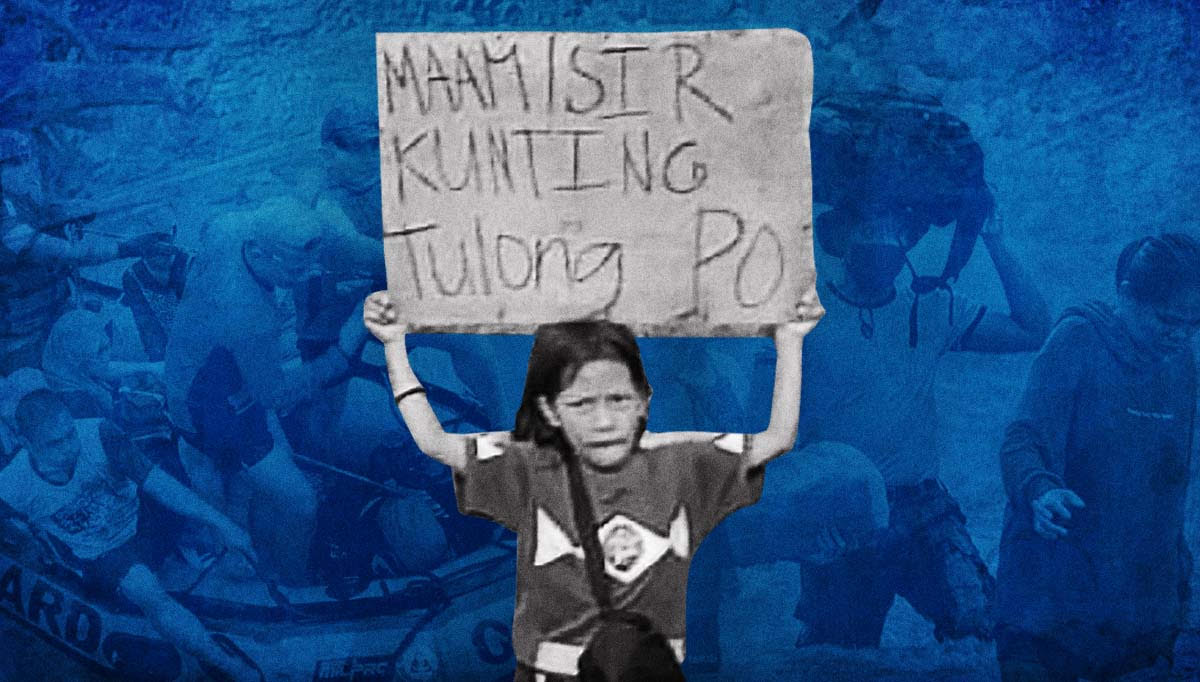 MANILA, Philippines—As Super Typhoon Odette (Rai) displaced millions of people in the Visayas and Mindanao, a United Nations office expressed hope children directly affected would get the help they needed, saying “we can’t leave them behind.”

Oyunsaikhan Dendevnorov, representative of the United Nations Children’s Fund (Unicef), said on Dec. 31, “Let’s reimagine a better future for all our children as we welcome 2022.”

This, as Unicef said 846,000 children in provinces that were severely hit by the typhoon on Dec. 16 and 17–Surigao del Norte, Dinagat Islands, Southern Leyte, Bohol, Cebu, Negros Oriental, and Palawan–needed urgent help.

The United Nations Office for the Coordination of Humanitarian Affairs (UN-OCHA) said the typhoon, which made nine landfalls, was the strongest to hit Mindanao in 10 years. It was also the Philippines’ strongest in 2021. 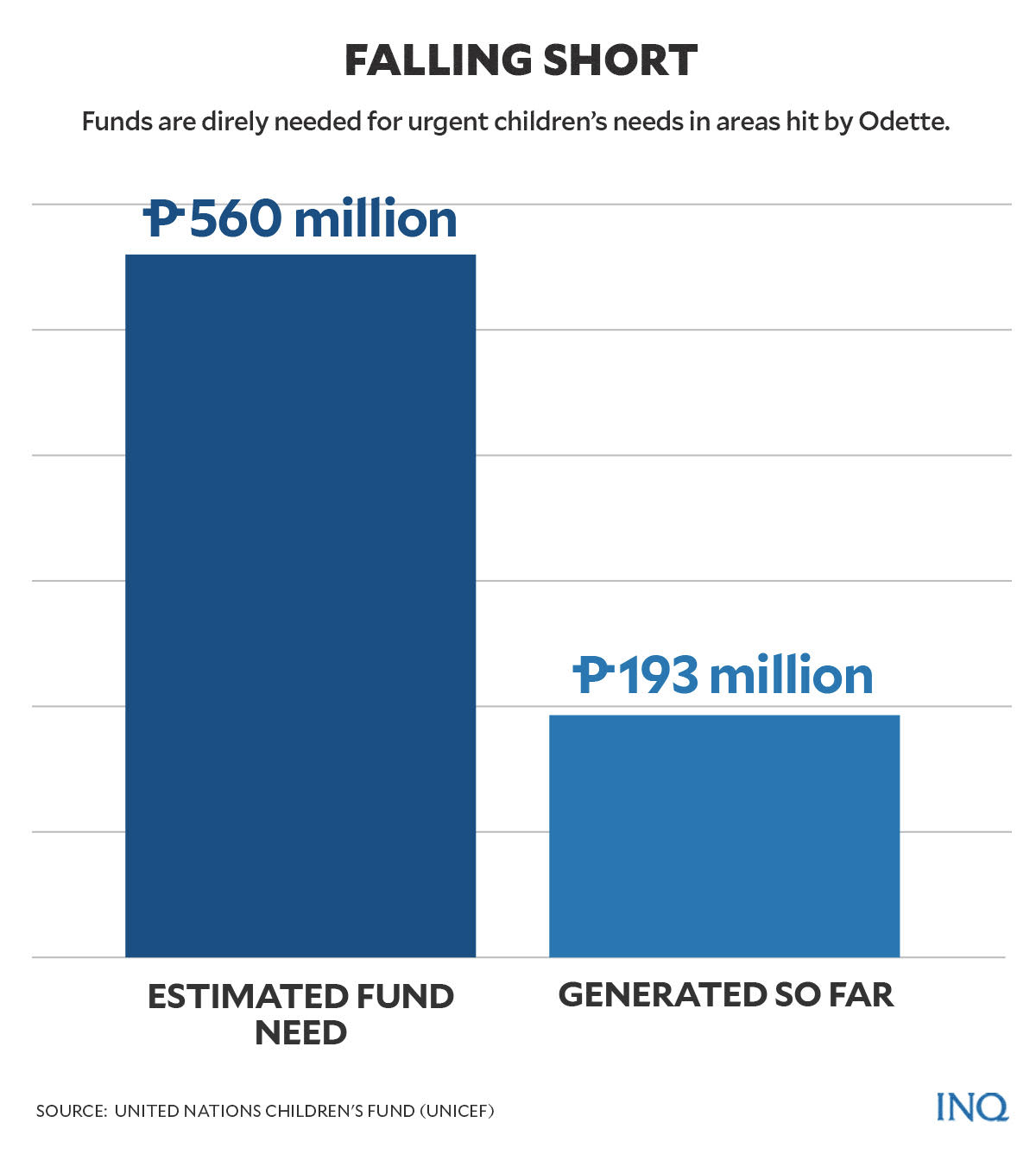 This was the reason Unicef was working to raise at least P560 million to reach 200,000 of the most affected children with essential interventions required to save lives, protect and secure their rights.

Unicef made the appeal for funds on Dec. 24, saying as of Dec. 31 it was able to raise only more than P100 million out of what was needed.

“Without this funding, we will miss out on this critical period to respond to children’s needs,” Dendevnorov said, explaining that some provinces already had worrying rates of starvation even before the typhoon hit. 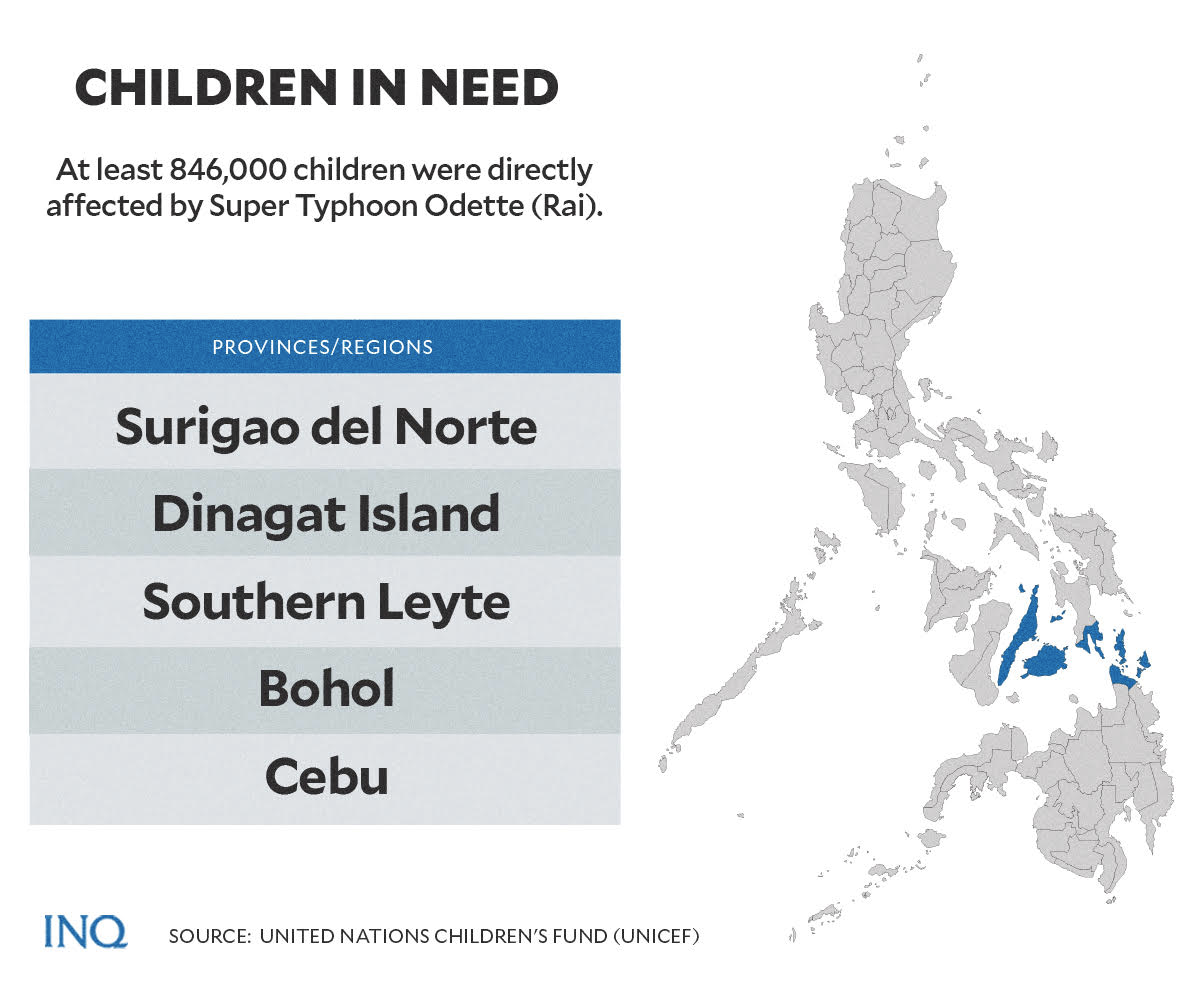 The 2018 Fill the Nutrient Gap Report showed that 49 percent of households in Eastern Visayas and 53 percent in Caraga Region are unable to afford nutritious diets due to economic difficulty and physical inaccessibility.

Prevalence of stunting among children below five years old remains to be of high public health significance in Eastern Visayas (42 percent) and Caraga Region (36 percent). Apart from children, pregnant and lactating women, and the elderly are also at high risk of malnutrition.

On Dec. 16, as Odette was expected to make landfall over Surigao del Norte or Eastern Visayas, Unicef said 16 million Filipinos will likely experience the typhoon’s rage–700,000 of whom were children.

Since then, Unicef has expressed concern, saying that children are the most exposed to peril when crises happen. It said as the threats of COVID-19 still looms, the typhoon places children at additional risks that could upend their lives. 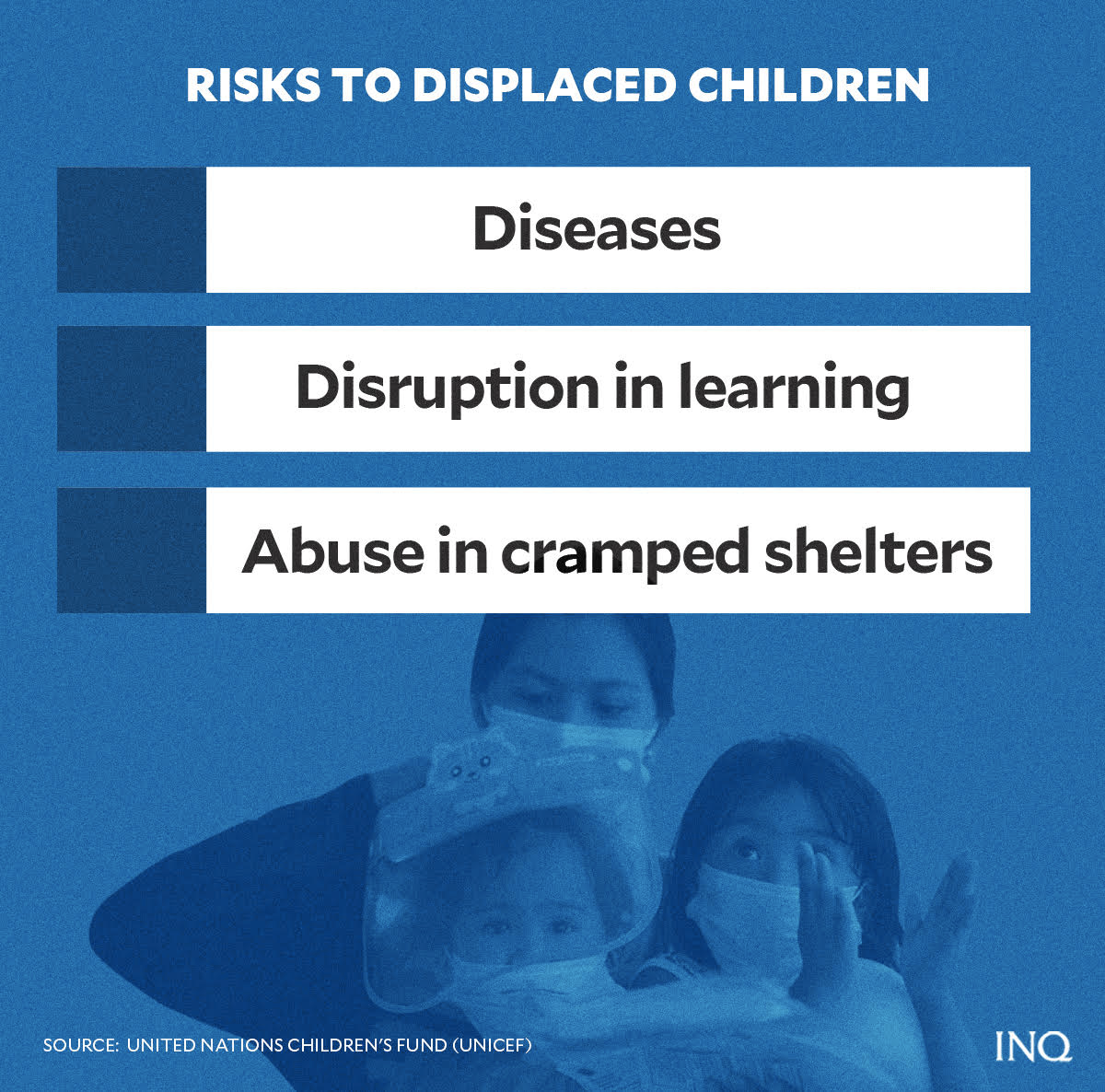 While these statistics were already concerning, Unicef said there’s a children’s crisis that “we need to end now”.

Unicef said assessment teams saw children with diarrhea in homes and hospitals while their worried parents were barely recovering from the shock of losing their homes and livelihoods.

“Children’s schools were partially or completely destroyed and their learning modules have been inundated,” it said in a report.

In Caraga Region, specifically in Dinagat Islands and Surigao del Norte, UN-OCHA said 135,451 learners in 835 schools were affected by the typhoon.

The Global Protection Cluster of the Gender-Based Violence (GBV) Prevention and Response said displacement intensifies GBV-related risk in every crisis context so it was concerned that the regions most affected by Super Typhoon Yolanda (Haiyan) in 2013 had higher rates of physical and sexual violence.

It was explained by Unicef that children needed help since local government officials are overwhelmed and child rights’ workers—like teachers and social workers—are themselves hit by the typhoon.

As UN-OCHA said the “needs are tremendous,” it prepared a plan based on the Humanitarian Needs and Priorities. However, the plan will still be revised in a few weeks to reflect the needs based on additional assessments.

Here’s a breakdown of the needs of children based on the UN-OCHA document:

RELATED STORY: PH’s typhoon alley and the trail of destruction it brings