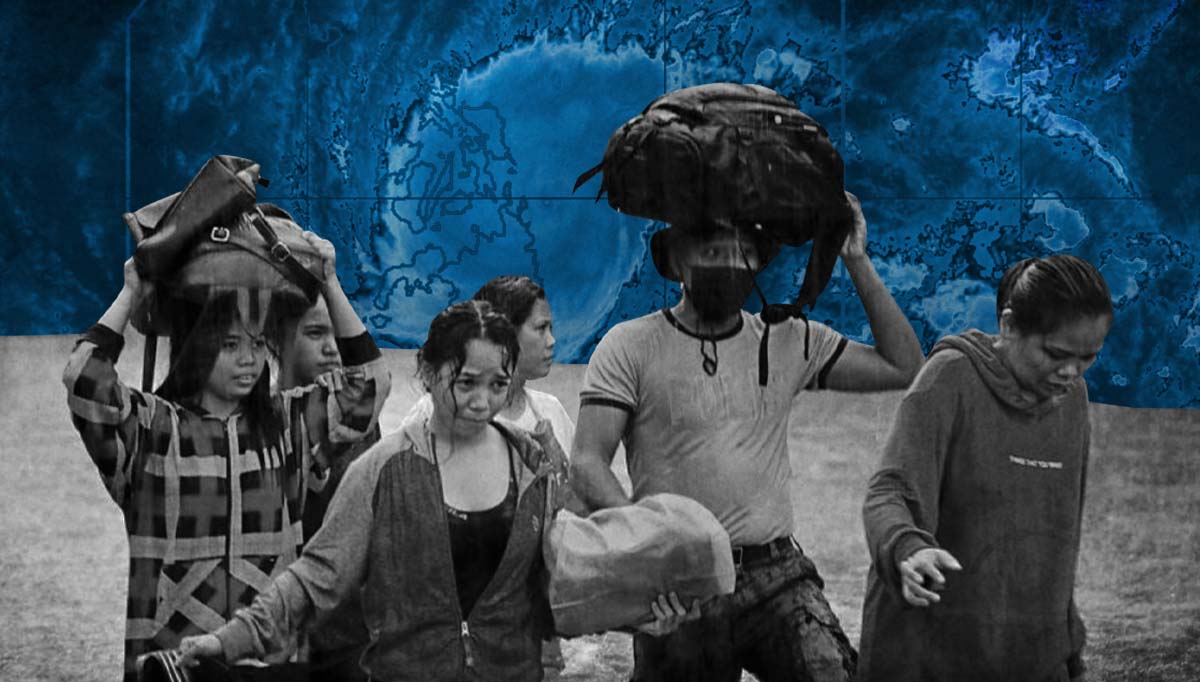 MANILA, Philippines—Typhoon Odette (international name: Rai) pummeled parts of Mindanao and the Visayas on Thursday (Dec. 16) with its path cutting across six regions where at least 3.8 million people, based on estimates made by a United Nations agency, live below the poverty line.

The number of people below the poverty line and whose lives were expected to be further hammered by the 15th typhoon to enter the Philippine area of responsibility (PAR) was estimated by the UN Office for Coordination of Humanitarian Affairs (UN-OCHA) which monitored the impact of Odette on the poor in the Philippines.

Odette, according to UN-OCHA, had been on track in having a direct impact on at least 16 million people in the six regions on its path.

Initial information and data from the Philippines’ National Disaster Risk Reduction and Management Council (NDRRMC) were inconclusive about whether the UN-OCHA projection came to reality.

But early information and numbers provided by the disaster-mitigating agency showed Odette’s impact to be massive and widespread.

According to data from the NDRRMC. as of Dec. 17, one person had died while two others were injured due to Odette. 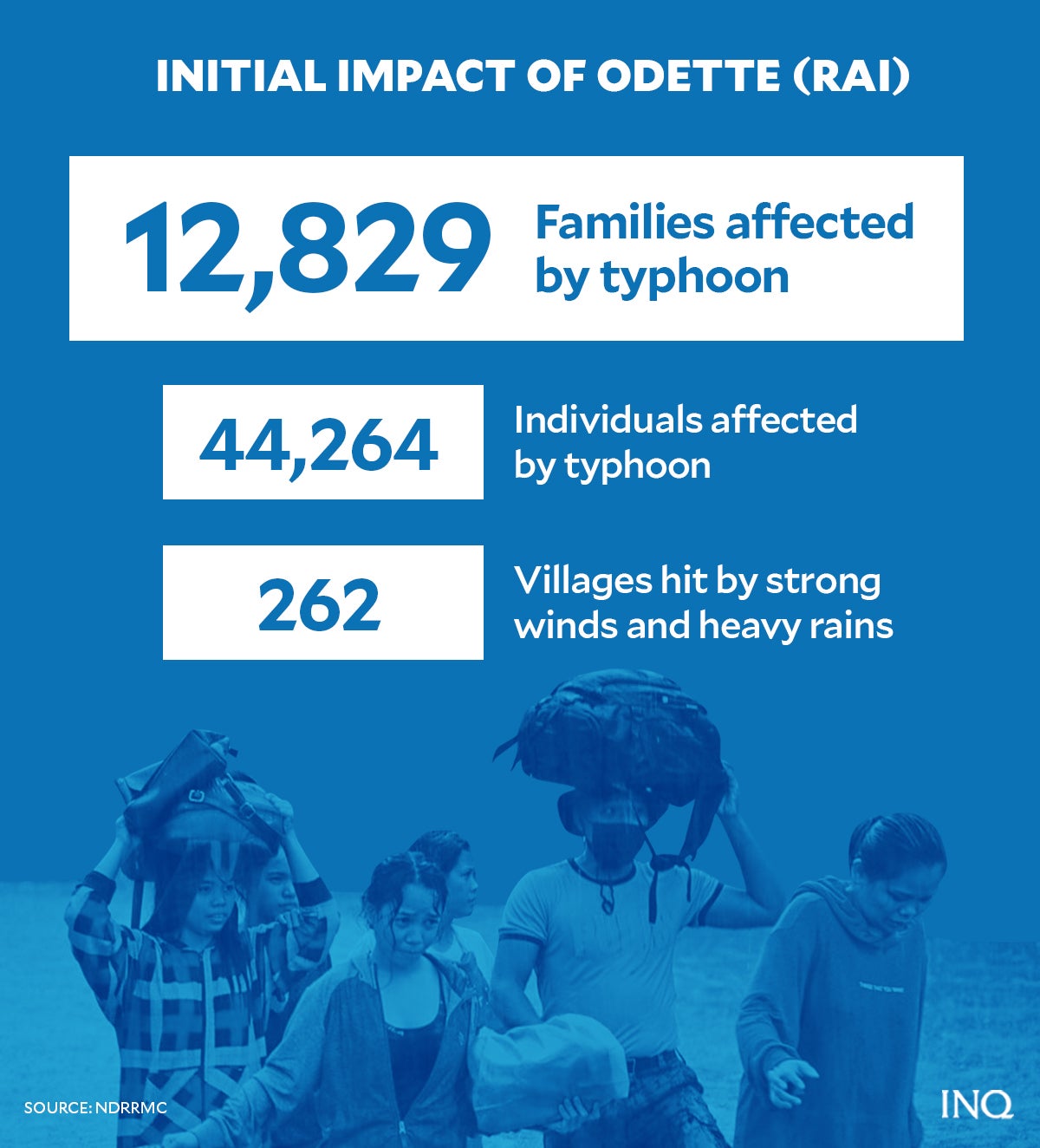 So far, the NDRRMC has recorded 12,829 affected families, 44,264 affected persons, and 262 barangays that experienced winds exceeding 200 kilometers per hour and heavy rains brought by Odette. 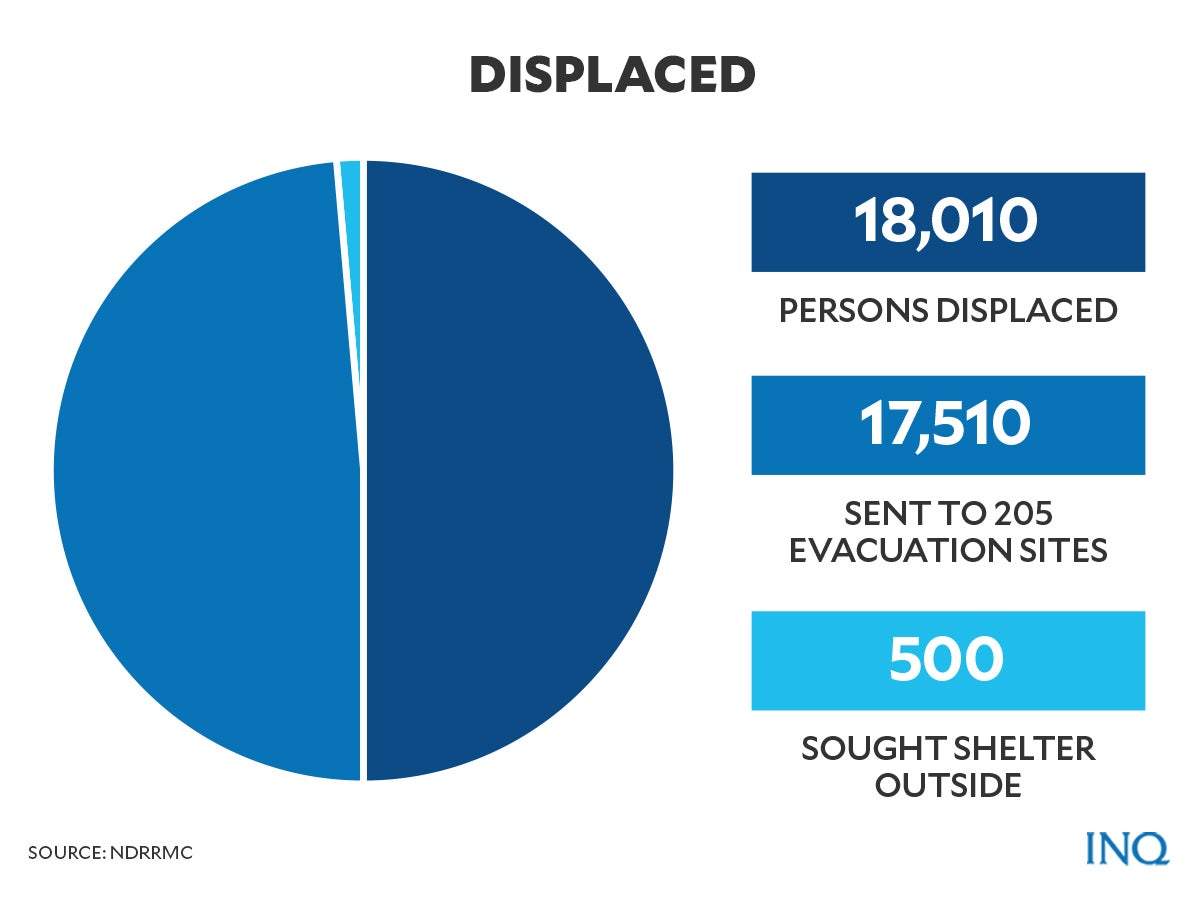 Initial NDRRMC data said 18,010 persons had been displaced with 17,510 of them seeking shelter in 250 evacuation sites while 500 others finding safer ground outside evacuation sites.

On Dec. 14, the NDRRMC had estimated that more than 10,000 villages are on Odette’s path, most of these in the Visayas and Mindanao and parts of Southern Luzon.

As of 12 noon on Oct. 17, the NDRRMC has yet to present data on damage to homes, infrastructure, agriculture and buildings.

But social media was repleted with pictures and videos showing the horrors brought by Odette. In Tagbilaran City, Bohol province, one of the areas directly hit by Odette, photos posted by netizens showed cars, trucks and sea vessels dumped onto shores.

Videos showing the strength of Odette’s winds—which reached 240 kph at one point—causing trees to sway heavily and parts of roofs flying.

There were two areas in the Bangsamoro Autonomous Region of Muslim Mindanao (BARMM), according to NDRRMC, which were flooded by torrential rains brought by Odette.

A rain-induced landslide was also recorded by the agency. However, there were no available details yet as to where the landslide occurred.

Three bridges were hit by flooding, two of which remained passable while one was closed to all types of vehicles. 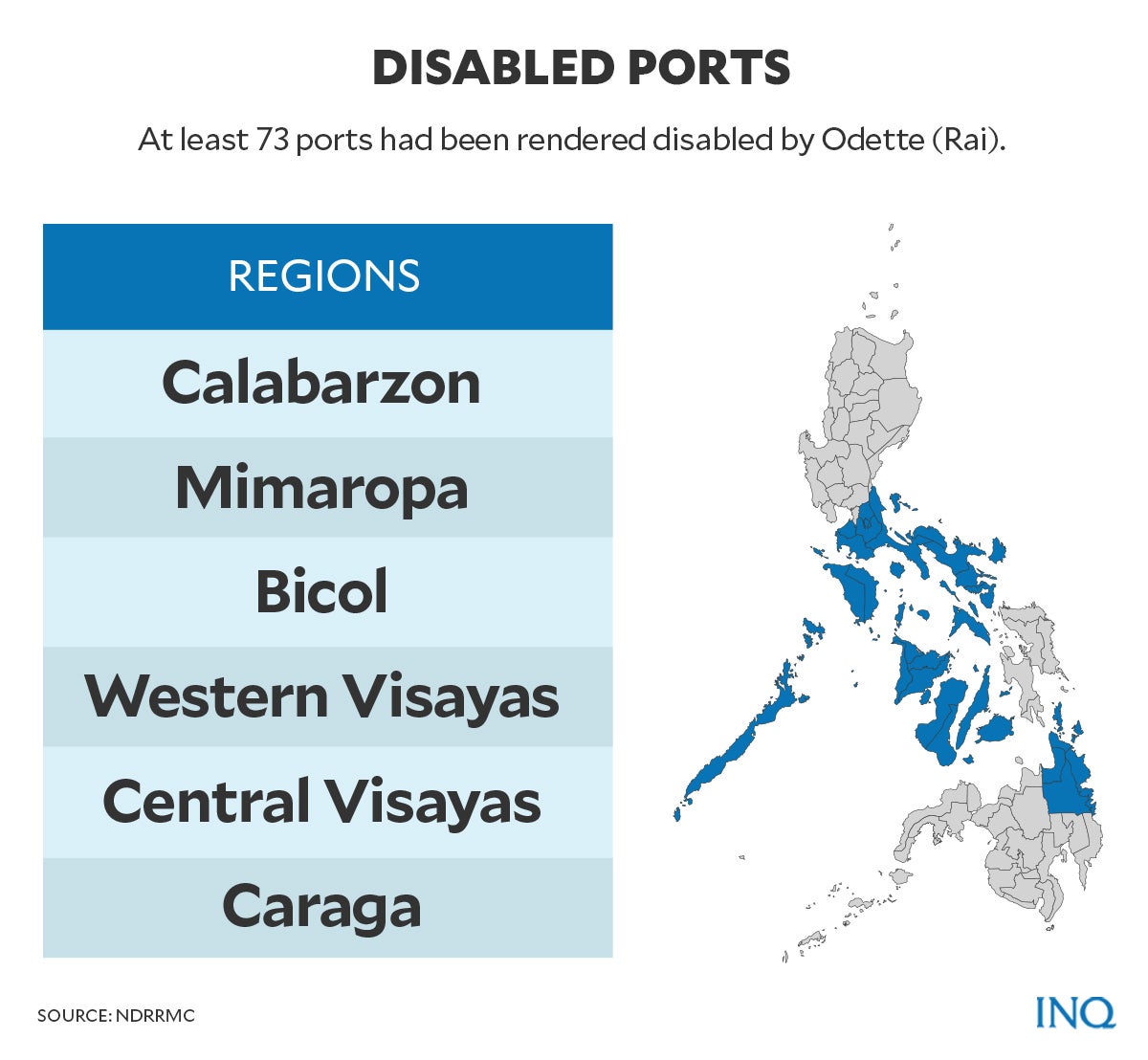 There were a total of 73 ports in the regions of Calabarzon (Cavite, Laguna, Rizal, Quezon), Mimaropa (Occidental and Oriental Mindoro, Marinduque, Romblon, and Palawan), Bicol, Western Visayas, Central Visayas and Caraga that were rendered disabled by Odette. 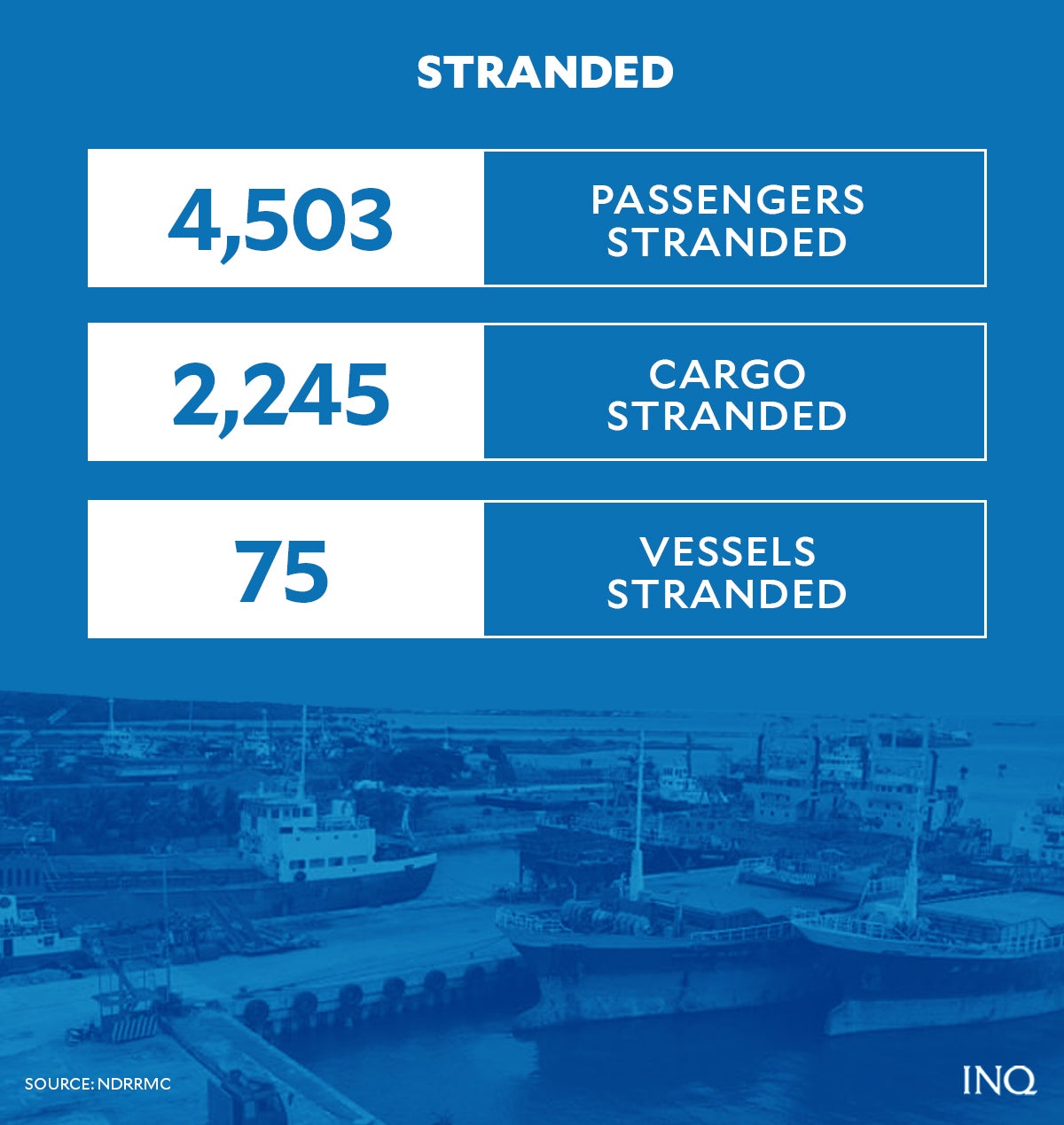 Power was cut off in at least 71 towns and cities in Western Visayas, Central Visayas and Eastern Visayas. NDRRMC said as of past noon on Dec. 17, these areas were still without electricity. 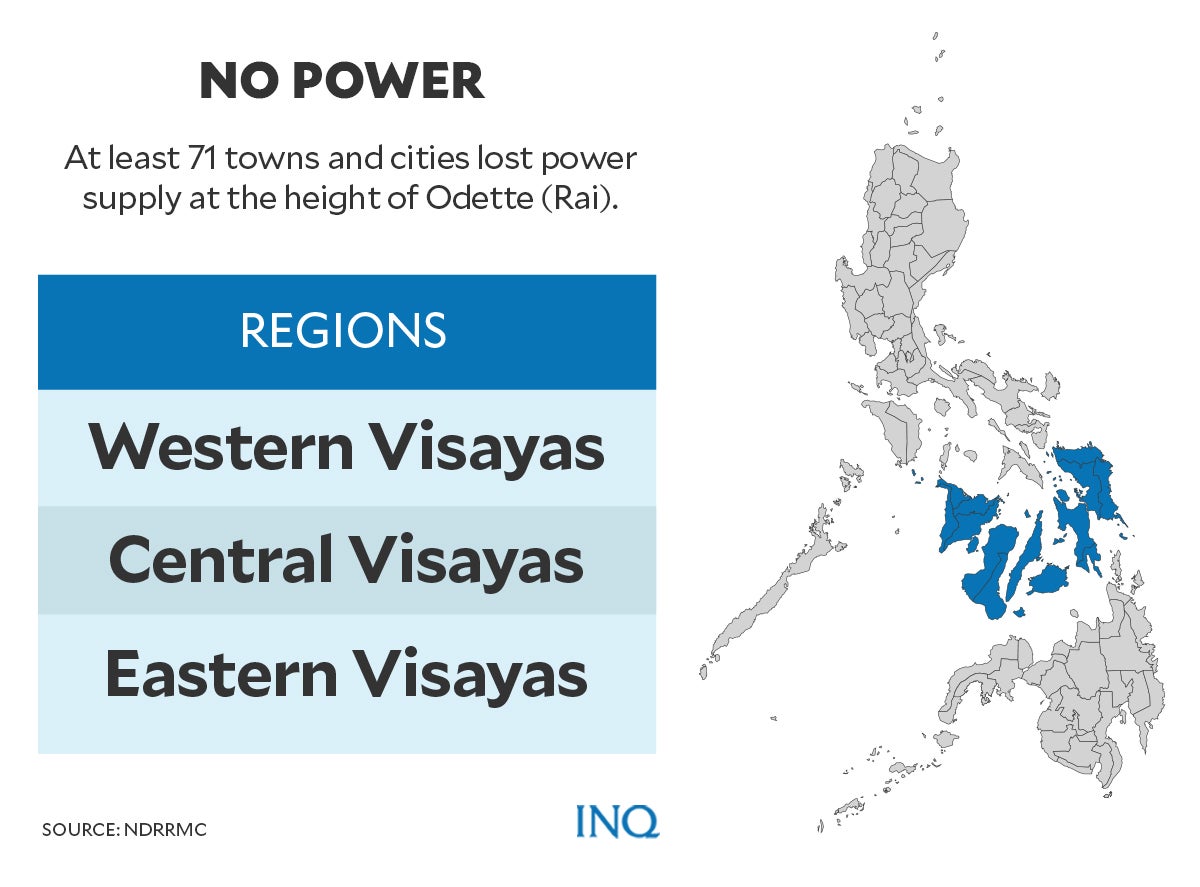 Three cities or towns in Central and Eastern Visayas experienced interruption in telecommunications. Services had been restored in two of the areas as of past noon on Dec. 17.

As of 3 p.m. the NDRRMC has yet to receive reports on water supply damage.

The NDRRMC has not yet updated the estimated cost of assistance provided to those who were impacted by Odette.

The agency, however, earlier listed resources and assets prepositioned for Odette. These were:

Non-food items had been distributed to regions in anticipation of Odette.

The Office of Civil Defense (OCD), in its office in Quezon City, also stored non-food items worth P75 million which it can deploy on the basis of need.

At least 261 cities or municipalities have suspended classes while 239 announced work suspension due to Odette.