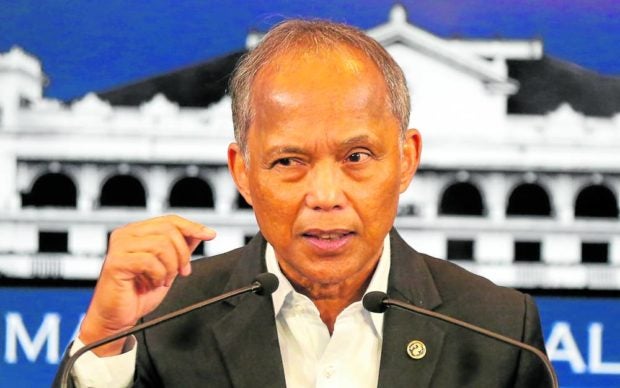 MANILA, Philippines — A petition filed by the ruling Partido Demokratiko Pilipino-Lakas ng Bayan (PDP-Laban) urging the Commission on Elections (Comelec) to reopen the filing of certificates of candidacy (COCs) should go straight to the trash bin, poll watchdog Kontra Daya said on Sunday.

Kontra Daya convener Danilo Arao criticized the move by the faction of the party led by Energy Secretary Alfonso Cusi, saying it was “clearly a mockery of election rules.”

He said Cusi’s request disregards the poll body’s preparations for the May 9 general elections and also “reflects the impunity of the rich and powerful.”

“The petition is so laughable that it should be dismissed immediately. Elections should not be treated as a joke,” Arao told reporters.

“It is a mockery because it ignores the set deadlines and offers no compelling reason for extension,” he added.

Arao, who is also a journalism professor at the University of the Philippines, pointed out that PDP-Laban’s petition was different from the call of Kontra Daya and other groups asking the Comelec to extend the period of voter registration.

“We cannot take seriously any call to reopen COC filing when the deadline has lapsed months ago,” he said.

In a 20-page petition it filed on New Year’s Eve, the Cusi wing claimed that the weeklong period of filing COCs from Oct. 1 to 8 was “unreasonable, unnecessary and legally impossible.”

The petition, however, did not explain why it sought the reopening of the filing of candidacies almost three months after the deadline.

Lawyer Melvin Matibag, PDP-Laban deputy secretary general, said the Comelec should postpone the printing of ballots since there were still pending cases involving national candidates as well as the accreditation of party list groups.

“This petition will benefit everyone and should be intently considered by the (Comelec),” Matibag said.

As the ruling party, PDP-Laban finds itself in the unique situation of having no standard-bearer or even a full senatorial slate for this year’s general elections.

The party has been hounded by internal fighting between the Cusi-led faction allied with President Rodrigo Duterte and the faction supporting presidential aspirant and Sen. Manny Pacquiao.

In May last year, Pacquiao issued a memorandum circular which “strongly advised” party members from participating in a national assembly called by Cusi.

But that month Duterte, according to his spokesperson at that time, Harry Roque, directed Cusi to call such an assembly. The president then was considering the option to run for vice president, which the Cusi faction supported.

Two months later the Pacquiao faction expelled Cusi, Matibag and PDP-Laban executive director Ron Munsayac from the party for “showing allegiance to a political party apart from PDP-Laban.” Cusi in turn held the national assembly that July which ousted Pacquiao as party president and voted Cusi as Pacquiao’s replacement.

In September, Duterte accepted his nomination in the party as vice president, only to file his candidacy as senator two months later under a different party, the Pederalismo ng Dugong Dakilang Samahan (PDDS), before ultimately withdrawing that candidacy.

His aide, Sen. Bong Go, had declined his nomination by PDP-Laban as president and filed his presidential candidacy under the PDDS, only to drop that bid as well.

In October, Pacquiao filed his presidential candidacy under the Promdi party, which made him “automatically expelled” from PDP-Laban, according to the Cusi faction.

Also that month, Sen. Ronald dela Rosa filed his presidential candidacy under the ruling party despite having no role in its selection process, but eventually withdrew his candidacy by November, two days before the deadline for the substitution of candidacies.

The PDP-Laban was formed in 1982 from two parties opposed to the Marcos dictatorship, the Partido Demokratiko Pilipino led by then Cagayan de Oro Mayor Aquilino Pimentel Jr. and the Lakas ng Bayan party of former Sen. Benigno Aquino Jr.

Although the party played a crucial role in the anti-Marcos movement that catapulted Corazon Aquino to power in 1986, it became a minority party in much of the post-Marcos era, until Mr. Duterte ran for president under that party and won in 2016.