Drug war review goes on until Duterte steps down – Guevarra 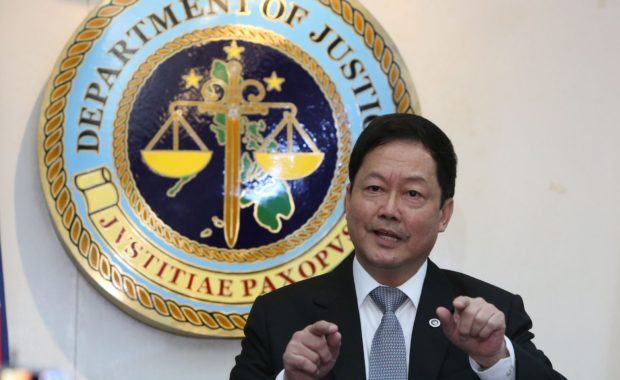 MANILA, Philippines — The Department of Justice (DOJ) will continue its review of President Rodrigo Duterte’s brutal anti-drug campaign until the end of his term.

According to Justice Secretary Menardo Guevarra, the National Bureau of Investigation was already readying its report on 52 “nanlaban” cases in which drug suspects were killed by policemen for supposedly resisting arrest.

“As to the status of the drug war review, the NBI will submit in a few days an initial report on the 52 cases that the DOJ endorsed to the NBI for case buildup,” he said in a Viber message on Sunday.

The justice department’s regional prosecution units were working closely with the Internal Affairs Service of the Philippine National Police in looking at “thousands of other administrative disciplinary cases” against policemen involved in anti-narcotics operations,” he added.

The DOJ will also focus on the implementation of the joint three-year project between the Philippine government and the United Nations to promote respect for human rights, Guevarra said.

Earlier, he told reporters that the DOJ’s scrutiny of Mr. Duterte’s drug war would not end with the possible prosecution of 154 policemen behind the 52 “nanlaban” cases after human rights advocates noted that the figure was just a fraction of the estimated number of victims of the bloody campaign.

Beset with criticisms here and abroad, the president had directed Guevarra to lead the review of his take-no-prisoners strategy against illegal drugs, which he first implemented as Davao City mayor. This approach against criminality had earned him the moniker “The Punisher” for openly advocating the killing of drug suspects.

Detained Sen. Leila de Lima, meanwhile, had some advice for the DOJ after the dismissal of a 2013 case against two men who had linked her to the illegal drug trade.

“It will serve the DOJ well to remember to flex the long arm of the law more often against the real criminals, rather than the strong hand of the state against the political opposition,” she said in a dispatch from Camp Crame on Sunday.

While De Lima had no comment on the merits of the drug case against self-confessed drug lord Rolan “Kerwin” Espinosa, convicted drug trader Peter Co, and two of their alleged cohorts, she noted that the two had tried to link her during congressional inquiries to the illegal drug trade at New Bilibid Prison in Muntinlupa City.

Espinosa and Co, according to her, falsely testified that she was part of shady drug deals inside the penitentiary during her tenure as justice secretary under the Aquino administration.

She added that then Justice Secretary Vitaliano Aguirre II “had to use characters such as Kerwin Espinosa to falsely implicate [me] in the drug trade.”

“That was all they cared for and what mattered to them. They needed them to implicate me. It didn’t matter to them that the charges against them would stick as long as there’s something they could use in their demolition job against me,” De Lima said.

“I can understand the frustration of the current SOJ (secretary of justice) when he remarked that ‘sooner or later, the long arm of the law will catch up with these people and they will answer for their crimes,’” she said, referring to Guevarra.

“I fully concur. But Aguirre’s DOJ should have displayed the same vigor exhibited in running after me in pursuing these cases v. Espinosa, et al.,” the senator said.

“With their misplaced zeal and wrongful prosecution of an innocent target, rule of law and justice suffer. An innocent suffers while the real guilty malefactors benefit therefrom,” De Lima said.

Not off the hook yet

Espinosa and his father, slain Albuera Mayor Rolando Espinosa Sr., were among the first high-profile personalities tagged in Duterte’s war on drugs.

The four were indicted over their alleged involvement in the trafficking of 20 kilos of “shabu” (crystal meth).

The court, however, noted that the prosecution relied heavily on Adorco’s testimony, which turned out to be “not only untrustworthy but also inadmissible” since it was obtained without his lawyer.

Despite this, Guevarra said that Espinosa was “not off the hook yet” since he had pending cases in Manila and Albuera, Leyte. The justice secretary also ordered government prosecutors to file a motion for reconsideration in the Makati court.