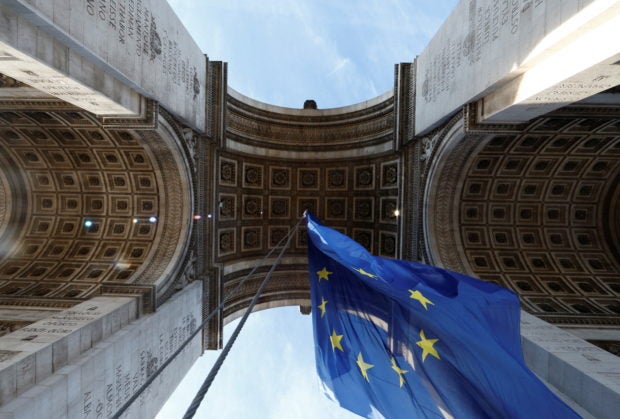 The European flag flies under the Arc de Triomphe to celebrate the start of the French presidency of the European Union, in Paris, France, January 1, 2022. REUTERS

PARIS — Far-right leader Marine Le Pen protested on Saturday against the placing of a European Union flag on the Arc de Triomphe for the start of Paris’ six-month presidency of the bloc.

Le Pen, whom polls show to be President Emmanuel Macron’s main rival for the spring presidential election, was joined by other right-wing politicians in outrage against the EU flag fluttering on the Paris landmark.

“To adorn the Arc de Triomphe with the sole colors of the European Union, without the presence of a national flag, is a real attack on our nation’s identity, because this monument honors our military victories and houses the Tomb of the Unknown Soldier,” she said in a statement.

There was no immediate comment from the pro-EU Macron, whom Le Pen accused of giving a “direct order” to hang the flag.

But Junior European Affairs Minister Clement Beaune said the display was only temporary. “The French flag has not been replaced. The election campaign is not a free pass for petty lies and controversies,” he tweeted.

Macron, who has yet to say if he will run for re-election in April, defeated Le Pen in the 2017 run-off by 66%-34%. All polls show him favorite to win another five-year term.

Le Pen said she would appeal to the Council of State, which acts as legal adviser of the executive, to remove the EU flag.