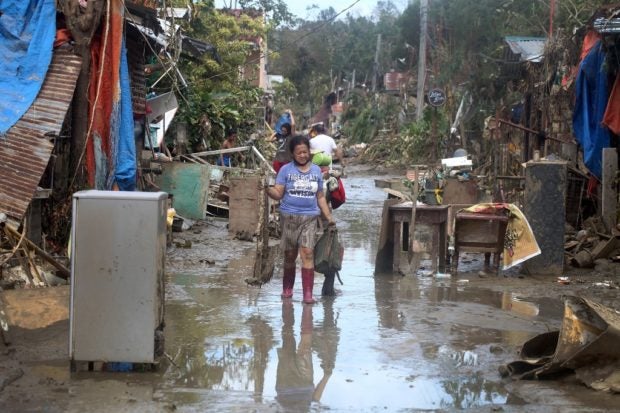 Residents clean their mudded houses caused by floodings due to heavy rains brought about by Typhoon Odette (Super Typhoon Rai) in Loboc town, Bohol province on December 21, 2021, days after the super typhoon devastated the province. (Photo by Cheryl BALDICANTOS / AFP)

TAGBILARAN CITY — The death toll due to Typhoon Odette (International name: Rai) in Bohol has increased to 107.

The provincial government of Bohol reported on Saturday that majority of the fatalities were recorded in Ubay and Talibon towns which have 14 fatalities each.

There were seven fatalities each in Bien Unido and Loon towns, while six deaths were recorded in San Miguel town.

There were also five fatalities each in President Carlos P. Garcia, Inabanga and Catigbian.

There were 12 persons missing and about a hundred were injured.

At least 26,590 families or 61,997 individuals were evacuated during the onslaught of the typhoon in Bohol.