Duterte says no Christmas, New Year for them; to provide cash aid to Odette victims in 3 days 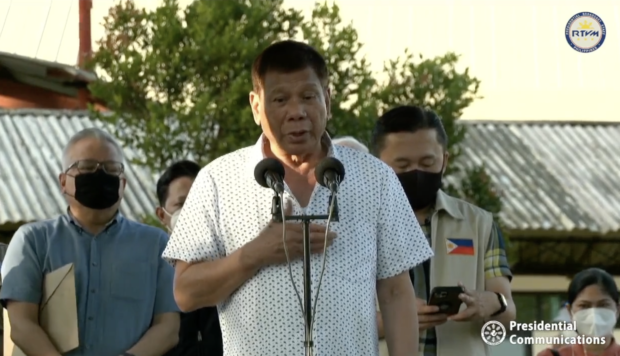 MANILA, Philippines — President Rodrigo Duterte vowed to forego his holidays to provide financial assistance to provinces hit by Typhoon Odette, with a promise that cash grants will arrive in a maximum of three days’ time.

Speaking during his visit to Puerto Princesa, Palawan on Thursday, Duterte said that he wanted to go around areas affected by the calamity in the coming days, although he admitted that he could not visit all areas due to problems regarding the possible landing site.

The President said that his wish was that the assistance, which are currently being downloaded to local government units (LGUs), would arrive before Christmas, Saturday.

(I hope that when the money reaches you, no matter how big or how small it is, as long as everybody gets a share, people who got affected by the typhoon would benefit from it. That’s my message, because that is what is taking us long, I am here but I cannot visit many places because airplanes and helicopters can’t even land.)

(So we’ll take a look at it, until Christmas I would work, I would not celebrate the New Year, I would really go out.  But just wait for it, I am trying to provide it in one to two days, before Christmas arrives, I don’t know, it’s being downloaded today.  If it arrives by Christmas I would thank God.)

If it does not arrive on time, Duterte asked for patience from the people, promising that it would arrive on a maximum of three days.

He also said that the military and police would refrain from taking holidays too, so that they can ensure that the distribution of grants would take place peacefully, and still in observance of health protocols due to COVID-19.

(But if it does not arrive by Christmas, please give me some elbow room, but that would surely arrive within three days.  I said we would be going into overtime, the government would not close down even during Christmas, I said that we would sacrifice given that we’ve had so many Christmases already.  This time, we’re giving it to the people.)

(That’s really what I could give, so we would work, along with the military and the police, they would stay put so that there would be no problems.  The police — or if they are not enough, the military — would enforce rules along the queue.  Not because I don’t believe the people, but just to contain the discipline and give everyone the chance to get the grants.)

Palawan was one of the areas ravaged by Typhoon Odette, which also hit the southern parts of Visayas and the northern portions of Mindanao from last Thursday to Saturday.

The devastation was so immense that several people described the cyclone as a super typhoon, comparing it to Super Typhoon Yolanda (Haiyan) which wreaked havoc over Eastern Visayas in 2013.

As of now, the National Disaster Risk Reduction Management Council (NDRRMC) has confirmed 258 dead due to Odette.

Duterte promised to provide a P10 billion fund for the government to respond to Odette’s devastation.  According to acting Budget Secretary Tina Rose Canda, P6 billion of the funds would come from the 2022 national budget once Duterte signs it into law — with P2 billion coming from the calamity fund while the remaining P2 billion would be sourced from his contingency fund.