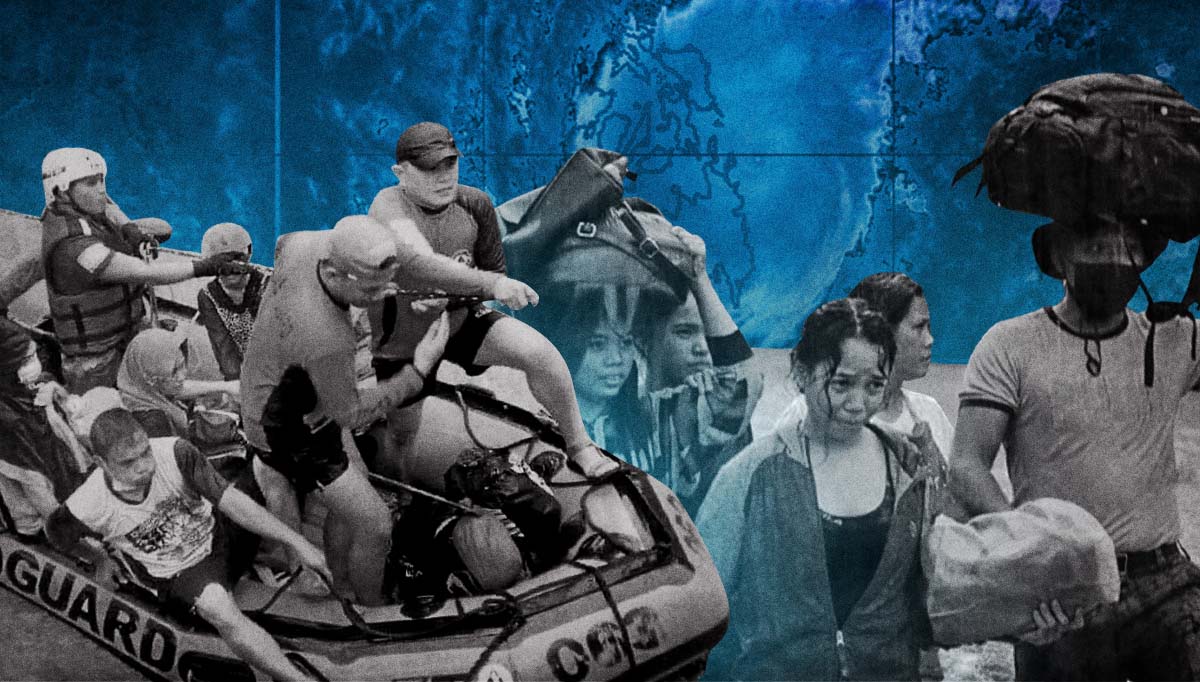 MANILA, Philippines—The extent of destruction dumped on the Philippines by Super Typhoon Odette (Rai) has not been fully inventoried but could be gleaned through one word used by scientists to measure the storm’s impact on at least five regions in the country—catastrophic.

Scenes reminiscent of Super Typhoon Yolanda (Haiyan), which ravaged parts of the Philippines in 2013, are rising like ghosts of Christmases past.

The scale of the relief effort needed is indescribable but could be partly painted by the presence of at least 10 United Nations agencies, 40 international and local nongovernment organizations and dozens of private sector groups that are now on the ground to help.

Map projecting levels of damage from Super Typhoon Odette (Rai) on countries on its path. FROM UN OFFICE OF COORDINATION FOR HUMANITARIAN AFFAIRS

A rapid assessment report by the UN Office of Coordination for Humanitarian Affairs (UN OCHA), which compiled damage estimates in areas hit by Odette, said initial data would show that at least five regions were hardest hit by the typhoon, which made landfall nine times carrying Category 5 winds of up to 260 kph.

These regions were Caraga, Western Visayas, Central Visayas, Eastern Visayas and Mimaropa, according to the UN OCHA report. The UN OCHA report said communities in three of the hardest hit areas—the provinces of Surigao del Norte, Dinagat Island and Southern Leyte—bore the brunt of Odette.

At least 95 percent of households in Siargao alone were affected in different ways—some losing their homes or seeing severe damage to their houses. “Banks and remittance centers were damaged and resumption of operations may take weeks,” said the UN OCHA report.

The report said the education cluster of the UN team on the ground reported up to 30,000 schools had been affected in 11 regions. These schools. have at least 12 million students, the report said.

The UN OCHA report said schools were either damaged or being used as shelters, which meant class activities—whether face-to-face or remote—were suspended.

In the first 72 hours, Odette cut power in 277 cities and towns while cutting communications in 135 other locations. On Dec. 19, or two days after Odette made its first landfall, power had been restored in only 21 of 95 cities and towns that lost their electric supply.

“Some major cities, including Cebu and Puerto Princesa, as well as large areas in Southern Leyte, remained without power even 72 hours after landfall,” the UN OCHA report said.

At least 80 seaports had been closed and 160 domestic and international flights had been cancelled.

The UN OCHA report counted initially 20,102 houses destroyed and 34,681 others damaged across the regions on Odette’s path. Houses made of light materials were hardest hit.

“In Loboc, Bohol, floods reached the roofs of houses and people were observed on their roofs waiting to be evacuated within hours after landfall,” the report said.

In the town of Bubong, Lanao del Sur province, 23 of 36 villages were flooded when the river overflowed.

“In Caraga, people built makeshift shelters beside houses and in the streets as infrastructures were heavily damaged,” the report said. “Local governments fear lack of necessities would result in potential looting,” it said.

“As assessments were yet to be conducted, partners were concerned that communities and response structures in Palawan were less experienced and might require significant humanitarian support in the coming weeks,” the report said.

As of Dec. 20, or four days after the first landfall, Puerto Princesa City remained without power, water and communication. The airport remained closed to commercial flights.

The provinces of Bohol, Cebu and Negros Occidental and Butuan City had declared states of calamity on Dec. 19 “though there is an expectation entire regions may be put under the state of calamity,” said the UN OCHA report.

It said Philippine government agencies had already asked for support from the UN team’s logistics cluster for transport of relief items to the hard-hit areas.

It said UN agencies with existing agreements with government agencies had also received requests for help from the government. “Assessment largely confirmed that additional capacity would be required to attend to growing humanitarian needs,” said UN OCHA.

But deployment by UN humanitarian partners, the report said, is being “hampered by prevailing COVID-19 related precautionary measures and travel restrictions.”

The trail of destruction left at least 385,374 people displaced or homeless with 10,856 houses destroyed or damaged in three areas alone—Surigao del Norte, Siargao Island and Southern Leyte. The data excluded those in Dinagat island.

What’s more disheartening, according to the report, was that nearly half—49 percent—of the people in the worst-hit areas were already living below the poverty line before Odette struck.

According to the UN OCHA report, basic needs included rice supply good for at least two months, meat, water and hygiene items. The supply of meat was expected to have been wiped out.

People who sought shelter in evacuation sites continued to plead for communication with their families through either satellite phones or other means of relaying messages.

“To rebuild livelihoods, fishing boats and gears as well as agricultural inputs are needed,” the UN OCHA report said.

Bringing in supplies was one of the biggest challenges. The report said supplies for Dinagat Island may have to come from Cagayan de Oro City, Davao City or the Agusan provinces.

Needed with urgency are food, potable water, fuel, medical supplies. In areas where markets had been restored, the UN OCHA report said, people were pleading for cash instead.

The UN team’s education cluster reported 29,671 schools affected and forced to suspend class activities. At least 71 schools were damaged and 3,935 classrooms were being used as shelters.

“The repair of damaged schools and classrooms was likely to take several months and hamper the education of learners,” the report said.

In areas where schools had been destroyed or damage, UN OCHA said the immediate needs were temporary learning spaces, learning kits and psychosocial support.

While assessment and documentation of the damage continued, UN OCHA said preliminary data showed 20,102 houses had been destroyed while 34,681 others had been damaged. Most are made of light materials.

In two areas—Siargao and Dinagat—“assessment indicated that 95 percent of structures in coastal areas were destroyed or damaged,” said the report.

Quoting the National Disaster Risk Reduction and Management Council, the report said as of Dec. 20 at least 631,402 people had been displaced in areas on Odette’s path.

In two areas—Surigao City and Bohol province—it was estimated that people may have to stay in evacuation centers for three to six months until their homes had been rebuilt.

People in Surigao City are appealing for supplies of corrugated sheets and tarpaulins as they start repairing their houses.

“Inside evacuation centers, assessments observed overcrowded spaces, especially at night when families come back to the center after repairing their homes,” the UN OCHA report said.

“Partners highlighted that the spread of COVID-19 was more likely in the crowded shelters,” it said.

The report took note of some positive developments in the telecommunications sector in the hardest-hit areas. “The private sector mobile operators were making progress in getting signals working again,” said UN OCHA.

The Department of Information and Communications Technology (DICT) had already asked for the help of World Food Programme to restore communications of government offices for better coordination and response.

Agriculture damage is a major concern, too, said the UN OCHA report. Two days after Odette’s first landfall, the Philippines’ Department of Agriculture already estimated initial loss of P127 million. This was the initial cost of at least 8,600 metric tons of produce destroyed. At least 6,695 hectares of farms were hit and 2,582 farmers were facing income loss.

“The effect of Typhoon Rai was expected to severely and negatively impact families dependent on farming and fishing as their primary or secondary source of livelihood,” said the UN OCHA report, using Odette’s international name.

Backyard gardens, which help families earn income and add nutrition to their food intake, had been destroyed.

“People, including farmers and fishers, were in need of food to prevent food insecurity,” said the UN OCHA report.

The lack of food carried security and law enforcement threats, the report said.

Displaced people, who have not been getting enough food, had admitted they may resort to “negative coping mechanisms”, like looting, in the absence of long-term food assistance.

In the region of Caraga, the UN OCHA report said, food stock may last only up to two months.

The impact of Odette on the Philippines’ vaccination campaign was significant, too, according to UN OCHA. It said at least 637 local governments had cancelled vaccination activities.