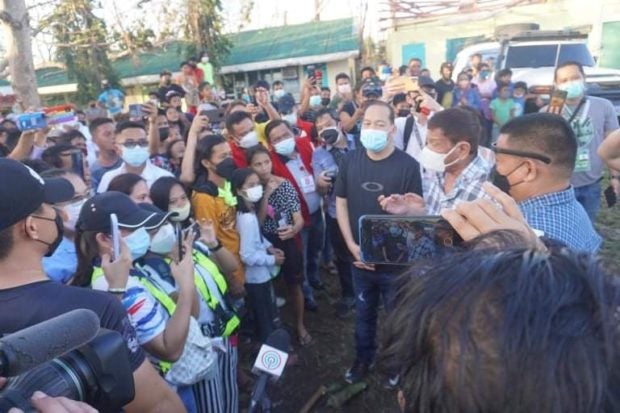 President Duterte gets a warm welcome during his visit in Inabanga town, Bohol to check on the damage brought on by typhoon “Odette.” Contributed /OPAV

MANILA, Philippines — President Rodrigo Duterte pledged to raise an estimated P10 billion in funds to address the devastation caused by Typhoon Odette in several parts of the country.

“President Duterte also vowed to raise additional funds, estimated at P10-Billion, for the rehabilitation and recovery efforts in the typhoon-affected areas,” said acting presidential spokesperson and Cabinet Secretary Karlo Nograles in a statement on Tuesday.

He added that aside from the funds, Duterte ordered national government agencies to respond to the concerns of local governments of Negros Oriental and Negros Occidental, the latter he visited on Monday.

The Department of Social Welfare and Development was instructed to continuously provide family food packs, water, and shelter assistance for families with destroyed houses.

Duterte directed the Department of Trade and Industry to look into and “monitor reports of price hikes, including generators, which are reportedly being sold at twice their usual prices.”

To help affected farmers and fisherfolk, the president tasked the Department of Agriculture to provide agricultural assistance.

The Department of Public Works and Highways will be responsible for clearing “uprooted trees along the roads and highways and to turn over these logs to the local government units for use as housing construction materials, as well as provide the needed support for river dredging as soon as funds are available.”

Duterte also sought for the immediate completion of the Kabankalan airstrip construction in Negros Occidental.

Meanwhile, Nograles expressed gratitude to the public for the assistance and in keeping the “bayanihan” spirit alive in this time of need.

“Our thoughts and prayers are with all the families affected by this natural calamity. We thank our people for showcasing the Filipino bayanihan spirit in helping our kababayans in this time of great need,” he said.

“We likewise express our sincere gratitude to our friends in the international community and partners for their show of support, solidarity, and readiness to extend assistance to the Philippines,” added Nograles.

On Monday, the Philippine National Police said that Odette killed at least 375 people.

However, the National Disaster Risk Reduction and Management Council on the same day announced only 58 reported deaths linked to the typhoon.