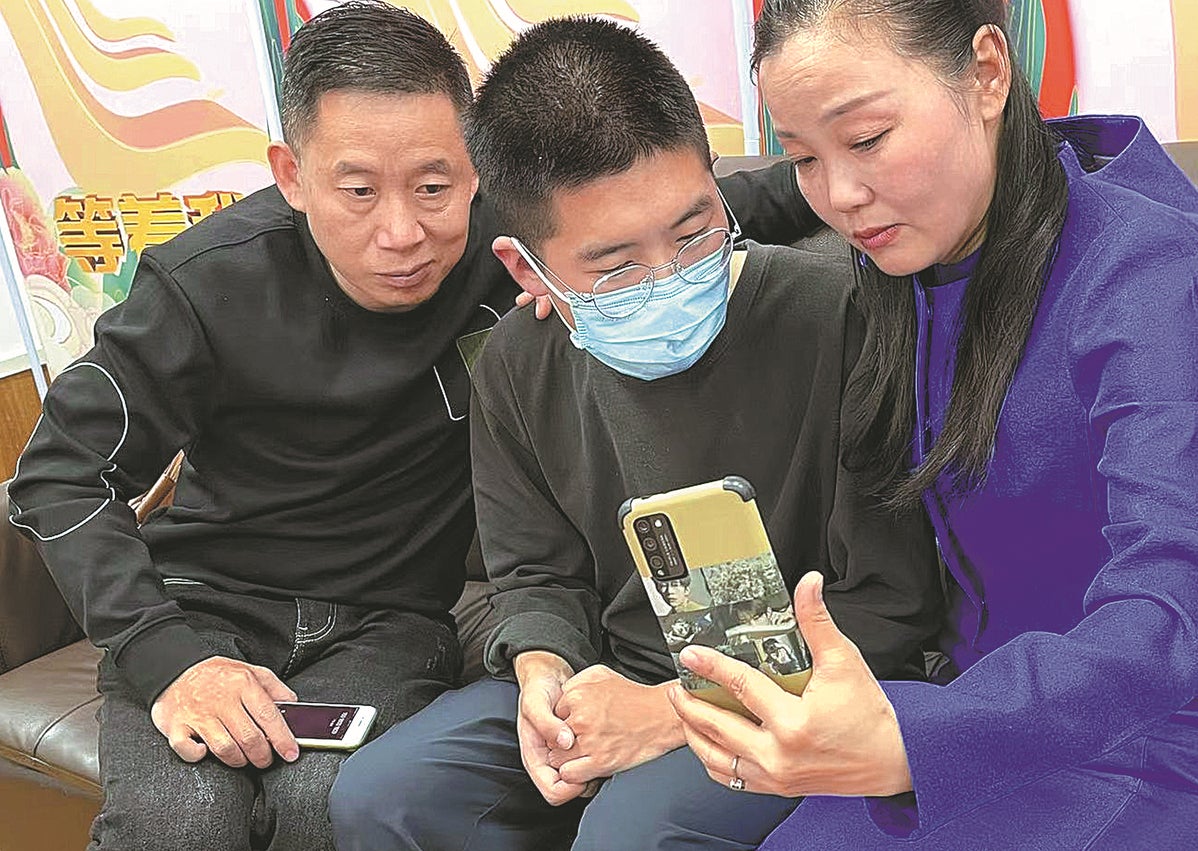 Long-lost son Sun Zhuo talks with his mother, Peng Siying, and his father, Sun Haiyang, in Shenzhen, Guangdong province, on Monday after being reunited. The 2014 Chinese movie Dearest was based on the case of Sun Zhuo, who was abducted at the age of 4 in 2007. DNA tests confirmed that the young man, who was found in Shandong province in October, was Sun Zhuo. | Photo provided to China Daily

BEIJING — After searching for their abducted son for 14 years, Sun Haiyang and his wife, Peng Siying, were reunited with the now 18-year-old in Shenzhen, Guangdong province, on Monday.

After hugging his son excitedly, Sun immediately called his mother to share the good news. “I am so happy that I finally found my son. I’ve been to so many places looking for him over the past 14 years. I couldn’t sleep well and was always worried about him. Before the reunion ceremony, I could only remember him as a 4-year-old,” he said after the ceremony.

Sun thanked public security officers for helping find Sun Zhuo and said he hoped his son could stay with the family.

Sun Haiyang comes from Jianli, Hubei province, and his son was born in 2003. In 2007, the family moved to Shenzhen to run a steamed bun shop in the hope of giving the boy a healthy environment.

However, on Oct 9 that year, Sun Zhuo was abducted by a man while playing in front of the family home at dusk.
Sun Haiyang and his wife remained in Shenzhen and kept the shop open, but constantly searched for their son, including offering a 200,000 yuan ($31,360) reward for finding the boy.

Sun Haiyang also helped other parents search for their missing children, working with police and media. “Over the past 14 years, I checked every clue anyone gave me,” he said. “Sometimes, I would be disappointed if I didn’t get a phone call for a few days. I was happy even when liars called me, saying they would exchange clues for the reward. At least, that gave me a glimmer of hope.”

Sun Haiyang’s quest to find his son was the basis of the 2014 movie Dearest, directed by Peter Chan Ho-sun and starring Huang Bo and Zhang Yi.

In a Weibo post, Zhang congratulated the family on the reunion, adding Sun Haiyang was the prototype for his character in the film and his pain left him lost for words when they met.

“I always worried about his son after the movie ended. I cried and watched the live broadcast of their reunion today. I want to send my appreciation to the police and hope there are no more abductions,” Zhang wrote.

Shenzhen police said they had placed great importance on the case and had continued their investigations. In October, police located a man from Yanggu county, Shandong province, who they suspected had abducted Sun Zhuo.

At the same time, a young man in the county was located who was similar in appearance to childhood photos of Sun Zhuo. DNA tests confirmed that the young man was Sun Zhuo, police said. The suspect has been detained as further investigations are conducted.

Sun Zhuo said on Monday he was unaware he had been abducted until police contacted him, but added the family who raised him had treated him well.

Two other families were also reunited with their abducted boys at the reunion ceremony held by the Ministry of Public Security. Ministry officials pledged on Monday to do their utmost to resolve abduction cases, find missing children and crack down on such crimes.

From January to November, public security bodies nationwide resolved over 290 child abduction cases, arrested over 690 suspects and found 8,307 children under a campaign to locate missing people that was launched at the beginning of the year, the ministry said.

3-year-old Chinese boy sold by parents for $17,000 reunited with grandfather