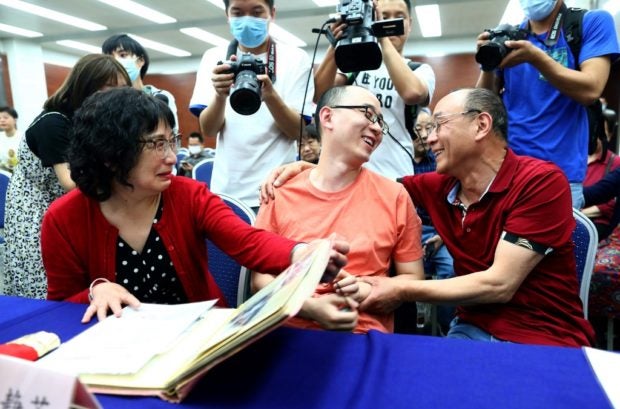 A Chinese man kidnapped as a toddler 32 years ago has been reunited with his biological parents, after police used facial recognition technology to help track him down.

Mao Yin was just two when he was snatched outside a hotel in Xi’an in central Shaanxi province in 1988 and sold to a childless couple in neighboring Sichuan province who raised him as their own son, Xi’an’s public security bureau said in a statement.

Police “aged” one of Mao’s childhood photos, according to state broadcaster CCTV, and used the model to scan the national database and find close matches.

They were acting on a tipoff that a person in a certain area of Sichuan had bought a child in the late ’80s.

On Monday, the now 34-year-old had a tearful reunion with his birth parents who had never given up the search for their missing boy.

Mao’s mother Li Jingzhi told CCTV that after he was taken, she quit her job and sent over 100,000 flyers to officials and appeared on several TV channels to appeal for his return.

Over the past three decades, Li had followed 300 false leads to see if they were her missing son.

But in late April, police in Xi’an were tipped off that a man in Sichuan province had bought a child from Shaanxi in the late 1980s, according to the statement from Xi’an officials.

Police tracked down Mao and later confirmed he was the abducted son of Li Jingzhi after a DNA test.

Mao’s adoptive parents had renamed him Gu Ningning, and he grew up without any knowledge of his birth parents or that he had been abducted.

At the reunion event, organized by Xi’an police, Mao emerged from a side door to a conference room and ran into his mother’s arms. 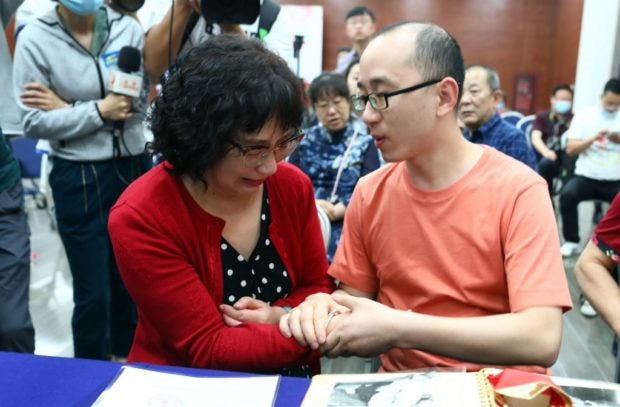 This photo taken on May 18, 2020 shows Mao Yin (R) with his mother Li Jingzhi after they were reunited in Xian, in China’s northern Shaanxi province. Image: STR/AFP/China OUT

Mao, who runs a home decoration business in Sichuan, told CCTV he would move to Xi’an to live with his birth parents.

There are no official statistics on the number of children who disappear every year in China, but a system was established in 2016 to send alerts about missing children through social media and mobile phone texts.

Police have helped more than 6,300 abducted children to reunite with their families over the past decade through the DNA matching system, official news agency Xinhua reported.

Kidnapping and child trafficking became widespread in China from the 1980s, when the draconian one-child rule was enforced, with a cultural obsession with sons also fuelling demand for kidnapped babies. NVG

Read Next
Sinas on mañanita issue: I moved on, I hope critics can move on too
EDITORS' PICK
House energy committee chair Arroyo bats for cheap electricity
The vivo Y16 makes the season of giving more thoughtful for the whole family
PNP: To avoid crypto scam, visit BSP website
Pagasa: 1 to 2 storms expected in December
LPG prices up by P2.25-P2.27/kg effective Dec 1
The Best Tech Gifts For The 2022 Holidays
MOST READ
LOOK: Kris Aquino visited by ‘Kris TV’ sidekick Darla Sauler in US
Maharlika fund has Marcos go signal – Diokno
3 suspects in slay of 2 Quezon women nabbed in Tagaytay City
SSS: Pensioners 13th month, year-end benefits to be released first week of December
Don't miss out on the latest news and information.