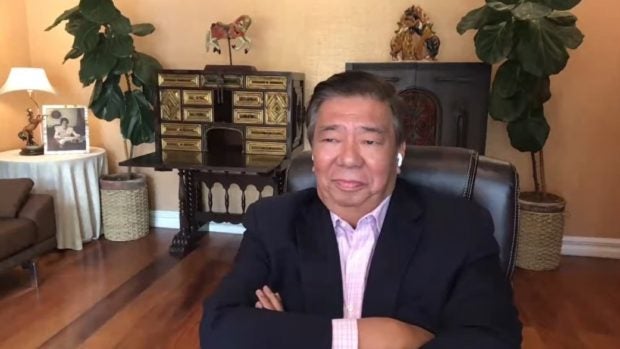 MANILA, Philippines — Minority Floor Leader Franklin Drilon agreed on Monday with the move to extend the validity of the 2021 budget until December 2022, but he stressed that the government should not get accustomed to the practice.

During the deliberation of House Bill No. 10373 — which was brought to the Senate after being approved by the House of Representatives — Drilon asked Sen. Sonny Angara about how much of the current budget had been obligated, which would allow lawmakers to gauge the government’s efficiency in implementing projects.

Angara, who is sponsoring the bill, said 56.3 percent of the budget had been obligated as of Sept. 30.

Drilon pointed out that the figure was lower than the 78.4 percent achieved in 2020.

Angara noted, however, that the 2020 figure also covered the months of October and November.

Still, Drilon said that the government should not be inefficient.

“Principally, we are agreeing to the extension because to cast a negative vote would punish our people for the inefficiencies of the bureaucracy,” he said. “But we do hope that this is not a yearly occurrence, the failure to disburse it on time, because government spending, if I recall correctly, constitutes 20 percent of our gross domestic product.”

“We have no objection to the extension of the General Appropriations Act, but I want just to make of record that we are agreeing for the extension because we do not want our people to suffer from the inefficiencies of the bureaucracy, the lack of absorptive capacity which has existed over the years,” he added.

“And if we do not disburse the appropriated funds on time, we will not be able to achieve the GDP for the country because the government has failed to disburse these funds,” he went on.

Angara noted that it would be “safe to assume” that two months’ worth of government spending would push the budget obligation rate past 56.3 percent. However, in his sponsorship speech, he said that some agencies might not be able to complete their projects if the budget would not be extended.

Under the current cash-based budgeting system used by the government, all appropriations that are left unused by the end of the fiscal year — in this case by Dec. 31, 2021 — would be returned back to the National Treasury.

But if Congress approves an extension of the budget — and if President Rodrigo Duterte signs it — programs can continue obligating and using funds until Dec. 31, 2022.

“Mr. President, this measure is most critical since the amounts that would be affected are quite significant,” Angara said in his speech.

“Based on the latest publicly available data from the DBM or the Department of Budget and Management, covering January to September 2021, only 74.5 percent of the allotments available as the current year budget have been obligated or legally set aside to be spent for government projects, programs, or activities,” he went on.

“We are hopeful that throughout the fourth quarter, government agencies can obligate more of these appropriations as we speak. But the unobligated balance is quite significant for us to reasonably expect that they can obligate all of it in such a short period of time,” he added.

For DPWH, that means contractors would get paid especially since companies had to deal with COVID-19 restrictions, considering two case surges in 2021 that forced hard lockdowns in many areas.

For the DOH, that means more indigent patients may get assistance for their medical concerns.

“Many of their contractors faced mobility restrictions due to the different quarantine policies of both the national government and of the local government units (LGUs). And that inevitably lengthened project timelines and work schedules,” Angara said.

“If we look at the budget of the Department of Health, extending the 2021 budget’s validity will open up the opportunity the 2.5 million more indigent patients to benefit from government assistance, given that a large portion of the budget under “Medical Assistance for Indigent Patients has yet to be obligated,” he added.