MANILA, Philippines — Some 2.5 million Filipino families across the country experienced hunger due to lack of food at least once in the previous three months, the latest survey of the Social Weather Stations (SWS) has shown.

“The resulting 13.5 percent average for the first three quarters of 2021 is less than last year but has not fully recovered to pre-pandemic levels,” the SWS explained.

The SWS said the survey was conducted from September 12-16, 2021, using face-to-face interviews of 1,200 adults (18 years old and above) nationwide — 300 hundred families each in Metro Manila, Luzon, Visayas, and Mindanao. 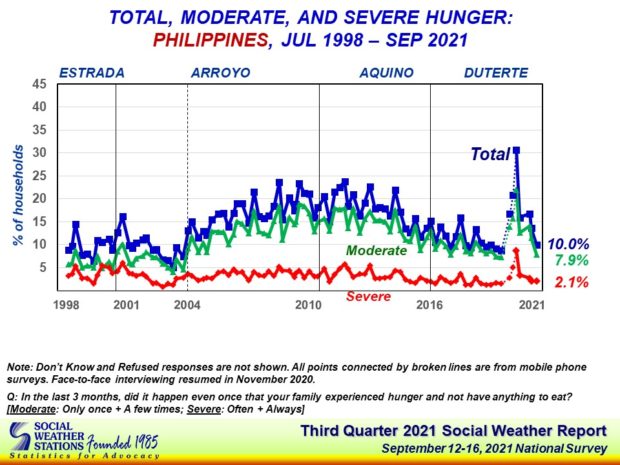 Based on the Third Quarter 2021 Socia Weather Survey released Monday, hunger has decreased in all areas except in Metro Manila where the rate was highest at 14 percent. Involuntary hunger incidence was at 10.3 percent in Central Luzon and Mindanao and at 6 percent in the Visayas, the survey also indicated.

This means that the 3.6-point decline in overall hunger between June and September this year was due to decreases in all areas except in Metro Manila, the SWS explained.

In the Visayas, both moderate hunger and severe hunger decreased to 5 percent and 1 percent, respectively, in September compared to June’s 7 percent and 1.3 percent.

In Mindanao, the September survey showed that moderate hunger decreased to 9 percent while severe hunger remained at 1.3 percent. It was 13.7 percent and 1.3 percent in the region in June. 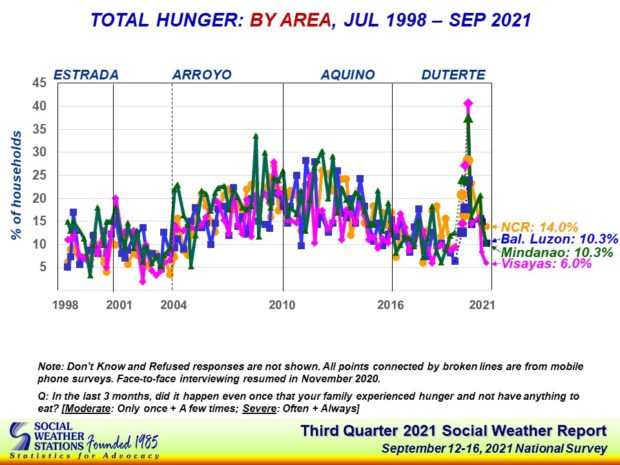 Hunger eases among poor and non-poor

According to the SWS, the rate of overall hunger (moderate plus severe) fell among the self-rated poor from 15.7 percent to 14.3 percent in the third quarter of this year. It also fell among the non-poor over the same period from 11.7 percent to 6.5 percent.