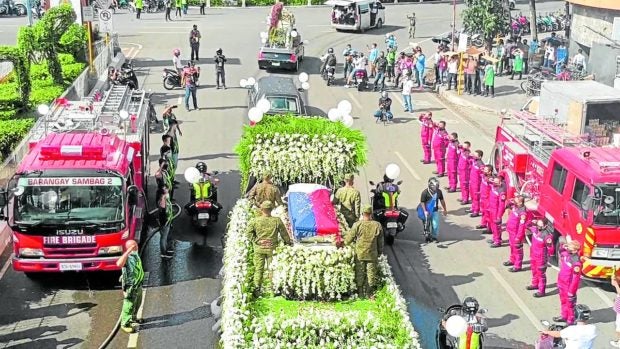 FITTING FAREWELL The funeral procession of Cebu City Mayor Edgardo Labella passes by Fuente Osmeña in uptown Cebu City as firemen give him a water cannon salute before he was laid to rest on Nov. 26. —DALE ISRAEL

CEBU CITY — Cebuanos lined up on the streets along the funeral route for the late Cebu City Mayor Edgardo Labella, raising white flags, as the truck decked in white flowers carrying his remains passed by on Friday.

The Cebu City Fire Department also stationed their fire trucks along some streets in Cebu City and gave Labella a water cannon salute while sirens reverberated as the funeral procession passed by.

At least 20 city-owned buses and 20 coasters were deployed for residents who wanted to join the 15-kilometer funeral procession leading to Labella’s final resting place at the Golden Haven Memorial Park in Barangay Talamban in this city.

A 21-gun salute was accorded by the city police and the Armed Forces of the Philippines before he was interred past 3 p.m. The mayor’s wife, Joycelyn, received the Philippine flag on behalf of her family, with their sons Jaypee and Eugene Philippe.

Labella was laid to rest eight days after he died due to septic shock secondary to pneumonia.

The 70-year-old chief executive, who assumed the top post in Cebu City in 2019, was the first city mayor to die while still in office.

Prior to his funeral, Labella’s remains were transferred from the City Hall to the Cebu Metropolitan Cathedral for the requiem mass officiated by Cebu Archbishop Jose Palma.

In his homily, Palma described Labella as a good leader who made himself available to Cebuanos since 1998 when he began his political career in the city as councilor and later as two-term vice mayor before he was elected mayor in 2019.

Before joining the city’s politics, Labella served as director of the Office of the Ombudsman in the Visayas from 1994 to 1998.

“He had a mission to fulfill. Perhaps that was why he survived a shipwreck in 1998,” said the prelate, referring to how Labella escaped death when passenger ferry MV Princess of the Orient sank in 1998.

“Mayor Labella continued to serve the city during the COVID-19 pandemic even if he was already ailing,” Palma added.

After the Mass, Labella was placed on a truck decked with white flowers and white balloons, and escorted by four military men, for the funeral procession. —REPORTS FROM DALE ISRAEL AND NESTLE SEMILLA