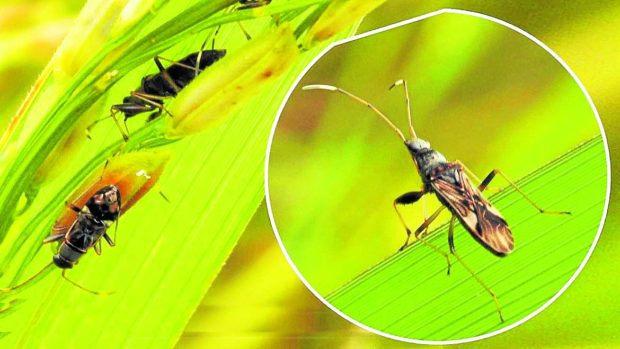 PESTS The Department of Agriculture in Cagayan Valley has raised an alert over the swarms of black bugs, locally known as “itim na atangya,” that have infested farms in 14 towns in the provinces of Isabela, Quirino and Nueva Vizcaya. The pests attack rice plants at all stages of growth, according to the DA. —IMAGE COURTESY OF DEPARTMENT OF AGRICULTURE

TUGUEGARAO CITY — At least 14 farming towns in Cagayan Valley have been pestered by an infestation of black bug (Scotinophara coarctata), or itim na atangya, prompting the regional Department of Agriculture (DA) office to intensify information drives and preventive measures.

Mindaflor Aquino, a senior science research specialist of the DA’s Crop Pest Management Center in Region 2, has said they have been documenting the palay disease in Cauayan City and in the towns of Burgos, San Guillermo, San Mateo, Cabatuan, Roxas, Alicia, Aurora, San Manuel, Mallig, and San Agustin, all in Isabela province; in the towns of Diffun and Cabarroguis in Quirino Province; and Solano in Nueva Vizcaya province.

He said the DA was still validating the extent of the damage.

But this early, he said local agricultural officials were reporting minimal damage to rice fields as most farmers were still preparing their land for the next cropping season.

The pests are known to attack rice plants at all stages of growth but are most destructive during the tillering and ripening stages.

An interagency task force was formed by the Isabela provincial government to plan and impose protocols to assist affected farmers. —VILLAMOR VISAYA JR.