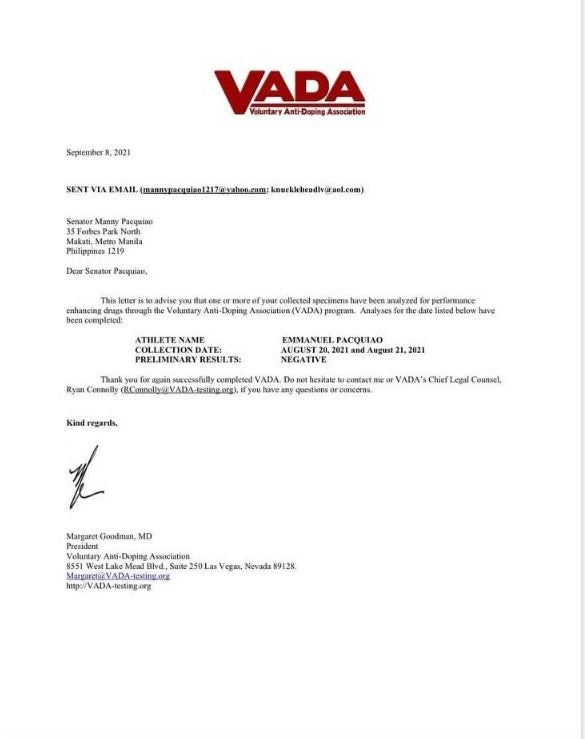 The camp of presidential aspirant Senator Manny Pacquiao said the tests cover many performance-enhancing drugs, including steroids and stimulants such as cocaine and methamphetamine.

MANILA, Philippines — The camp of presidential aspirant Senator Manny Pacquiao on Tuesday released his drug test results taken in July and September this year after President Rodrigo Duterte claimed a “cocaine user” is running for president.

Pacquiao’s camp said he took the test before his fight against Youdenis Ugas in Las Vegas this year. The test was conducted by the Voluntary Anti-Doping Association (VADA) on July 28 and Sept. 8.

The camp said the tests cover many performance-enhancing drugs, including steroids and stimulants such as cocaine and methamphetamine.

“In both tests, Pacquiao was found negative of any of the substances prohibited by the World Boxing Council (WBC),” the camp said in a statement.

The camp said the tests cover “hundreds more prohibited substances,” making it “more extensive” than the regular drug tests conducted in the Philippines.

Before any athlete is allowed to compete in international competitions, they must undergo an anti-doping test to ensure that they are not using any prohibited substance to improve their performance.

Pacquaio’s camp said the boxer-turned-senator is scheduled for a hair follicle test and had wanted a laboratory that can deliver immediate results.

Other presidential aspirants, including Senator Panfilo Lacson and former senator and scion of a late dictator Ferdinand Marcos Jr., had released negative drug test results to show they are not the ones being alluded to by President Duterte.

Lacson himself went to the Philippine Drug Enforcement Agency (PDEA) to have the test administered alongside his running mate Senate President Vicente Sotto III, while Marcos had the test done privately and only submitted the results to authorities.

READ: Marcos says he tested negative in cocaine test, insists he wasn’t being alluded to by Duterte“

President Duterte earlier questioned the leadership skills and the contribution of a presidential bet, who he claimed is using illegal drugs, calling him a “weak leader.”

In a separate speech, Duterte said the presidential aspirant eluded police by doing illegal activities in exclusive places such as yachts and private planes.