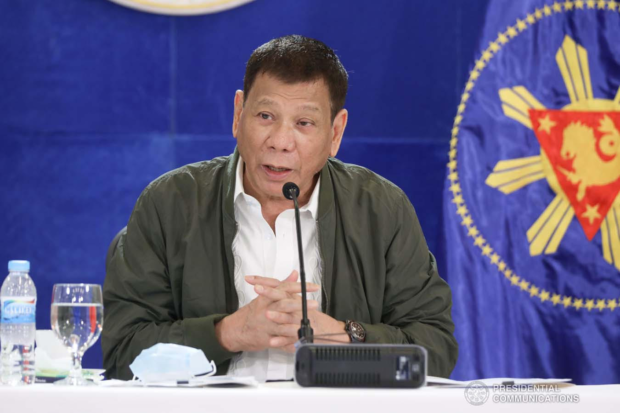 MANILA, Philippines — President Rodrigo Duterte on Monday said the unnamed presidential aspirant, whom he accused of doing cocaine, was able to escape apprehension because he does the illegal act in places like on a yacht or a private plane.

Duterte made this statement to address criticisms about why the presidential aspirant was able to elude police, especially when his administration implemented its brutal war on drugs that killed small-time drug users and pushers.

(You can ask the rich people. The police would ask ‘why didn’t we apprehend, why didn’t you arrest, President?)

“Hindi mo alam, ang mga mayayaman, they go on a yacht or in the air doon ‘yan sila magsupsop ,” he added.

(You don’t know, rich people, they go on a yacht or in the air to do their sniffing.)

Duterte said it is up to the people whether to believe him or not, but added that he only divulged the information so that he would not be blamed later for keeping it.

“Kung maniwala kayo, tutal marami namang mayaman na matanong ninyo, itanong ninyo. If you do not believe it then leave it that way,” he said.

“Basta sinabi ko. Do not let it be said later on that I did not tell you,” he added.

Last week, Duterte accused a presidential aspirant in the May 2022 elections of being into cocaine and described the person as someone belonging to a rich family that is known for its patriarch. He even questioned the contribution of the presidential aspirant to the country as he also said the individual is a “weak leader.”

“There’s even a presidential candidate na nag-cocaine (using cocaine). May kandidato tayo na nagko-cocaine ‘yan (A candidate is doing cocaine). ‘Yang mga anak ng mayaman (from a rich family),” he said in his speech during the meeting of the national and regional task force to end local communist armed conflict in Mindoro last Thursday, November 18.

“Anong nagawa ng tao na ‘yan (What did that person do)? What contribution has he made para sa (for the) Pilipinas (Philippines)? Bakit ang Pilipino parang lokong-loko na supporting (Why are Filipinos so crazy about supporting that person)…,” he also said.

(It’s up to you whatever you want. That’s up to you, but for me, when the time comes, don’t say I did not tell you, he is a very weak leader, the character, except for the name… the father… but that person, what did that person did?)

For its part, the Philippine National Police said it is trying to get additional information on the alleged cocaine-using presidential aspirant as hinted by the President.

To recall, Duterte in a separate speech has called Ferdinand “Bongbong” Marcos Jr., a scion of the late dictator former President Ferdinand Marcos, as a “weak leader” as he rejected the idea of forming an alliance with Lakas-CMD, the political party of her daughter, incumbent Davao City Mayor Sara Duterte-Carpio, who will run for vice president in tandem with Marcos Jr. in next year’s polls.

The camp of Marcos Jr. has brushed aside Duterte’s remarks, saying they feel that their candidate is not the one being alluded to by the President.

Meanwhile, in an effort to prove they were not the ones being alluded to by Duterte, presidential aspirant Senator Panfilo Lacson, along with his running mate Senate President Vicente Sotto III, went to the Philippine Drug Enforcement Agency to undergo voluntary drug testing.

They were found negative for cocaine and other illegal drugs.