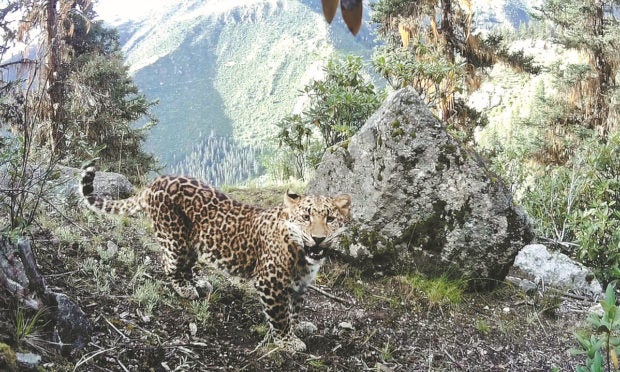 BEIJING — The rare discovery of a group of wild leopards was made by Chinese researchers in Lhorong county, Tibet autonomous region, the National Forestry and Grassland Administration said recently.

According to the department’s Central South Inventory and Planning Institute, which has been conducting field studies on the distribution of the species on the Qinghai-Tibet Plateau, the newly discovered population is the largest on the plateau in terms of number, range and density of population.

Listed as a first-class State-protected animal in China, the leopard was once widespread across Asia and Africa, the largest and most widely ranging member of the large carnivorous cat family.

China is also home to the snow leopard, Panthera uncia, a different species, and may also be home to Acinonyx jubatus or the Cheetah. Of the three leopard subspecies, the North China leopard is endemic.

Researchers at the institute have been finding leopard traces in Tibet during wildlife surveys for almost a decade.

“Since 2013, surveys and studies have been conducted in the areas of Chamdo, Nyingchi, and Shigatse, with the coordination and support of the Regional Forestry and Grassland Bureau,” said Tang Zijun, an engineer at the institute.

In 2019, researchers with the institute carried out field studies on the distribution and habitat of leopards in eastern Tibet’s Chamdo area, and infrared cameras were set up in the wilderness.

“A great deal of firsthand field investigation data has been collected over the past three years, including images of wild animals captured on infrared cameras and samples of hair, feces, and other traces,” Tang said.

According to both the data and a comprehensive analysis of historical documents, leopards in Tibet are mainly found on the southern slopes of the middle section of the Eastern Himalayas in southern Tibet, and the Hengduan Mountains in eastern Tibet, mostly in forests and vegetated areas at altitudes ranging from 2,000 to 5,000 meters above sea level.

The institute’s latest survey also discovered that there is a large population of leopards living in the upper reaches of the Nujiang River.

Some 210,000 photos and videos were taken, in which were more than 300 images and videos of leopards.

Through individual pattern recognition technology, more than 30 individual leopards have been identified in Lhorong, all North China leopards. The county is also home to about 20 snow leopards. The two species are coexisting in the same area.

“There are up to four to five cats from both species per 100 sq km in the same area. Compared to the usual number and density for large cats, this is high,” said Tang, adding that it is a surprising density for big cats anywhere in the world.

Guo Keji, a senior engineer at the institute, said that in the past 100 years, the leopard population has decreased sharply due to the loss of habitat and prey, as well as human demand for their fur.

“On the IUCN (International Union for Conservation of Nature) Red List, the leopard is rated as NT (Near Threatened),” he said. “The latest research will fill a blank in the studies of leopard distribution on the Qinghai-Tibet Plateau.”

Tibet has made great efforts to advance natural, ecological and environmental protection.

According to Guo, after more than 30 years of construction and development, 47 nature reserves have been established in the region, covering an area of more than 412,000 sq km and accounting for more than 34 percent of Tibet’s land area.

“A system of well laid-out, fully equipped nature reserves with strong systems of protection and effective management has been created,” he said.

In the future, researchers will cooperate with the region’s local forest and grassland authorities to monitor the leopards.

“Such research will provide an important scientific basis for the protection and management of leopards and their habitats.”

China aims to build its own Yellowstone on Tibetan plateau