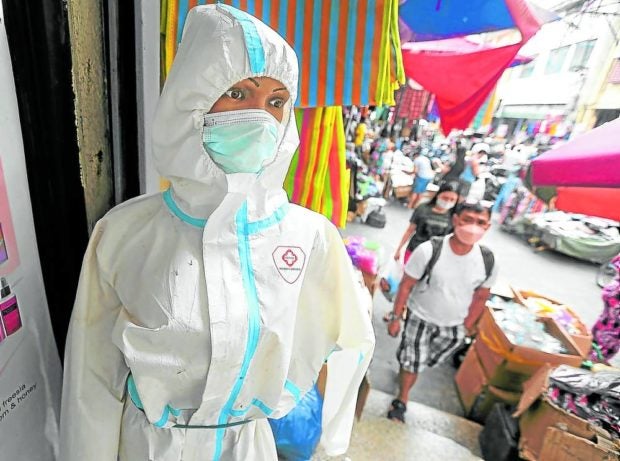 LIFE-SIZE REMINDER A mannequin in a personal protective equipment suit is put up in front of a store along Carriedo Street in Quiapo, Manila, to remind people that there is still a COVID-19 pandemic. — MARIANNE BERMUDEZ

MANILA, Philippines — Only 984 new infections were added to the country’s total COVID-19 caseload on Monday, the Department of Health said, with 2,229 additional recoveries, bringing down active cases to 19,798.

This is the second lowest daily count the country has recorded in November, with the lowest recorded on Nov. 16, with 849.

However, the DOH said two laboratories were not operational during the 35,901 total tests conducted on November 20, while three labs were not able to submit their data. These labs contribute, on average, 2.7 percent of samples tested and 2.0 percent of positive individuals.

The new cases, meanwhile, account for 2.8 percent of the individuals tested, almost half of 5-percent threshold set by the World Health Organization (WHO), which indicates that coronavirus transmission in the country is under control.

On the other hand, of the 19,798 patients currently afflicted with the deadly virus, 56.6 percent only suffer mild cases, 4.6 percent asymptomatic, 20.02 percent moderate, 13.3 percent severe, and 5.6 percent critical.

The health agency also said that 447 duplicates were removed from the total case count — of which 434 were recoveries and 4 were deaths.

“In addition, 94 cases were found to have tested negative and have been removed from the total case count. These 94 are recoveries,” said the DOH.

“Moreover, 169 cases that were previously tagged as recoveries were reclassified as deaths after final validation,” it added.