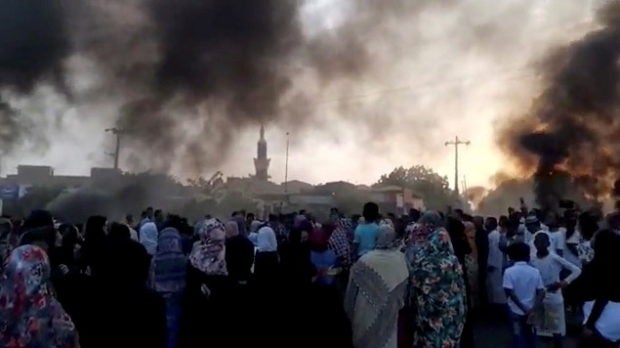 People gather on the streets as smoke rises in Kartoum, Sudan, amid reports of a coup, October 25, 2021, in this still image from video obtained via social media. RASD SUDAN NETWORK via REUTERS

KHARTOUM, Sudan — Sudanese authorities released Al Jazeera television’s Khartoum bureau chief on Tuesday, the Qatar-based network said, two days after security forces arrested him from his home.
The arrest of Al-Musalami al-Kabbashi was the latest since a military coup three weeks ago and came after tens of thousands of protesters took to the streets on Saturday to demand a transition to civilian rule.
Kabbashi, a Sudanese citizen, “was released on Tuesday… the military has yet to give a reason for his detention,” the network said.
The editor in chief of the armed forces newspaper,  Ibrahim al-Hory, charged that Al Jazeera had “published unrealistic reports and released old videos and hosted hostile personalities that instigated strife.”
Al Jazeera has given prominent coverage to the anti-coup demonstrations, but has also aired a detailed interview with top general Abdel Fattah al-Burhan.
Late Monday, Al Jazeera reported that Kabbashi had been taken to prison despite a prosecutor’s order for his release.
Judicial decisions have been disregarded on several occasions since the coup. Lawyer Enaam Attik told AFP that prosecutors had ordered the release of 50 people arrested during Saturday’s rallies but “police took them to an unknown location”.
The internet has remained largely cut in Sudan despite a court order last week to restore services.
Burhan declared a state of emergency on October 25, ousted the government and detained the civilian leadership.
The army’s power grab has derailed a transition to full civilian rule, sparked international condemnation and provoked regular protests.
Burhan insists the military’s move “was not a coup” but a push to “rectify the course of the transition”.
The anti-coup demonstrations have been met by a deadly crackdown that has left at least 23 people dead. Saturday was the bloodiest day so far with eight people killed, medics said.
ADVERTISEMENT
FEATURED STORIES
NEWSINFO
Tulfo grills BIR, BOC for going after online sellers instead of oil smugglers
NEWSINFO
1 dead, 2 hurt as old chopper crashes in Clark
NEWSINFO
SRA planters representative vows to resign if Bongbong Marcos says so
Read Next
Parlade claim vs Go ‘does not embody the position’ of DND and AFP, senators told
EDITORS' PICK
College aid fund mess hits students hard – Hontiveros
House panel okays bill postponing barangay, SK polls
QC school’s shutdown violated rules – CHEd
House energy committee chair Arroyo bats for cheap electricity
The TECNO Camon 19 Series Philippine launch
Unleash the photographer in you this World Photography Day with vivo smartphones
MOST READ
‘Dream team’: Raffy Tulfo sees no issue with ABS-CBN, TV5 merger
Man jumps off LRT station in Monumento, causes limited train ops
LOOK: Mavy Legaspi gifts Carmina Villaroel with Hermes bag on her birthday
QC school’s shutdown violated rules – CHEd
Don't miss out on the latest news and information.