Parlade claim vs Go 'does not embody the position' of DND and AFP, senators told | Inquirer News
Close
menu
search

Parlade claim vs Go ‘does not embody the position’ of DND and AFP, senators told 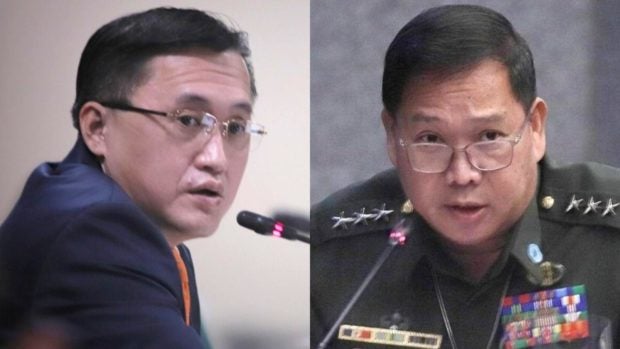 MANILA, Philippines — The recent remarks of retired Army officer Lt. Gen. Antonio Parlade against Senator Bong Go “does not, in any way, embody the position” of the Department of National Defense (DND) and the Armed Forces of the Philippines (AFP), senators were told Tuesday.

During the plenary debates on the proposed 2022 budget of the DND, Senate Minority Leader Franklin Drilon questioned Parlade’s claim that Go’s control of President Duterte’s decisions was generally known among AFP officers.

Senator Ronald “Bato” dela Rosa, who was sponsoring DND’s budget, said the heads of the DND and the AFP “vehemently deny” the statement made by Parlade.

“I was able to talk to the [AFP] chief of staff, Gen. Andres Centino, and [DND] Sec. [Delfin] Lorenzana about that matter…They said that the statement of Gen. Parlade is his personal opinion and it does not, in any way, embody the position of the whole Department of National Defense and the Armed Forces of the Philippines,” Dela Rosa told his colleagues.

“They cannot categorically say that Gen. Parlade was lying, he is just expressing his own opinion but if you ask the opinion or the sentiments of these two gentlemen, they will readily say to you that what Gen. Parlade was saying was baseless,” the senator added.

“It was a baseless statement. But as far as [Sec.] Lorenzana and the AFP hierarchy [are concerned] wala po silang masasabing basehan do’n sa accusation ni Gen. Parlade. We will respect his personal opinion if that is his personal opinion but it does not in any way embody the sentiment of the whole [DND and AFP],” Dela Rosa also said.

Both Duterte and Go have separately denied that the latter is controlling the decision-making of the executive branch.

READ: Bong Go ‘does not control me,’ says Duterte

Parlade, who served as the spokesperson of the National Task Force to End Local Communist Armed Conflict (NTF-ELCAC), made the allegation against Go after filing his candidacy for president in the 2022 elections.

Parlade resigned from the controversial NTF-ELCAC in June before retiring in July as commander of Southern Luzon Command, when he reached the mandatory retirement age of 56. He was appointed as deputy director general of the National Security Council in September.