Nograles: If Duterte wins senatorial race, he may release SALN if Senate requires 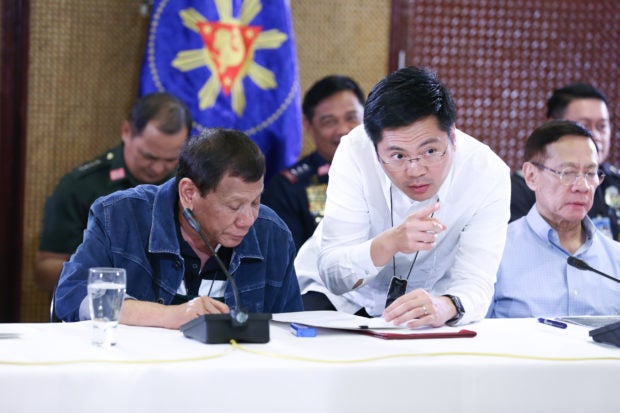 MANILA, Philippines — Should President Rodrigo Duterte win in the senatorial race in the 2022 elections, he may release his statement of assets, liabilities, and net worth (SALN) as long as it is required in the upper chamber of Congress.

This was acting presidential spokesperson Karlo Nograles’ answer during the Palace press briefing on Tuesday when asked if Duterte will make public his SALN like other senators, should he succeed in securing a seat in the Senate.

“Hindi ko alam anong protocol sa Senado (I do not know the protocols in the Senate). But, whatever it is, I’m sure the president will follow whatever protocols or practices there are in the Senate,” Nograles said.

“When he wins as senator of our republic, then he will follow kung ano ‘yung mga (the) policies, procedures, and protocols of the Senate,” he added.

In September, the Ombudsman denied the request of lawyers to get a copy of Duterte’s SALN.

Ombudsman Samuel Martires, who was appointed to his post by Duterte in 2018, justified that the rejection of the requests was pursuant to Ombudsman Memorandum Circular No. 1-2020, which he himself issued.

Under the circular, a copy of the SALN may be given to the following: the official him or herself or his duly authorized representative, through a court order for a pending case and the request is made by this Office’s Field Investigation Office/Bureau/Unit for the purpose of conducting a fact-finding investigation.

For around the past three decades, SALNs of Philippine presidents, Cabinet secretaries, and other government officials have been generally readily available – until the Duterte administration.

Sotto: Duterte should disclose his SALN