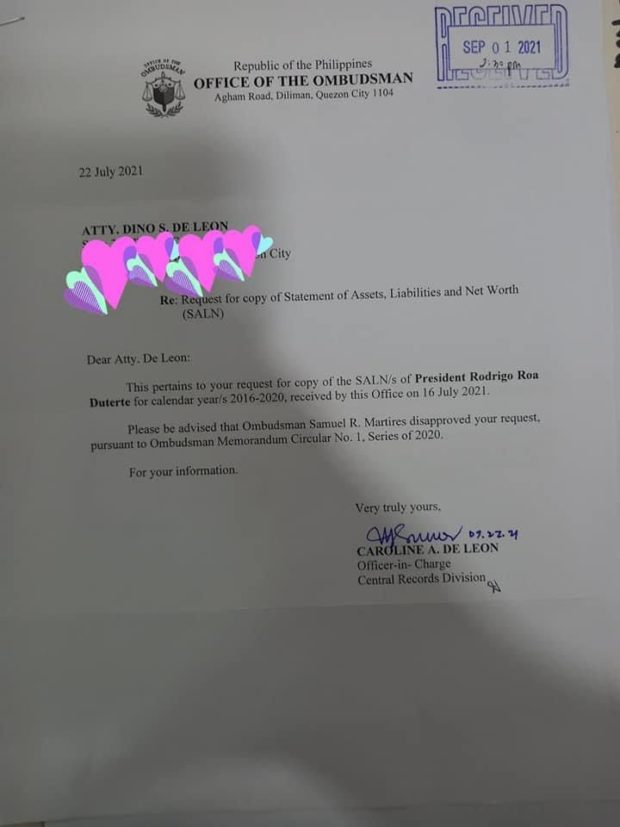 The Office of the Ombudsman denies the request of lawyers to release copies of President Rodrigo Duterte’s statement of assets, liabilities, and net worth. From the Facebook post of lawyer Dino de Leon

MANILA, Philippines — The Office of the Ombudsman refused to release a copy of President Rodrigo Duterte’s statement of assets, liabilities, and net worth (SALN) to requesting lawyers.

(Why are they so afraid to show the president’s SALN? If they are not hiding anything, they should not be afraid.)

The document stated that Ombudsman Samuel Martires rejected the request, pursuant to Ombudsman Memorandum Circular No. 1, series of 2020.

Under the circular, a copy of the SALN may be given to the following: the official him or herself or his duly authorized representative, through a court order for a pending case and the request is made by this Office’s Field Investigation Office/Bureau/Unit (FIO/FIB/FIU) for the purpose of conducting fact-finding investigation.

De Leon, in his Facebook post said that in 2020, he, along with lawyers Josef Leroi Garcia and Teddy Rigoroso, were requested by opposition Senator Leila de Lima to make a Freedom of Information (FOI) request on Duterte’s SALN.

Duterte’s Executive Order on FOI allows the access of government officials’ SALN in accordance with existing laws, rules and regulations.

“As an advocate of the People’s Right to Know, I personally did the request, and such was denied by the Office of the President stating that the SALN should be requested through the Office of the Ombudsman as the official repository of all SALNs,” he mentioned.

“They weaponized the SALN against Chief Justice Sereno, tapos ayaw nila ilabas yung sa Pangulo (yet they don’t want to release the president’s)?” he added.

De Leon pushed for the issuance of Duterte’s SALN amid corruption allegations in the multi-billion-peso contract awarded to Pharmally for the procurement of medical supplies.

The right of the People to access the SALN of the PresidentLate last year, I, together with Attys. Josef Leroi Garcia …