Volcano that wiped out town in Colombia is active again 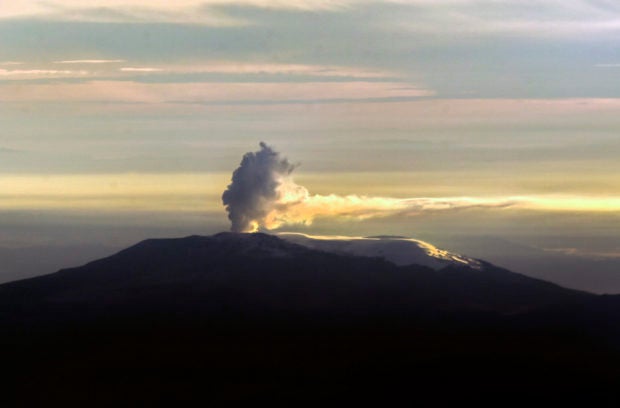 Aerial view of the Nevado del Ruiz volcano showing a plume of smoke photographed at dawn from the window of an airplane on November 29, 2018 in Colombia. AFP

BOGOTA — A volcano that destroyed an entire town in Colombia with the death of some 25,000 people spewed ash and gas this weekend on the 36th anniversary of that devastating eruption.
The Nevado del Ruiz volcano showed “noticeable” activity starting Saturday, the Colombian Geological Service said.
The Nevado del Ruiz in western Colombia is one of the many volcanoes on the Ring of Fire, a path around the Pacific basin characterized by active volcanoes and frequent earthquakes.
In late 1985, after decades lying dormant, this one began to rumble.
And on November 13 it erupted, emitting so much heat that it melted the snow that caps the mountain permanently.
This triggered a cascading wall of mud that swallowed the town of Armero, killing half its population of 50,000.
Etched in the memories of Colombians and people around the world is footage of 13-year-old Omayra Sanchez, who was trapped in the debris of her destroyed house with water and mud up to her neck. She spent three days that way, until she finally died.
The eruption was considered the worst natural disaster in Colombian history and one of the deadliest volcanic eruptions of the 20th century.
Now, Nevado del Ruiz has been in “a period of instability for more than 11 years,” the geological service said.
ADVERTISEMENT
FEATURED STORIES
NEWSINFO
IATF places 4 provinces under Alert Level 4
NEWSINFO
Vico Sotto rebuts vice mayor: ‘Did I say anything about his family?’
NEWSINFO
Marcos a no-show in TV interview of top presidential bets