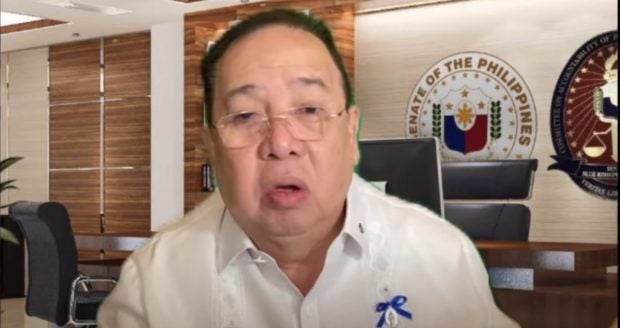 MANILA, Philippines — The arrest of the Dargani siblings at the Davao International Airport shows that the Senate is an independent body and not a mere “paper tiger,” and that the enforcement of its rules is not confined to its chambers, Senator Richard Gordon said.

During Monday’s plenary session, Gordon also lauded the leadership of Senate President Vicente Sotto III and the quick action of the Office of the Sergeant-at-Arms, led by Sergeant-at-Arms retired Maj. Gen. Rene Samonte, which he claimed were crucial to the capture of Pharmally Pharmaceutical Corp. executives Mohit and Twinkle Dargani, who have both long eluded the Senate.

“The Senate President — everybody — the Minority Floor leader, especially and all the other members of the committee, yours truly, have been on the ball in order to protect the integrity of the Senate from intrusion of its independence, to make it appear as if we’re just a paper tiger with no teeth, that we could not enforce our rules, our laws even beyond the halls of the Senate,” Gordon said during Monday’s plenary session.

“Ginawa rin nila General Samonte at ng mga tao natin sa OSAA ang kanilang tungkulin, going beyond the borders of Manila going to the City of Davao, and being able to effect the capture of these siblings, to show the whole world, to show the whole law enforcement community, na kung gusto maraming paraan, kung ayaw maraming dahilan, and that the rule of law prevails upon our country,” he added.

Gordon, who chairs the Senate blue ribbon committee which has launched a motu proprio investigation on irregularities in the procurement of pandemic supplies, has cited both Mohit and Twinkle after they left the online hearings despite being onboard minutes prior.

They were ordered arrested last October 19, but went into hiding afterwards.

For the arrest of the siblings on Sunday night, Gordon moved that Sotto, OSAA, Samonte, and staffers of the blue ribbon committee be commended.

Senators present during the plenary session for the budget did not object, and the unnumbered resolution was approved subject to style.

“I would like to move that we commend our staff, particularly General Rene Samonte, formerly of the Philippine Air Force, and certainly all the OSAA members and give them a very good abrazo, a good pat in the back.  They don’t need it because they’re honorable people, they show their integrity,” Gordon said.

Pharmally remains at the center of the Senate’s investigation on the deficiencies in the Department of Health (DOH0 COVID-19 funds amounting to P67.32 billion.

The deficiencies were spotted by the Commission on Audit (COA), including over P42 billion fund transfers made by DOH to procuring agencies like the Procurement Service of the Department of Budget and Management (PS-DBM).

PS-DBM, headed then by former officer in charge Lloyd Christopher Lao, then allocated over P8.6 billion of the funds to Pharmally, despite it having a small paid-up capital of P625,000.

There are also accusations that Pharmally’s equipment were overpriced, like in the case of face masks sold at over P27 per piece in April 2020, when other companies offered a price of P13 per piece.