Robredo insists: We’re not bothered by other aspirants’ movements 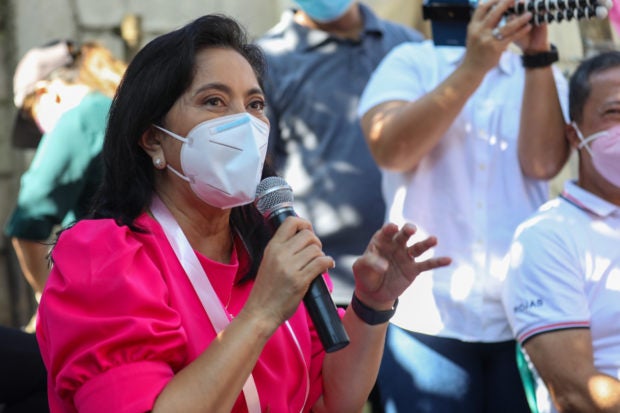 Vice President Leni Robredo in one of her visits in Negros Occidental. FILE photo / Jay Ganzon of OVP

MANILA, Philippines — Vice President Leni Robredo maintained that her campaign for the presidency would focus on the people, saying that they are not bothered about what is happening in other aspirants’ camps.

Robredo said in an ambush interview with reporters in Cebu on Friday that she believes their movements should not be influenced by external matters — that is, the possible candidacy of Davao City Mayor Sara Duterte-Carpio or any other withdrawal and substitution scenarios.

“Ako kasi laban lang namin iyong inaasikaso namin (We are only attending to our own fight),” she said after being asked who between Duterte-Carpio and former senator Bongbong Marcos would be a more difficult opponent in the presidential race.

(For us, when we decided, we were already expecting such scenarios.  We were expecting that but I don’t think that our movements should be affected by external decisions. For us, it is what we should focus on is clear that’s why we are not bothered.)

Robredo was also asked to comment on the possibility raised by some personalities that Duterte-Carpio and Marcos — long rumored to be a strong tandem for the 2022 national elections — should just enter into a term-sharing agreement if they cannot decide who will run as president and as vice president.

The Vice President said she does not want to make any comment, but stressed that such a provision does not exist under the 1987 Constitution — which provides six year terms for presidents.

(I don’t want to make comments because I’m not a part of it.  But term-sharing for a president and the vice president, it is not possible under the Constitution because we are voting for candidates on a six-year term.)

(We are voting for a president and a vice president who would govern for six years.  This is not subject to any internal arrangements.)

Last Tuesday, Davao vice mayoral candidate and Presidential son Sebastian Duterte withdrew from the race.  This was followed by his sister — Duterte-Carpio — withdrawing her candidacy too, for Davao mayor.

Since then, there were speculations that Duterte-Carpio is targeting a national post: the Mayor’s friend and Albay 2nd District Rep. Joey Salceda said that he is sure that Duterte-Carpio will run for president — adding that it had been her desire as early as May 2022.

READ: Sara will likely run for president, no VP option for her — Salceda

READ: Sara changed her mind? She wanted to be president since May, says Salceda

While no agreement has been released publicly, supporters of both Marcos and Duterte-Carpio have urged them to run as a tandem, for a higher chance of clinching the elective post.  On Thursday, the two — who also met “coincidentally” in Cebu last October 24 — were spotted during the wedding of Senator Bong Revilla’s daughter.

Robredo is running in the 2022 national elections for president, as she seeks to prevent the return of the Marcoses to Malacañang and at the same time, a leadership similar to President Rodrigo Duterte’s style.

The Vice President has been a staunch critic of the government, including its pandemic response, which she thinks needs a lot of improvement.