Sara will likely run for president, no VP option for her — Salceda 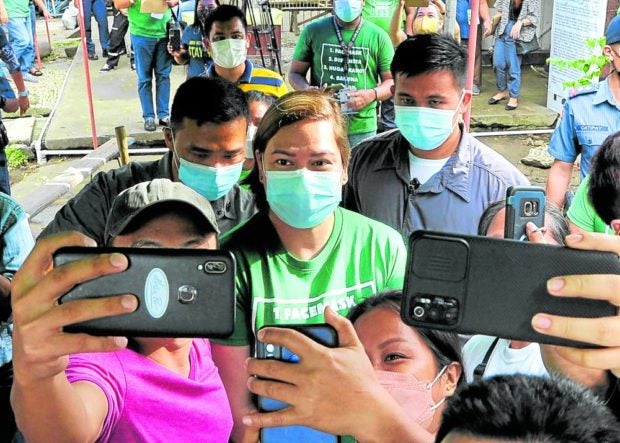 AFTER ALL THE DENIALS… Mayor Sara Duterte poses for a selfie outside the Commission on Elections office in Davao City after she withdrew her certificate of candidacy for mayor on Tuesday. —BING GONZALES

MANILA, Philippines — Davao City Mayor Sara Duterte-Carpio will likely aim for the presidency, Albay Rep. Joey Salceda said Wednesday, after the presidential daughter decided to withdraw her reelection bid before the local Commission on Elections (Comelec) office in her city.

Salceda, in an interview on ABS-CBN News Channel, opined that a vice presidential run is not an option for Duterte-Carpio amid speculations that she might team up with another presidential aspirant, former Senator Ferdinand “Bongbong” Marcos Jr.

“Kasi may presumption kami that she’s running for president… there is no VP option for her. And picking a VP for her is not a problem,” Salceda said in an interview on ABS-CBN News Channel.

He said he last spoke with Duterte-Carpio on Tuesday when she withdrew her candidacy for reelection.

“Based on our long-running chats, kilometric chats that she eyes… because I provided her with so many data, data analytics, and everything about her prospects. I think she will make a good president,” Salceda added.

Asked why Duterte-Carpio, who has maintained she will run for reelection in 2022, changed her mind about her election plans, Salceda said she “wanted to be president in the first place since May.”

“There is that unyielding firmness to purpose. Ang dami, everything thrown at her from the side of her father. Ayoko nang pagusapan sana yan because tapos na yan, di na dapat pagusapan,” he said.

“There were just stumbling blocks towards it. So in order to clear it, di naman niya pwedeng diktahan ang tatay niya. So she had her way of clearing these roadblocks. She wanted to be president,” he added.

The presidential daughter, who chairs regional party Hugpong ng Pagbabago, may likely run under Lakas-CMD, according to Salceda.

Her decision to withdraw also fueled talks that she may run alongside former Senator Ferdinand “Bongbong” Marcos Jr., who is running for the presidency.

But Salceda said this is mere “speculation.”

“That’s a speculation because she’s running for president, all these political gyrations just shows that she’s moving towards the presidency,” he added.