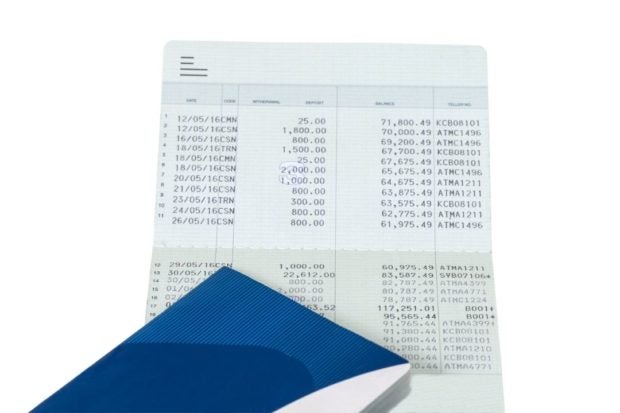 This is a stock photo of a bank passbook

MANILA, Philippines — If Luisito “Louie” Redoble wins a congressional seat for the lone district of Las Piñas City, he would push for amendments to the country’s bank secrecy law to exclude elected public servants and government officials involved in projects amounting to at least P1 billion.

He also wanted official election candidates and companies “engaged in the exploration of public and private lands” to be exempted from the Bank Secrecy Law or Republic Act No. 1405.

“Once elected into office as Congressman…I will file a bill in Congress to amend the ultra-strict provisions of the bank secrecy law,” he said in a virtual briefing held by the Rotary Club of the Muntinlupa Business District on Friday afternoon.

The law prohibits the disclosure and inquiry of deposits in any banking institutions, subject to exceptions. As a matter of practice, the law says depositors can only waive the secrecy of their deposits in writing in which they must indicate their name, specific bank account, bank branch, the period covered by transactions, and name of the person authorized to access the account, according to Redoble.

But, for him, the law should not cover “candidates vying for public office as soon as they file their certificates of candidacy; officials elected into office; department heads who have directly approved or co-approved a government project with a single contracted bid of P1 billion and up; and firms engaged in the exploration of public or private lands.”

He asserted that: “…The best measure to mitigate financial corruption is to repeal or amend the ultra-strict provisions of the existing bank secrecy law.”

Redoble then cited the ongoing Senate investigation on the Pharmally controversy, which, according to him, is “likely to end in the same way as similar investigations conducted by legislation, with [suspects] running scot-free with the people’s money.”

His position on bank secrecy is aligned with the stance of the Kapatiran Party, a national political party that has endorsed him as a congressional candidate, on the matter.

BOC has no records of 2 luxury cars acquired by Pharmally execs, senators learn