BOC has no records of 2 luxury cars acquired by Pharmally execs, senators learn 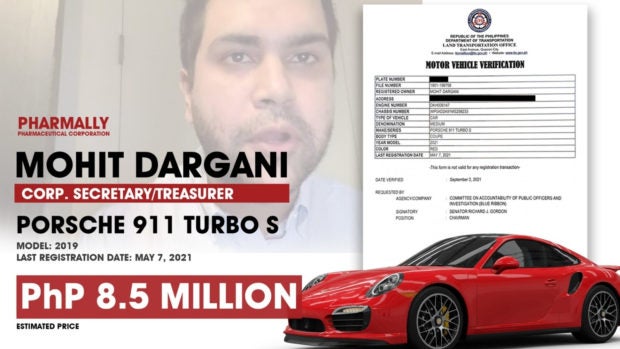 During the Senate plenary deliberations on the 2022 budget, Sen. Sonny Angara relayed to other senators information from BOC Commissioner Rey Leonardo Guerrero about the luxury vehicles registered to Pharmally executives.

“According to him [Guerrero], all of the vehicles have appeared in their records as having gone through the process — the legal processes — and the payment of taxes and duties except for the 2021 Porsche 911 Turbo S and the 2021 Lexus RCF,” Angara said.

Angara, chairman of the Senate finance committee, was defending the budget of the Department of Finance, under which is the BOC.

The information on the vehicles were requested by Sen. Richard Gordon, who chairs the blue ribbon panel.

The blue ribbon panel has been investigating the government’s purchases of medical goods, including allegedly overpriced face masks, face shields, and other supplies, at the height of the pandemic last year.

In the course of the inquiry, senators repeatedly questioned the Department of Health’s transfer of P42 billion to the Procurement Service of the Department of Budget and Management for the purchase of pandemic response supplies.

A portion of this amount went to over P8.6 billion worth of contracts awarded to Pharmally. Senators doubted the financial capacity of the firm since it was only established in 2019 with a small capital of P625,000 when it secured the supply deals.