World has become deaf to plight of the poor, Pope Francis says in Assisi 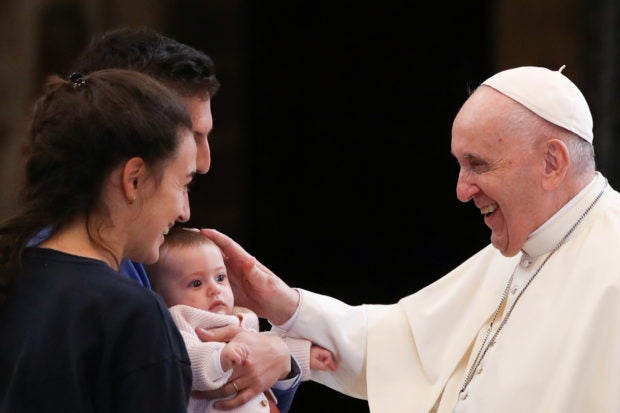 Pope Francis greets a family as he meets with people who have made a pilgrimage to the Assisi, during a private visit, ahead of World Day of the Poor, at Santa Maria Degli Angeli Basilica, in Assisi, Italy, November 12, 2021. REUTERS/Yara Nardi

ASSISI, Italy — Pope Francis said on Friday that the world had become deaf to the plight of the poor and condemned those who become disproportionately rich while blaming the needy for their own fate.

The Pope traveled to Assisi, the birthplace of St. Francis, to meet with about 500 poor people before the Catholic Church’s World Day of the Poor which will be marked on Sunday.

“Often the presence of the poor is seen as being annoying and something to be tolerated. Sometimes we hear it said that those responsible for poverty are the poor themselves,” he said in the Basilica of St. Mary of the Angels after poor people, including Afghan refugees, recounted their personal stories.

“The blame is dumped on the shoulders of the poor, adding insult to injury, so as not to make a serious examination of conscience about one’s own actions, about the injustice of some laws and economic measures, about the hypocrisy of those who want to enrich themselves disproportionately,” he said.

Pope Francis, who in 2013 became the first Latin American pope, has made defense of the poor a cornerstone of his pontificate. The former Cardinal Mario Bergoglio is the first pope to take the name Francis, the saint who dedicated most of his life to the poor.

“It is time to give a voice back to the poor because their requests have fallen on deaf ears for too long. It is time for eyes to open to see the state of inequality in which so many families live,” he said.

“It is time to again be scandalized by the reality of children who are starving, reduced to slavery, tossed around by the waters as they risk drowning, innocent victims of all kinds of violence,” he also said.

He called for the creation of more jobs and an end to violence against women “so they are respected and not treated as merchandise.”

Qadery Abdul Razaq, an elderly man who fled Afghanistan with his wife after the fall of Kabul because they had worked for the Italian military, broke down into tears as he told the pope how the Taliban had killed one of his sons.

He asked for help from the pope and the Italian government to get his four remaining children out of the country.