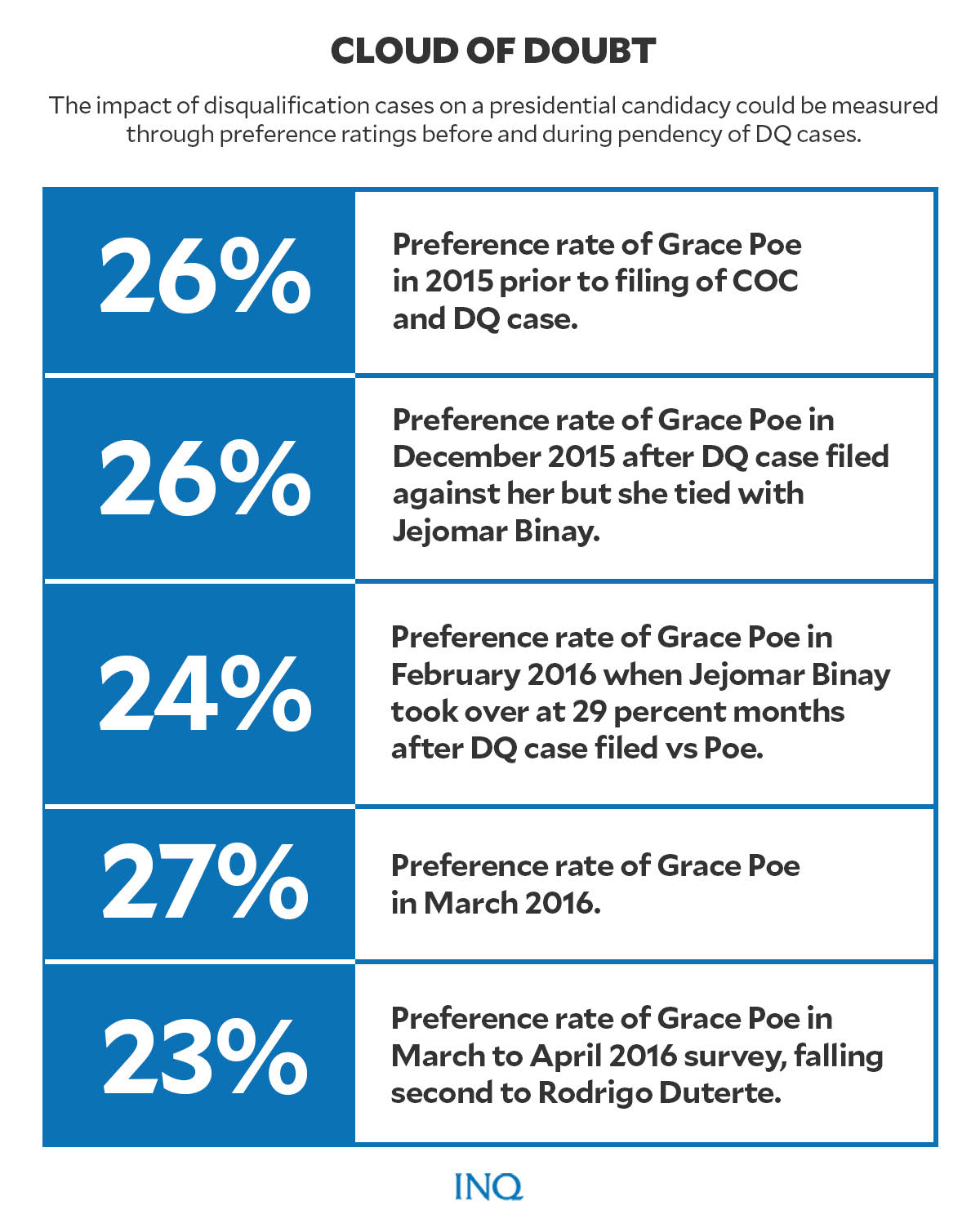 MANILA, Philippines—The fixation on death penalty as a solution to criminality has consumed a major component of President Rodrigo Duterte’s plan for the nation and drawn the support of many legislators, including three senators—Panfilo Lacson, Vicente Sotto III and Manny Pacquiao—who are now running for higher positions.

“I’ll bring back the death penalty.” Since Duterte uttered those words on the campaign trail, the bid to revive capital punishment continued to be a key program of his administration.

The push to bring back capital punishment was made despite numerous studies concluding that death penalty was not a deterrent to crime and international organizations reminding the Philippines of its commitment to protect life.

Amnesty International, Nobel Peace Prize winner in 1977, said the death penalty was “ultimately cruel, inhuman, degrading, and should be opposed without exception.” Those words would fall on deaf ears, though.

The President, in his State of the Nation Address in 2017, 2019 and 2020, asked Congress to revive the death penalty, saying it would not only end criminality but save children from drugs.

Carlos Conde, researcher of Human Rights Watch (HRW), told BBC News in 2020 that with Congress heeding most of the President’s instructions, including those on the now controversial Anti-Terrorism Act, the return of death penalty “is as good as passed.”

But less than a year before the 2022 elections, a miracle happened. Prominent supporters of the death penalty revival took a detour and saw the light. Fix the justice system first, they agreed.

Last Nov. 8, Pacquiao blinked after saying in 2020 that the death penalty was “not illegal.” He said he was “holding” the bill he filed to revive capital punishment because of injustice in the Philippines.

READ: Pacquiao blinks on death penalty but firm on stand vs same-sex marriage

“I don’t want innocent people to be punished by death. So we want to fix first our judicial system in this country and arrange everything and make sure that the government is performing its duty,” he said.

Pacquiao, in 2019, filed Senate Bill No. 189, which proposed amendments to Republic Act 9165 to impose death penalty and increase penalties for heinous crimes involving the manufacture and trafficking of drugs.

In 2020, Pacquiao said, executing a criminal was not illegal in the eyes of God and government. He cited the Bible as saying that governments were allowed to impose the death penalty because God had commanded it especially to mete out justice in cases of heinous crimes.

Lacson said he changed his mind after watching “The Life of David Gale,” a film shown on Netflix about a professor who was convicted and condemned to death for the alleged killing of a workmate.

Lacson said the movie changed his perspective and he now considered it important to save wrongly convicted persons.

“My eyes were opened that it is more important to save the life of someone innocent than to execute someone who is really convicted and proven to have committed a crime,” said Lacson, explaining how the movie changed his mind.

In 2019, Lacson, former chief of the Philippine National Police, filed Senate Bill No. 27 to revive the death penalty which said there was an alarming rise in heinous crimes and setting conditions for capital punishment to be meted out.

“The alarming rise in heinous crimes in recent years has shown that reclusion perpetua, in lieu of death penalty, is not a deterrent to grave offenders,” said Lacson in the bill’s explanatory note. 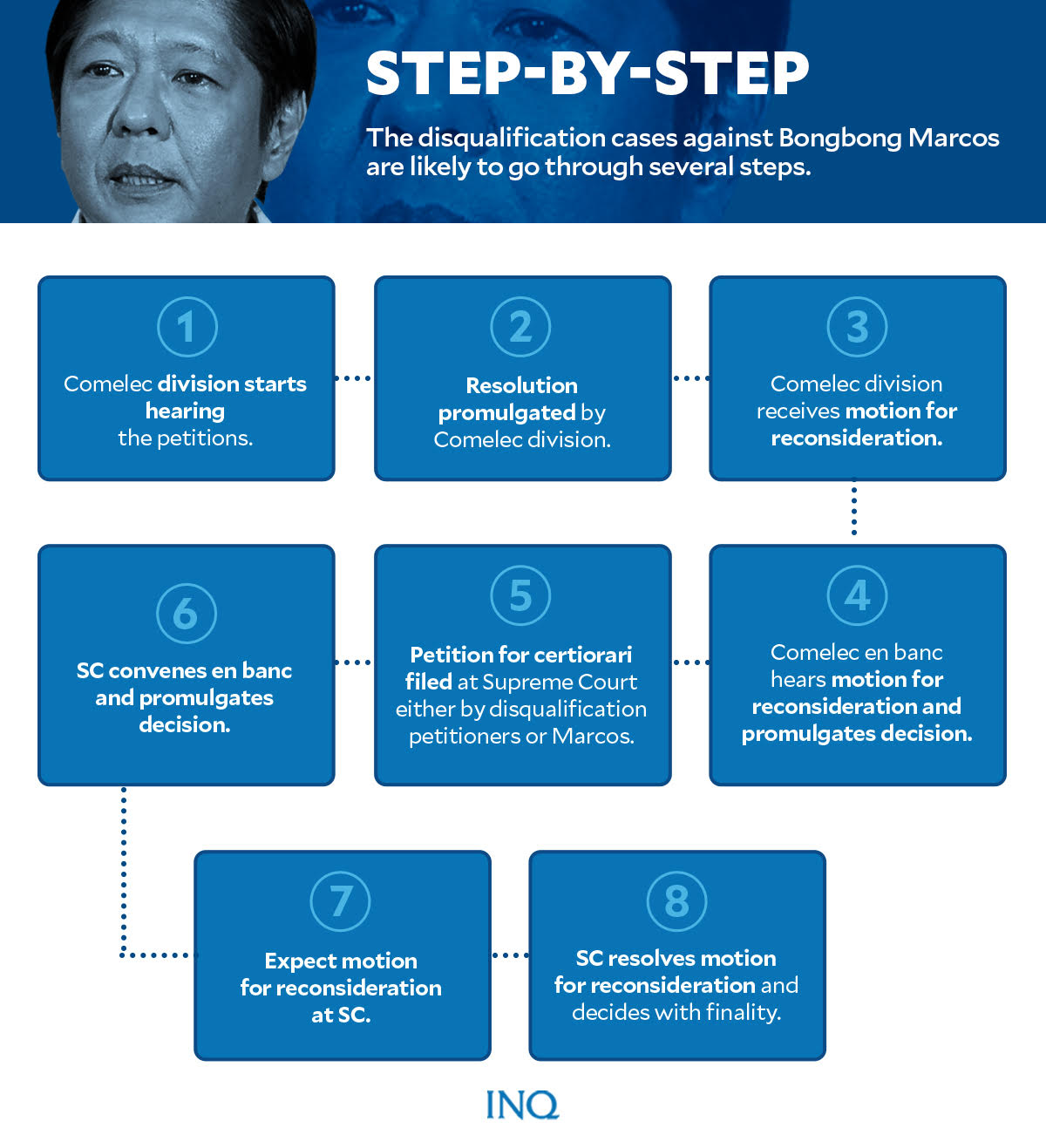 The website of John J. Carroll Institute on Church and Social Issues (JJCICSI) said the Supreme Court, in 2004, reviewed 907 major convictions between 1993 and 2004. In 1993, the death penalty was first imposed.

It said out of the 907 convictions, the high court found that 71.77 percent, or 651, were wrong. A 2017 INQUIRER.net report said the review also led to the revision of penalty for 555 convicted persons, acquittal for 65 and dismissal of cases for 26. 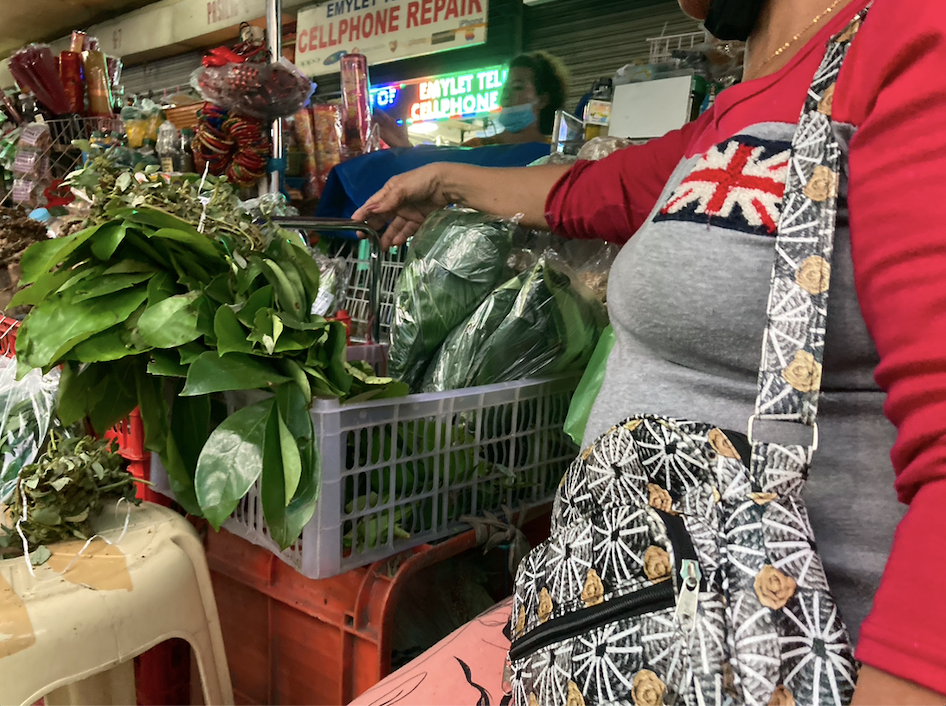 Last Nov. 9, Lacson withdrew the bill and asked the Senate secretary—lawyer Myra Villarica—to pull the bill out of consideration by the chamber. He said he now supported life imprisonment and penal reforms.

Like Lacson, Sotto also changed his mind, saying that while the individuals who backed the revival of death penalty were right in most of their arguments, “I found a better solution”––penal reforms.

In 2020, when Congress was asked to bring back the death penalty, he said: “While personally, I support the passage of a death penalty law, my count in the Senate tells me that it will face a very rough sailing in the upper chamber.”

Elated by the change in Lacson’s and Sotto’s stance, the Catholic Bishops Conference of the Philippines’ Episcopal Commission on Prison Pastoral Care said it will boost the fight against death penalty.

“Coming from two prominent and veteran legislators, this will boost the Church’s advocacy against any moves to reintroduce capital punishment in our statute books,” said Legazpi Bishop Joel Baylon.

He said the Church stand remains—it is not the severity of the penalty, but the certainty of accountability that deters crimes.

The Commission on Human Rights (CHR) also commended Lacson and Sotto, saying that their change of heart was “a win for the sanctity of life.” The CHR said any deliberate taking of a human life was wrong.

It reiterated its consistent stand on death penalty: Any act that deliberately ends the life of a person is inherently wrong. The death penalty violates human dignity and goes against the basic principles of human rights.

Amnesty International said the Philippines was one of 14 nations in Asia that have discarded the death penalty for all crimes. The 1987 Constitution prohibits “cruel, degrading, or inhuman” penalty.

The Constitution also stated that “neither shall the death penalty be imposed, unless, for compelling reasons involving heinous crimes, the Congress hereafter provides for it.” In 1993, Republic Act No. 7659 imposed death penalty for heinous crimes.

However, in 2006, Republic Act No. 9346 struck death penalty off the list of penalties prescribed by penal laws. In 2007, the Philippines ratified the Second Optional Protocol to the International Covenant on Civil and Political Rights.

This required nations to “abolish the death penalty.” HRW explained that “nations that are parties to the covenant and the protocol cannot reinstate death penalty without violating their obligations.”

Amnesty International said nations with death penalty say it was a way to deter people from committing crime, but this has been repeatedly discredited. It said there was no evidence that death penalty deters crime.

‘Wanting to be safe’

The Social Weather Stations, in 2018, said in a survey result that nearly six in 10 Filipinos agreed that the death penalty should be reinstated in the Philippines––59 percent agreeing (42 percent strongly agreeing while 17 percent somewhat agreeing). 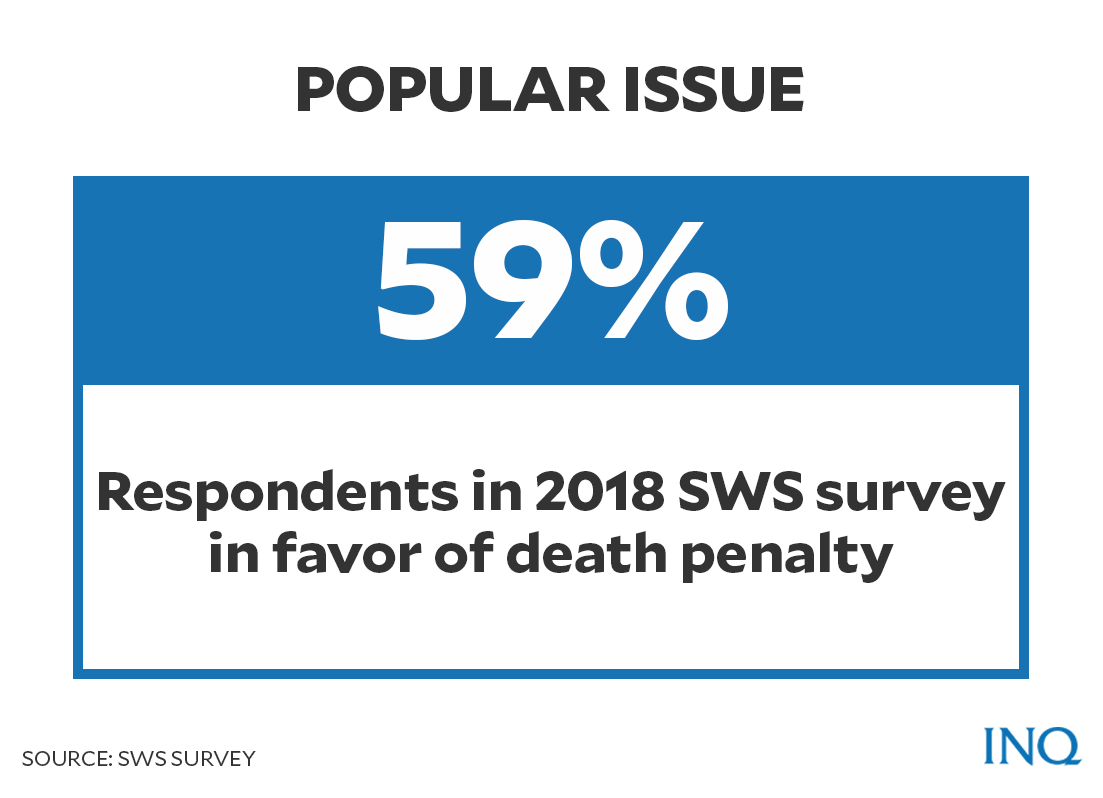 The JJCICSI also said a 2004 study explained the motives for many crimes. It showed that the more stable the economy, the fewer the crimes as the economy improves in urban and rural areas leading to higher incomes, lower prices and better education. 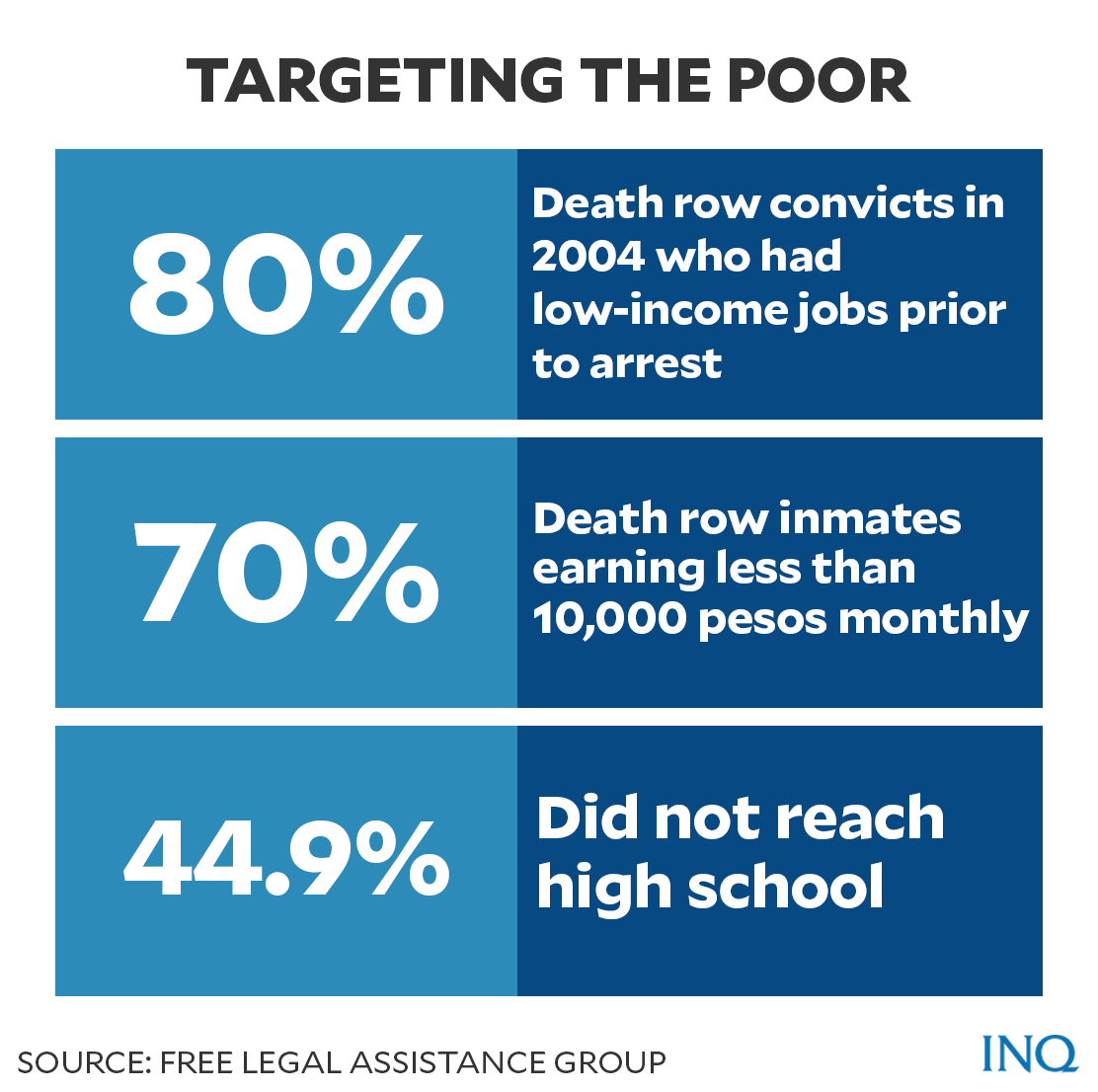 It said over 80 percent of death row convicts worked in low-income jobs as transport, construction or agricultural workers prior to their arrests.

Over 70 percent said they earned less than P10,000 a month at the time of their arrest. Nearly half, or 44.9 percent, did not reach high school.

CHR prods Congress not to push for death penalty