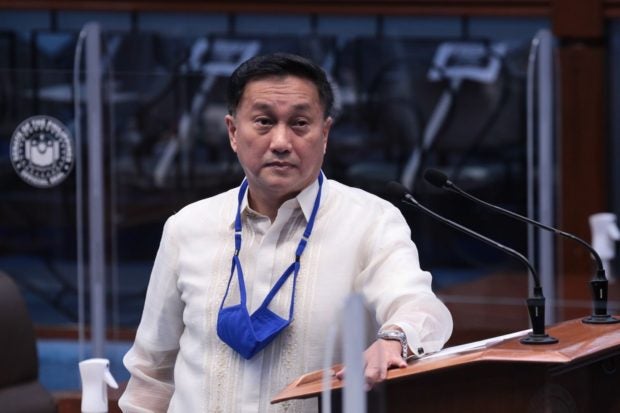 Sen. Francis “Tol” Tolentino waits for a reply after asking a question during a Senate deliberation. Voltaire F. Domingo/Senate PRIB

MANILA,  Philippines — Local government units (LGUs) may withhold the Christmas bonuses of their unvaccinated workers since they enjoy the privilege of autonomy, senators were told on Thursday.

Officials of the Department of Budget and Management offered this explanation after Senator Francis Tolentino inquired during a Senate budget hearing if the “no vaccination, no Christmas bonus” policy for government workers in Cebu City was correct.

“According to the DBM representatives…pwede naman ho daw because LGUs enjoy autonomy and what they provide in the budget circular is just a minimum criteria,” said Senator Sonny Angara, who was defending the DBM’s budget as chairman of the Senate finance committee.

Tolentino pressed further, asking if the policy was in accordance with the law pertaining to the salary schedule of government workers and authority to grant additional benefits.

“As long you’re in compliance with RA 11466— you provide with your bonus,  you provide your yearend bonus, the Christmas bonus can be separated because  it’s a separate act of liberality coming from  an LGU?” he said.

Angara answered  in the affirmative: “Yes they have to comply with the national policy apparently.”

(I’m asking that because many employees of local government, national government including this Senate, are listening.)

(No vaccination, no Christmas bonus or it’s up to agencies?)

At this point, the panel head offered his own  opinion, saying that a yearend bonus lumped in with any additional amounts is a “legal entitlement” that does not require vaccination.

“But if there’s any amount that is on top of that that is an act of liberality of the granting authority,  then that can be subjected to conditions,” Angara pointed out.

Tolentino  admitted that he himself was confused about the new policy as he lamented the seeming “lack of reaction” from the DBM.

DBM, he said, should have been proactive, and should  have clarified the issue even before the Cebu City announced its new policy.

“They should issue an appropriate circular clarifying all of these. Christmas is fast approaching,” the senator stressed.