CHR prods Congress not to push for death penalty 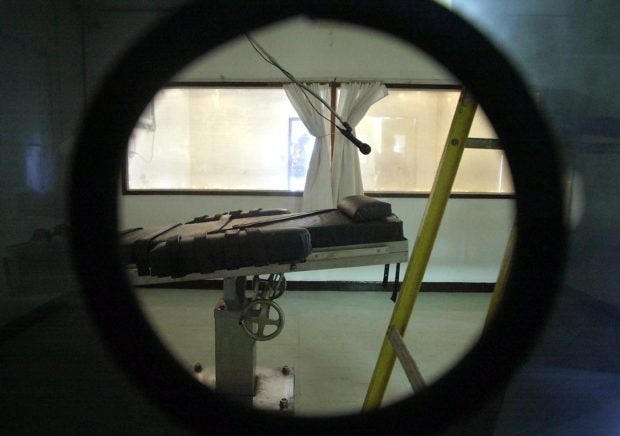 View from inside the lethal injection chamber at the National Penitentiary in Manila, 09 January 2004 following President Gloria Arroyo’s declaration that she would allow two death row convicts to be executed later this month in order to teach kidnapping syndicates a lesson. Arroyo’s order reverses a moratorium panning executions imposed in 2000. AFP PHOTO/Joel NITO (Photo by JOEL NITO / AFP)

MANILA, Philippines — The Commission on Human Rights (CHR) on Friday urged Congress to scrap all pending proposals seeking the reimposition of death penalty in the country after its main proponents, running mates Sen. Panfilo Lacson and Sen. Vicente Sotto III, admitted they have changed their minds about capital punishment.

In a statement, Commissioner Karen Gomez-Dumpit welcomed the senators’ statements abandoning their support for death penalty after a Netflix crime show “opened their eyes” about the possibility of ending the life of an innocent person.

Before this, Lacson and Sotto, who are running for president and vice president, had been staunch champions of capital punishment for heinous crimes.

Their statements, Gomez-Dumpit said, “was a win for the sanctity of life.”

“We also hope that this is enough to turn the tide in the Senate and halt the proposals to reintroduce capital punishment in the country. We ask other legislators who have given their support for this counterproductive measure to reconsider their position and urge them to affirm the right to life and dignity of all persons,” she added.

The CHR has long maintained that capital punishment, which was abolished during President Gloria Macapagal-Arroyo’s term in 2006, runs counter to the basic principles of human rights and is an ineffective deterrent to crime.

Moreover, an October 2020 study by the CHR also showed that seven out of 10 Filipinos, when provided with alternative punishments other than the death penalty, would not support capital punishment.

Overall, however, only three out of 10 Filipinos have expressed the strongest support for the death penalty.

This could mean public support for capital punishment may actually just reflect the “policy inclinations of the government, only because the government framed the death penalty as the only solution without providing options for alternative punishments,” the research concluded.

“The Commission’s study revealed that the support for death penalty mainly lies in wanting to be safe and secure. The heightened fear of becoming a victim to a crime is pushing Filipinos to support harsher penalties. However, the harshness of the penalty is not a deterrent but the certainty of punishment,” Gomez-Dumpit said.