‘Renewal of friendship:’ Duterte meets with Pacquiao for first time since rift 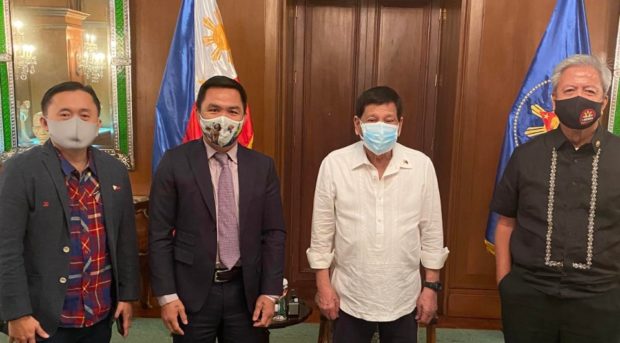 MANILA, Philippines — President Rodrigo Duterte and presidential aspirant Sen. Manny Pacquiao had a “renewal of friendship” and met for the first time since the infighting in PDP-Laban to discuss “certain matters related to people’s interest.”

Duterte and Pacquiao, who belong to feuding factions within the ruling party, held a meeting Tuesday night in Malacañang, both the Palace the senator’s staff confirmed to reporters Wednesday.

“It is a meeting between national leaders who discuss certain matters related to people’s interest and Mindanao development. Specifically, infrastructure and power industry,” Pacquiao’s office said.

“It was a short and cordial meeting…There was no talk of politics,” presidential spokesperson Harry Roque said in a separate statement.

According to Go, the meeting was “very quick” and was held at the request of Pacquiao’s camp.

(Just a simple meeting. Renewal of friendship, no politics. What’s important is they talked. And for me and Manny, we are friends.)

Duterte and Pacquiao have been at odds with one another since after the senator criticized the president’s “lacking” stance on the country’s sea dispute with China.

Duterte and Pacquiao are also the prominent figures in the rift between two factions of the PDP-Laban, which yielded two sets of presidential and vice presidential candidates for the 2022 polls.